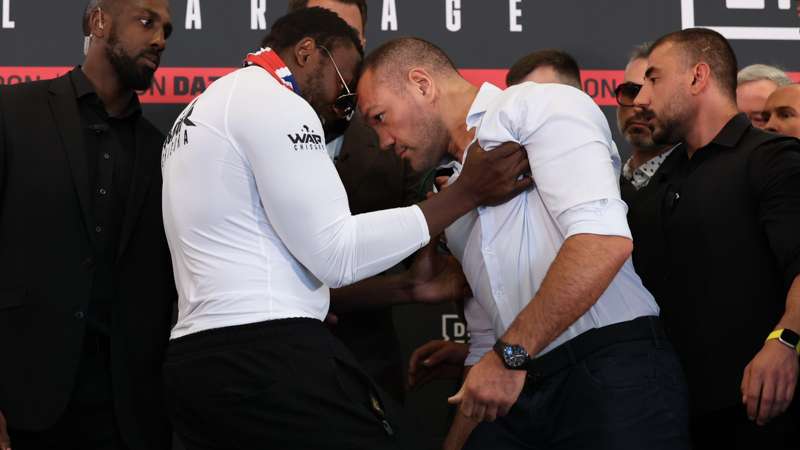 What each heavyweight must do to be successful at the O2 Arena in London and live on DAZN this weekend.

When Derek Chisora and Kubrat Pulev first clashed back in Hamburg, Germany in May 2016, "The Cobra" unleashed a jab fest and rode his weapon of choice to a split-decision victory. Although one judge inexplicably saw it for Chisora, it was pretty clear that Pulev should have comfortably won via a lopsided unanimous decision.

Anyhow, with that bout being for the European heavyweight title, this re-up will be for pure guts and pride. Chisora (32-12, 23 KOs) and Pulev (29-2, 14 KOs) will have their rematch Saturday night, live from the O2 Arena in London, England, and on DAZN.

With bragging rights and honor on the line, DAZN listed the keys to victory for both Chisora and Pulev in this heavyweight rematch.

Keys to victory for Derek Chisora

Sully up the fight immediately with aggression

Chisora laid down the gauntlet during the fight’s press conference earlier in the week: “Let’s f—ing go for it.” If that’s not an invitation to a fire fight, nothing else will be. But if Chisora truly wants to get Pulev off his back foot and away from picking him apart with the jab, he’s got to bring the “War” to the Bulgarian. And the only way to do that is to sully up the fight immediately with raw aggression. That aggression may prove to make Chisora vulnerable at times, but if he truly wants to go for it as touted, he must unleash forward-moving force on Pulev without taking a step back.

Get inside of Pulev’s reach, clinch if need be

Standing six-foot-two to Pulev’s six-foot-four, Chisora has to work to get inside of the Bulgarian’s six-inch reach advantage. Getting inside early will go long ways toward negating the same jab that Pulev employed and rode to victory over six years ago in their initial fight. Obviously, that’s going to be an easier said than done task for “War” Chisora, but the British boxer has to force cramped quarters by any means — even resorting to clinching early if need be.

Uppercut in the clinch

It shouldn’t take too many rounds for Chisora to gauge his comfortability and difficulty in getting inside on Pulev. Well, once he’s locked in the clinched phonebooth with “The Cobra,” Chisora should look to unload a compact uppercut to damage the taller foe. Anthony Joshua found success with the weapon against Pulev in victory nearly two years ago. Chisora might find paydirt with the same shot. Adding to that thinking is Pulev being 41 and possibly a step slower. When Pulev is looking to jab his way out of the clinch to reassert space, it might be the perfect timing for Chisora to blast him with a counter uppercut right up the middle.

Keys to victory for Kubrat Pulev

Pulev touts a six-inch reach advantage over Chisora and he’s got to use that as leverage in this rematch Saturday night. Asserting the jab early will allow the Bulgarian to do just that. Plus, the jab will empower Pulev to maintain a healthy distance and pick Chisora apart from the outside. Enough of keeping Chisora at the end of a constant stick could work wonders toward softening up the British heavyweight and banking rounds.

Work in the uppercut

If Pulev asserts that jab early, he can begin to splice in an uppercut behind it. Pulev found a home for the right uppercut in their original clash back in May 2016. Getting the timing right and absolutely sitting on an uppercut could spell doom for Chisora if Pulev uncorks the weapon at the opportune time. Pulev isn’t known for his power, but the shot would certainly deposit points for “The Cobra.”

There were moments across their initial fight that Pulev was dominating. Yet, absent from that lopsided victory was Pulev really stepping on the gas and unloading on Chisora. As aforementioned, Pulev isn’t known for his power with 14 of his 29 wins coming by the way of knockout. Yet, at 41-years-old, Pulev’s window for boxing is closing. Why not go for the knockout if he’s sensing that he’s weakened Chisora enough to finish him? It would not only punctuate Pulev’s 30th professional victory, but also give him style points to potentially cap his career just in case he decides to walk away from the sport.