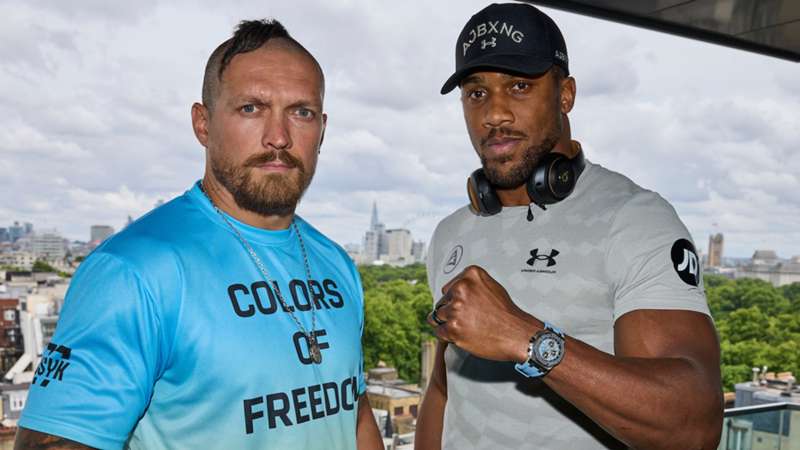 The Matchroom head is preparing for Saturday's fight.

Eddie Hearn hopes to put on the undisputed heavyweight contest in the near future.

Anthony Joshua fights Oleksandr Usyk in Jeddah this Saturday, with the WBA, WBO, and IBF belts on the line.

Joshua has been in Saudi Arabia for a month in preparation after adding Robert Garcia to his training setup and promoting Angel Fernandez to head up his tem.

Speaking to The National, Hearn said he was looking forward to the clash.

“It’s a huge fight to the boxing world and to the kingdom. There’s going to be a lot of great people there, a lot of great fighters, and a huge media presence. The whole world will be watching at Jeddah,” Hearn said. "For us, all we want to see is an Anthony Joshua victory, but it’s going to be a tough fight. He’s prepared fantastically well, and I think we are going to see a brilliant heavyweight fight.”

He continued: “This is a bigger fight than Joshua-Ruiz because Usyk is a pound-for-pound king,” Hearn said.

“He’s probably pound-for-pound No 1. It’s similar that AJ must win because he’s coming after a defeat. He will have very fond memories of that Ruiz fight because he went on to win the rematch, and we believe he can do that again. I’m not just saying it. It’s one of the fights he feels most comfortable about. He has such fond memories of the kingdom because of his time in the Ruiz fight, and also, don’t forget that he’s been out there for four weeks already, and that shows how comfortable he is.”

Hearn added that he hopes Tyson Fury will face the winner of Usyk vs. Joshua.

“It has always been the kingdom’s aim to make the undisputed heavyweight world championship. We aren’t very far away from that with the winner of the Joshua-Usyk fight meeting Tyson Fury for the undisputed championship,” he said. “I think that’s the aim of the kingdom and obviously my aim to see Anthony win on Saturday.”