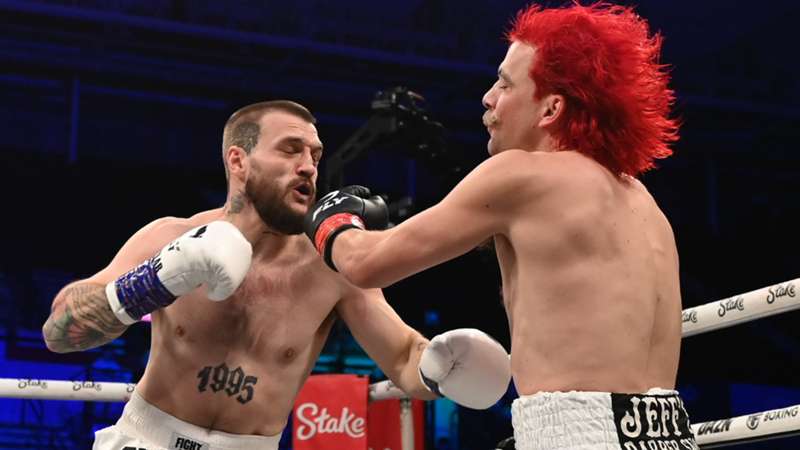 It was a statement victory for the 27-year-old.

Cherdleys joked before heading to the ring that he needed to be home in time for bed, and Jay Swingler delivered.

It took just 1:10 for Swingler to force a stoppage after knocking his opponent down twice in the first round, the second of which was a vicious right-hand shot that sent Cherdleys flying to the mat and prompted the referee to end the match nearly as quickly as it started.

It was the climax of an entertaining night on Saturday in Sheffield, England, for MF & DAZN: X Series 002, where there were several memorable matches. However, the best was saved for last as Swingler came out with a purpose and earned the knockout of the night with a vicious sequence.

"My opponent's crazy," Swingler said after the match before stating he'd "dedicate [his] life to the sport."

In the co-main event, Slim Albaher and Ryan Taylor went the distance, with Albaher on the front foot for most of the match and earning himself a victory via unanimous decision. Albaher called his blood-soaked opponent a "tough m—f—er" in the post-fight interview and said he was looking for bigger and better fights in the new year.

Check out all of the official results from the live blog below, and you can watch the replay right now with a DAZN subscription.

facebook twitter whatsapp
Cherdleys comes out with a huge posse and wearing a flowing robe with freshly dyed red hair, while Swingler enters the ring solo.

Taylor shows an incredible chin as he goes all four rounds and absorbs countless punches, going most of the match covered in blood. However, Slim's technique was superior as he kept Taylor in front of him and dictated the entire bout.

"No one would take those kinds of shots that he did tonight," Slim said of Taylor. "I hit him with some big shots."

Slim's decked out in Brooklyn Nets gear and with Carly Rae Jepsen's "Call Me Maybe" blasting over the loudspeakers, while Taylor enters surrounded by people on bikes and accompanied by a rapper.

Ginty's corner throws in the towel

facebook twitter whatsapp
The fighters traded knockdowns early in the first round, but from then on out, it was all JMX. To Ginty's credit, he took a beating and kept going, but with just under two minutes left in the third, JMX landed several punches that left Ginty out on his feet.

JMX vs. Ginty starts in minutes

facebook twitter whatsapp
Keeley came out aggressive but didn't know how to protect herself, as Wett used several stiff jabs to stun her opponent. Unfortunately, the punches did more damage than it appeared, as Keeley remained in the corner at the start of the second round, giving the victory to the self-proclaimed "queen of UK TikTok" amid a shower of boos from the crowd.

Up next: Astrid Wett vs. Keeley

facebook twitter whatsapp
There's some beef to be settled in the first-ever women's fight in the X Series as British TikTok sensation Astrid Wett faces off with YouTuber Keeley.

Rak-Su was overmatched throughout the fight, getting knocked down on the first punch by Taylor.

That set the tone for the rest of the bout, as Taylor was dominant in all three rounds and wore down his opponent to the point that he was gasping for air at the end of the match.

However, Rak-Su stood tall and took all the abuse thrown his way, even getting up after another knockdown. While he went out swinging, this was a real lesson for Rak-Su.

"My peek-a-boo style, I was going for the knockout. I thought the ref was going to stop it [within the first three seconds]," Taylor said after the match.

facebook twitter whatsapp
It's a Pokemon vs. Dragon Ball Z entrance battle as the fighters each rep their favorite anime brands.

The fighters appeared balanced in the opening two rounds of the three-round contest, but DTG came out in the third and used his aggressiveness and reach advantage to seemingly take over the bout. However, the decision goes to Ham, with DTG looking incredulous when the announcement is made.

Interestingly, the referee, Gareth Morris, was the last to arrive in the ring after an unscheduled delay on his part.

DTG vs. Halam Ham is up first

facebook twitter whatsapp
Hello and welcome to our live text updates service for the MF & DAZN: X Series 002 event, which promises to be a fun and exciting show.