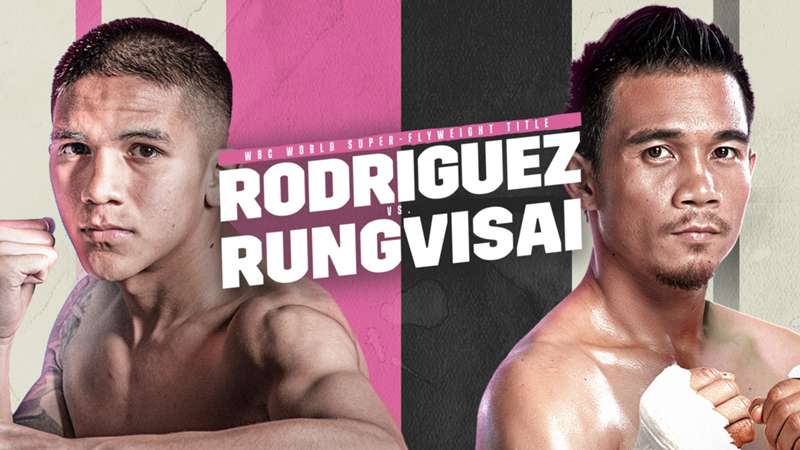 What the WBC world super flyweight champion and the former titleholder must do to be successful Saturday night, live on DAZN.

Jesse Rodriguez stepped up and defeated Carlos Cuadras to become the new WBC super flyweight world champion in February, passing a huge test. Now, the 22-year-old will get another stern challenge. This time it's from two-time former WBC super flyweight champion Srisaket Sor Rungvisai as the two are set to clash at Tech Port Arena in San Antonio, Tex. and live on DAZN (check listing for exclusions) on Saturday night.

With plenty of pop to his punch, it will be intriguing to see if Rodriguez can dismantle a rugged veteran like Rungvisai. With the stakes hitting a fever pitch, DAZN lists the keys to victory for each fighter.

As a former two-time WBC super flyweight world champion, Rungvisai has been at this weight class for quite some time and is comfortable here. He’s got to make Rodriguez feel his power early. That power, with Rungvisai counting 43 of his 56 pro fight victories by knockout, combined with the Thai fighter’s granite chin should go a long way in letting Rodriguez know early that the former titleholder is going to be in front of his face all night long.

Dig to the body

Rodriguez moves swiftly and is able to pack plenty of pop with his punches. To stifle that explosive power and possibly even hinder some of Rodriguez’s speed, Rungvisai could look to make a concerted commitment to digging punches to the young champ’s body. If Rungvisai bogs Rodriguez down, he'll force the pace into being the Thai fighter's kind of bout.

If Rungvisai determines early that Rodriguez's power isn't up to par, he's likely to disrespect it altogether. That's what he did to Roman Gonzalez, punching through traffic en route to uncorking a devastating right hook that spelled lights out for the future Hall of Famer. If he could stand in front of Rodriguez and walk him down, Rungvisai might refer back to that same weapon of choice to damage the young lion.

Rodriguez bends his body at the waist and moves laterally extremely well. He can use those nimble feet to make life difficult for Rungvisai, who at 35 years old is a bit of a stationary target. Being his swift self alone will present problems for Rungvisai.

Inside left hand toward left hook

Despite this bout featuring two southpaws, Rodriguez does an excellent job of landing a left hand inside of opponents’ guards. And it comes with speed and power. The weapon can be used to segue toward a quick right and devastating left hook, which is one of the main reasons the 22-year-old is building a portfolio with the in-ring moniker “Bam!”

Rodriguez does an excellent job slipping, changing levels and exploding upwards with his right uppercut. He did this with ease against Cuadras and Jose Alejandro Burgos before that. It detonates with dynamite as does his left uppercut. Rungvisai might be a bit more susceptible to the right uppercut, though, and if Rodriguez lands it … watch out. It'd mean him stamping another impressive victory and possibly a clash with Julio Cesar Martinez in the near future.