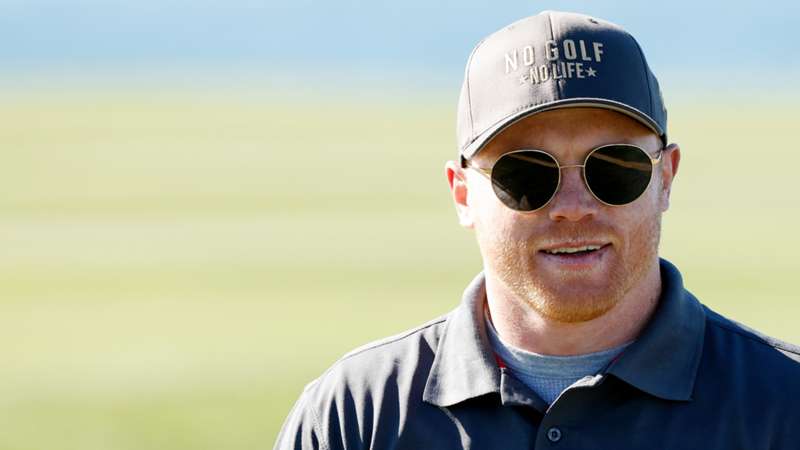 Canelo Alvarez is trading in the boxing gloves for the golf clubs.

Canelo Alvarez puts his IBF, WBA (super), WBC, and WBO super-middleweight titles on the line on Sept. 17 when he meets Gennadiy Golovkin for the third time at T-Mobile Arena in Las Vegas. The trilogy will air live on DAZN PPV in the U.S. and Canada and around the world on DAZN (excluding Mexico, Latin America, and Kazakhstan).

Before that, Alvarez switches sports as he goes to his second love as he competes in the Icons Series golf event on Thursday and Friday at Liberty National Golf Club in Jersey City, NJ.

Alvarez took up golf in 2019 and fell in love with it immediately. He's become just as obsessed with golf as he is with the sweet science. After his win in November over Caleb Plant to become the first undisputed super-middleweight champion, he woke up the following morning and played golf at Shadow Creek Golf Course in Las Vegas.

Now, Alvarez will compete on Team ROW with 11 other active and former athletes against Team USA in three sessions each day with three 10-hole match play sessions per day and the event finishing up in head-to-head singles matches. How will Alvarez fare?

Here is everything you need to know about Canelo Alvarez playing in the Icons Series.

How to watch Canelo Alvarez and Icons Series 2022

It is unknown what times Alvarez will be teeing off.

Here's the lineup for the Icons Series 2022: