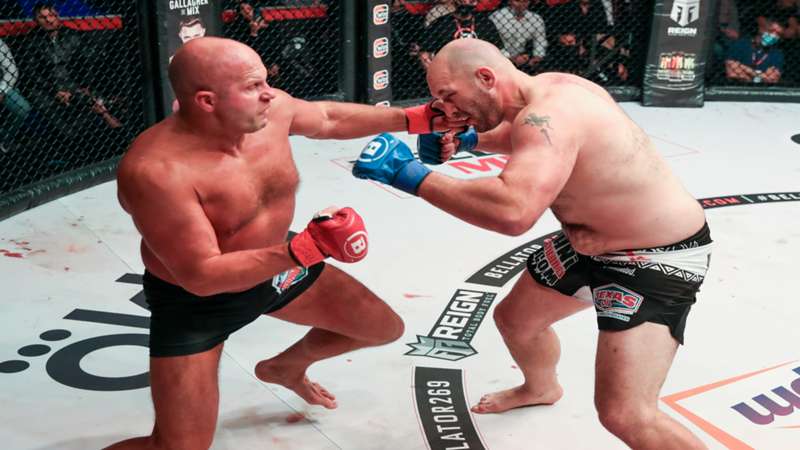 Fedor Emelianenko still has the goods.

Fedor Emelianenko hadn't fought in nearly 22 months heading into Saturday's contest against Tim Johnson. Being 45-years-old and having a significant layoff would typically cause one to have some cage rust and perhaps father time would win out.

Well, Emelianenko prolonged father time for now as a quick three-punch combination, punctuated by a left hook, snapped Johnson's head back on the canvas to end the fight and win by knockout at the 1:41 mark of the first round from VTB Arena in Moscow, Russia, the home country of Emelianenko.

🐐The Last Emperor scores the KO in Moscow!

What a moment for Fedor, in Bellator’s historic first Russian event. #Bellator269 pic.twitter.com/gZq4pH5bMa

Immediately after both guys touched gloves, the crowd erupted with "Fedor" chants for its native Russian. Johnson came out the aggressor and landed a check-left hook to get Emelianenko's attention.

Emelianenko baited Johnson into an exchange. Johnson missed a right hand, and Emelianenko flashed a lightning-quick right hand, left hook, and a right hook to send Johnson crumbling to the canvas with Fedor raising his right hand, knowing the fight was over.

The question is: What's next for Emelianenko?

Emelianenko (40-6, 1 no-contest) has said that his next fight will be his last. However, with a performance like this one, it's hard to see "The Last Emperor" exiting the sport he's reigned over for nearly 20 years.

Here is what happened at Bellator 269: Fedor vs. Johnson.

Crowd was already chanting for Fedor before the action even began.

Johnson tryed to establish the left hand. He landed a solid check left hook. An exchange of shots had neither guy gaining an advantage.

Then in an instant, Fedor slipped a right from Johnson and landed a straight right hand, a left hook and knocked out Johnson at the point of impact with a right hook which snapped Johnson's head back and the fight was waved off.

How a 45-year-old still has those quick hands is quite something and a sight to see.

🐐The Last Emperor scores the KO in Moscow!

What a moment for Fedor, in Bellator’s historic first Russian event.#Bellator269 pic.twitter.com/gZq4pH5bMa

facebook twitter whatsapp
It is time for the main event of Bellator 269 as Fedor Emelianenko (39-6, one no-contest) battles Tim Johnson (15-7) in heavyweight action. All you need to say is Fedor and you know what to expect. Don't blink.

facebook twitter whatsapp
Sowma def. Minakov via TKO due to an injury at 3:08 of the third round.

A disappointing way to end an entertaining affair. Minakov and Sowma were exchanging when Minakov backed off shaking his hand as he broke a finger on his left hand. Minakov quickly snapped the finger back in place but it was too late because the referee had already waved it off.

It was a close fight up to that point. Minakov won the first and Sowma won the second. The third was close and would have came down to the last two minutes. A disappointing end to a fun contest.

facebook twitter whatsapp
It's time for the co-main event of Bellator 269 as former heavyweight champion Vitaly Minakov (22-1) faces off with Said Sowma (7-2) in heavyweight action.

MInakov returns for the first time in over two years. How will his cardio handle the long layoff?

It didn't take long for Nurmagomedov to get the job done. He quickly took Pietila down to the canvas. From there it was just a matter of time before the fight ended. Nurmagomedov kept looking for the right position to be able to finish Pietila off. He finally saw the opening as he transitioned to the mount position and then slid to Pietila's back.

He let go of the choke for a moment to get a better grip. He instantly regained it and Pietila wasn't escaping and tapped out.

Nurmagomedov is now 14-0 and now wants a ranked opponent next.

facebook twitter whatsapp
Up next at Bellator 269 is Usman Nurmagomedov (13-0) facing Patrik Pietilä (11-8) in a catchweight bout at 160 pounds. Usman is the cousin of former UFC lightweight champion and one of the best to do ever to do it, Khabib, who is in the corner for this one.

Pretty fun fight. A good mix of striking and takedowns from Tokov. But it came down to the ground work of Tokov as that's what secured his 30th career win and sixth inside the Bellator cage.

Kicking off the Bellator 269 main card are Anatoly Tokov (29-2) and Sharaf Davlatmurodov (18-3) in middleweight action.

facebook twitter whatsapp
Welcome to DAZN News' live coverage of Bellator 269. The main event features the return of the legendary Fedor Emelianenko as he squares off with former interim heavyweight title challenger Tim Johnson. It's always a treat to watch Emelianenko compete so grab the refreshments, find a comfy place to sit and enjoy our coverage of what could be a memorable night.