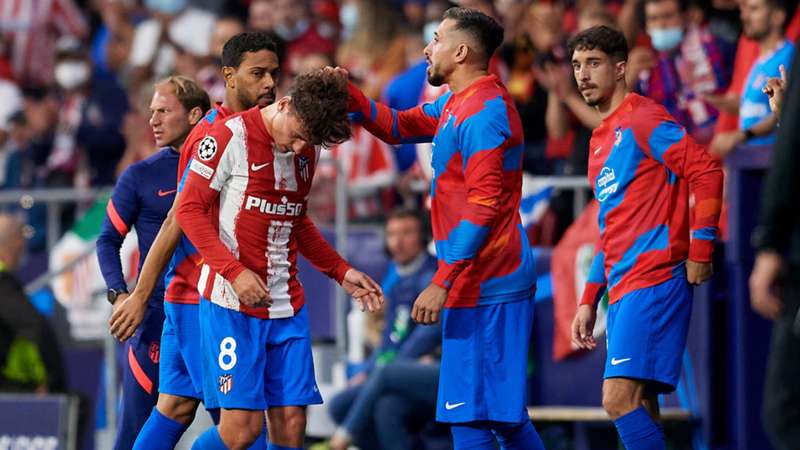 The French international felt the highs and lows of Champions League football within the same match.

The Reds were paced by a pair of Mo Salah goals as well as a fantastic strike by Naby Keita, overcoming two goals from Atletico's Antoine Griezmann. Four of the game's five goals came in the first half, but there was enough drama in the closing 45 minutes to sustain what was ultimately an extraordinary match between Group B rivals.

Salah got the proceedings underway inside the opening 10 minutes, as the Liverpool man embarked on one of his trademark mazy runs at the top of the Atletico penalty area and made his way around three defenders before unleashing a shot goalward. The ball appeared be redirected into the net by James Milner, but the goal was given to Salah.

Either way, the Reds had a 1-0 lead just eight minutes into the contest.

The visitors would then double their advantage five minutes later, as Keita latched on to a poor clearance and smashed a curling volley past a helpless Jan Oblak.

Down two goals early, the hosts didn't allow themselves to sulk as they pushed for a way back into the match. They were rewarded in the 20th minute as Griezmann managed to get his foot on a Koke shot and redirected the ball into the Liverpool net from in close. The finish was similar to the opener in that it was helped on by a lurking attacker after a long-range effort from a teammate, although this one was credited to Griezmann.

The 30-year-old would double his tally in the 34th minute, this time leaving no doubt as to who was the man responsible for the finish. After receiving a pass from Joao Felix 20 yards from goal, Griezmann used an intentionally heavy touch to get around his defender and slid the ball underneath a diving Alisson for the equalizer.

Coming out of the halftime break with the momentum, Griezmann and Atletico seemed primed to finally grab the lead for the first time in the match. However, the striker went from hero to goat in the 52nd minute as he was shown a red card for a high foot while trying to gain possession of the ball. Griezmann struck Roberto Firmino in the head with his foot, giving the referee no choice but to give the two-goal attacker his marching orders.

The red card was a turning point in the match and things went from bad to worse for the Rojiblancos in the 76th minute as Atletico defender Mario Hermoso foolishly bodychecked Diogo Jota inside the penalty area, giving the visitors a chance to regain the lead from the spot. To no one's surprise, it was Salah who stepped up to take the ensuing kick, and the in-form Liverpool star easily sent the goalkeeper the wrong way with his effort.

A huge moment for Liverpool 🔝 pic.twitter.com/cVNLbjOYl9

Atletico thought they had earned a penalty of their own just minutes later, with Jota the apparent offender in the Liverpool area. However, a VAR check determined that Jota's clumsy challenge on José María Giménez was not enough to warrant a penalty for the home side, leaving the Atletico players and fans furious.

Unfortunately for the Spanish side, the non-penalty in the 84th minute was as close as they would get to pulling level for a second time, as Liverpool were able to see out the match and claim a massive three points.