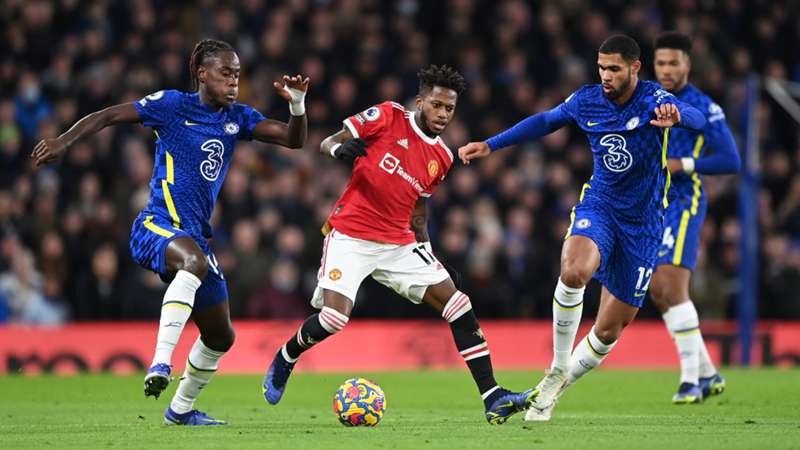 The league-leading Blues couldn't put away a stubborn Red Devils side.

Chelsea and Manchester United entered Sunday 12 points apart on the Premier League table, and after a 1-1 draw the gap between the teams remains the same.

As the league leaders, the Blues were favoured against their visitors. United started the match in ninth place and have been in a state of flux following Ole Gunnar Solskjaer's dismissal earlier this month.

Yet despite the disparity in form between the sides, it was United who forced the issue by scoring the game's opening goal. Jadon Sancho put the Red Devils ahead with a calm finish in the 50th minute, after Chelsea's Jorginho committed a grave error that sent Sancho and Marcus Rashford in alone on goal. Using Rashford as a decoy, Sancho waited until Edouard Mendy made a move before easily slotting past the helpless Chelsea goalkeeper.

United, who had held the hosts off the scoresheet despite overwhelming pressure throughout the first half, weren't able to keep Chelsea from getting their goal. When Aaron Wan-Bissaka brought Thiago Silva down inside the penalty area in the 67th minute, it gave Chelsea the opening they needed to find the equalizer. Jorginho stepped up to the spot for the Blues, and with a slight skip in his run-up he froze United 'keeper David de Gea and struck the ball inside the left post.

The levelling goal buoyed the home side, who proceeded to once again take control of the match. However, despite a 66-34 possession advantage and having outshot United 24-3, Chelsea couldn't find a winner and the teams split the points.

The result sees United climb into eighth place, while Chelsea remain in first but now have just a one point lead over secind-place Manchester City.