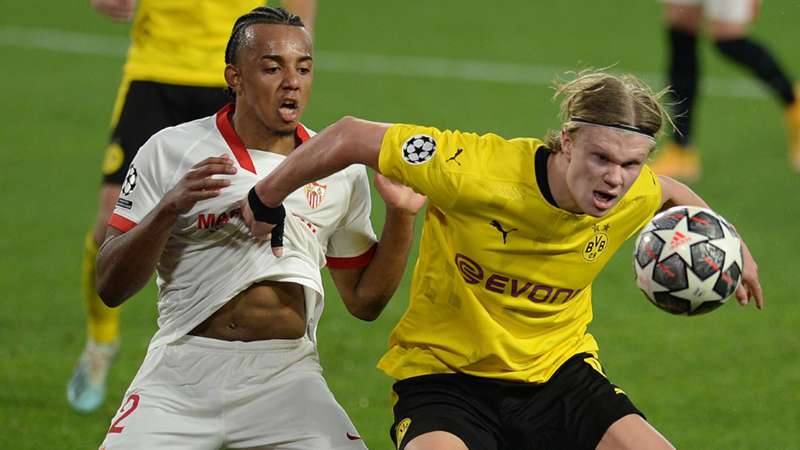 The young striker scored twice in the first half of Wednesday's match.

A pair of goals from 20-year-old phenom Erling Haaland helped Borussia Dortmund claim a 3-2 first-leg round of 16 victory at Sevilla in the Champions League on Wednesday.

The Andalusian club grabbed an early lead thanks to a seventh-minute strike from Suso, but Dortmund stormed back and scored all three of their goals inside the first half. Midfielder Mahmoud Dahoud got the German side back on level terms in the 19th minute before Haaland struck twice in a 16-minute span to secure the victory.

In the 27th minute, Haaland combined well with teammate Jadon Sancho to unsettle the Sevilla defence before outracing goalkeeper Yassine Bounou and tapping the ball in for the go-ahead goal. Sixteen minutes later Haaland finished off a Dortmund counterattack to give the Black and Yellow what was ultimately an insurmountable advantage.

The goals were Haaland's ninth and 10th in the Champions League, continuing the torrid pace the youngster has set for himself.

Sevilla did manage to cut the lead to one goal after Luuk de Jong struck six minutes before the final whistle, but it wasn't enough as Dortmund left the Estadio Ramon Sanchez-Pizjuan with three away goals ahead of the March 9 second leg in Germany.