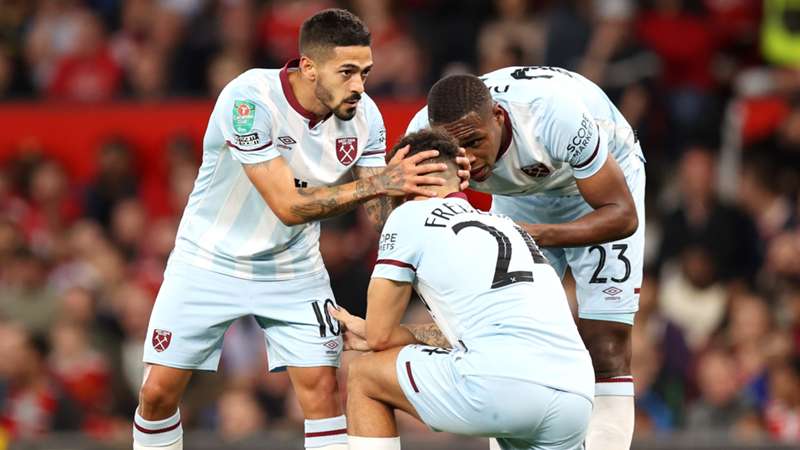 The teams have become familiar foes with two matches in three days.

West Ham United exacted a bit of revenge on Manchester United on Wednesday as the Hammers claimed a 1-0 third-round Carabao Cup victory at Old Trafford.

The teams met just three days earlier in London, where the Red Devils fought back from an early deficit for a 2-1 Premier League win. In Wednesday's cup match, both sides featured heavily-rotated squads with many notable absences from three days earlier, but the atmosphere was still one reflective of a pair of teams that had just battled recently.

The Hammers broke through within the opening 10 minutes as full back Ryan Fredricks burst into the United penalty area from the right wing and drove toward the byline before cutting back a perfectly weighted pass that a wide-open Manuel Lanzini easily struck into the net. It was exactly what West Ham deserved after visitors started off the better of the two sides.

It didn't come without a cost, however — Fredricks pulled up after making the pass with an apparent leg injury and, though he tried to continue on, was substituted in the 17th minute.

Either way, the early Lanzini goal ended up being the only time either side found the back of the net. That wasn't for lack of trying, especially by the hosts, as United took 27 shots compared to West Ham's nine (6-3 in shots on goal). The Red Devils had control of play for most of the match, finishing with a 61-39 possession advantage as the Hammers eventually fell back into a defensive shell in order to protect the lead.

Despite the one-sided numbers, it was actually West Ham that had the better of the chances in the second half, including two glorious opportunities to double the lead in the dying moments as the home side pushed forward in search of an equalizer.

Ultimately the clock was the biggest factor as United simply ran out of time to find a goal, and West Ham left Old Trafford with a well-earned victory.

Just listen to that away end!! ❤️

We win at Old Trafford! Through to the Fourth Round we go! ✊⚒#MUNWHU pic.twitter.com/zl2iQFo3pH