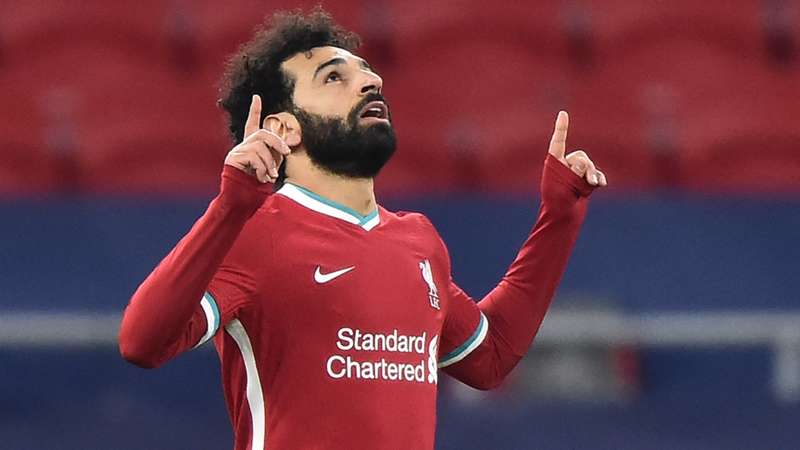 Mo Salah led the way with a hat trick.

It was billed as a heavyweight clash between two longtime rivals, but only one team showed its pedigree as a top-class Premier League side as Liverpool routed Manchester United 5-0 at Old Trafford on Sunday.

Mo Salah led the way for the Reds with a hat trick, while Naby Keita and Diogo Jota also found the mark for the rampant visitors.

The match was effectively over within the opening quarter-hour as Liverpool struck twice inside that time frame and continued to pile on the goals. Liverpool had a 4-0 halftime lead and cruised through the second half with the knowledge that the victory was well in hand, although Keita's early exit following a hard challenge by Paul Pogba — who was ejected for the tackle — will be of concern for manager Jurgen Klopp going forward.

Liverpool climbs into second place with the victory, while the loss keeps United in seventh.

DAZN News provided live commentary and analysis of Sunday's match as it happened. Here's how it all went down.

81' The match has slowed

facebook twitter whatsapp
Lots of noise coming from the visiting supporters' end at Old Trafford, but on the pitch the players are resigned to this result.

facebook twitter whatsapp
The Liverpool man nearly makes it six as his shot seems destined for the top corner, but de Gea goes full stretch to tip it over.

The LIverpool man is taken off the field in a stretcher following that Pogba tackle. He's replaced by Oxlade-Chamberlain.

Meanwhile, United made a pair of substitutions, as Cavani and Dalot enter for Fernandes and Rashford.

facebook twitter whatsapp
The ref consults the monitor and watches the tackle. He then brandishes a red for Pogba, and United's nightmare gets worse.

It gets EVEN WORSE for Man United

The midfielder slides in to win a loose ball but goes right through Keita.

facebook twitter whatsapp
The United defender sees yellow for taking down at player at the top of the 18-yard box.

52' Ronaldo scores for United... but it's offside

facebook twitter whatsapp
United finally seem to get on the board after a good bit of work from Ronaldo, but he's shown to be a step off in the subsequent VAR check.

facebook twitter whatsapp
Manchester United 0-5 Liverpool
It's a hat trick for Salah! Pogba turns the ball over in the centre circle, and Hernderson hits a sublime ball downfield for Salah to run onto. He charges into the area and chips it over de Gea.

Pogba enters the match for the beleaguered home side. Greenwood's out.

Fernandes gets a yellow less than 30 seconds in for a hard challenge.

facebook twitter whatsapp
Manchester United 0-4 Liverpool
Maguire overcommits on a tackle and the ball finds its way to a wide-open Salah, who strikes the first-time effort past a stunned de Gea.

The superstar takes down Jones in a battle for the ball, and kicks the ball under the prone player that brings everyone over to the corner. The yellow card stands after a VAR check determines that the kick struck the ball and not the player.

Ronaldo sees yellow for this 😬 pic.twitter.com/pIevveraIc

facebook twitter whatsapp
Manchester United 0-3 Liverpool
Salah shoots from the top of the penalty area but the ball is blocked. It rolls fortuitously to Keita on the right-hand side, who has all the time he needs to send in a hard cross back into the goalmouth that Salah hits first time for Liverpool's third of the day.

LIVERPOOL ARE ON FIRE 🔥 pic.twitter.com/xjbvLUtTJH

facebook twitter whatsapp
A poor back pass by Rashford spring Salah down the right side. He charges into the penalty area from near the byline, giving him almost no angle to shoot at. Still, he hits a point-blank effort that de Gea does well to block.

facebook twitter whatsapp
The United full back strikers a low shot hard, and it breezes inches past the far post. The attempt comes off a better spell of play for the hosts, but Liverpool 'keeper Alisson has still yet to be properly tested.

facebook twitter whatsapp
Manchester United 0-2 Liverpool
The visitors double their lead after United get all mixed up at the back. That leaves two Liverpool players wide open at the back post, including Jota, who slides in to knock the ball into the open net.

Mistake at the back and Liverpool make it TWO 😲 pic.twitter.com/BlgszGlLxb

facebook twitter whatsapp
Liverpool keeps pushing forward, the time with Firmino getting a good shot off that stings the palms of the United goalkeeper.

And just like that, Liverpool charge down the field and score the opener. A frantic counterattack cuts open the United defence, and eventually Keita is put through alone on goal. He easily slips it past De Gea.

Fernandes will be rueing his big miss even more, now.