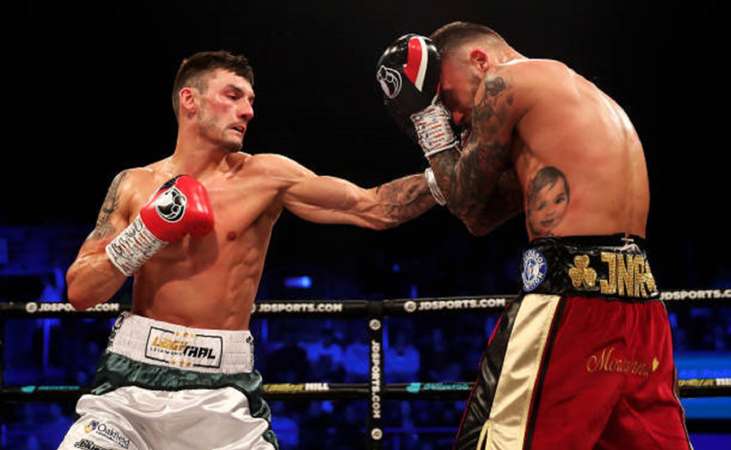 Watch Fight Camp only on DAZN

From a star amateur to world champion, Wood saw his fellow Nottingham man do it all. From celebrating wildly during destructive wins over the likes of Lucien Bute and George Groves to enduring the heartbreak of defeats against Andre Ward and Mikkel Kessler, Wood felt every emotion on the “Cobra’s” unforgettable journey.

Next week, live on DAZN at Matchroom HQ, Wood has his own chance to savour the world title glory enjoyed by his hero. Against China’s Can Xu, Wood has the chance to rule the world as the second instalment of Fight Camp launches with an intriguing fight for the WBA featherweight crown.

For Wood, this is an unlikely chance as just over a year ago his hopes of competing at a higher level were snatched by Liverpool’s Jazza Dickens in a thrilling Golden Contract semi-final. Dickens went on to win the tournament and has his own world title opportunity against Kid Galahad, which main events week two of Fight Camp, but it’s Wood who competes for the top prize first.

“It’s not a fight I was expecting but it’s one I’m ready for,” said Wood when speaking exclusively to DAZN. “Although the fight was only announced a few days ago, I’ve been ready for about six weeks and I know that’s enough time to get me to where I want to be to take on a fighter like Can Xu.

“He’s a fighter who carries himself well but there’s plenty of opportunities to exploit him and that’s what I’ve been working on with Ben [Davison]. Ben’s one of the best trainers in the country and the work that we’ve done together preparing for this fight is going to give me the best possible chance to become world champion.”

A professional since 2011, Wood’s passage to his showdown with Xu has been a long and frustrating one. Touted as one of British boxing’s brightest prospects when returning his amateur vest, Wood’s early progress was drastically derailed when he was worn down and stopped by Gavin McDonnell in 2014.

A slow recovery ensued where spells of inactivity made Wood an afterthought to the country’s leading featherweights but with Dave Coldwell taking over his management in 2019, opportunities came Wood’s way. Wins over Ryan Doyle and David Oliver Joyce reignited Wood’s career, and his loss to Dickens also served as a career enhancer due to the nature of the fight.

After disposing of Reece Mould in February this year, Mould believes he has proven himself at all levels apart from the highest. With the Xu fight fast approaching, Wood insists that the potential always possessed by him is going to be realised after ten hard years and he wouldn’t change a single thing about the voyage that brought him to this defining moment.

“It’d be boring as f— if there wasn’t a few bumps along the way,” says Wood when asked about the roadblocks in his career. “I never stopped believing that I would be world champion one day and now I’m one fight away from achieving it.

“The losses to McDonnell and Dickens hurt but I’ve refused to give up and here I am now. It’s so hard not to look ahead because I’ve dreamed about the biggest fights on the biggest stages but for now it’s all on Can Xu. If I can become Nottingham’s second world champion after a legend like Carl Froch then that’s some pretty good company to be amongst. I’ll take that.”