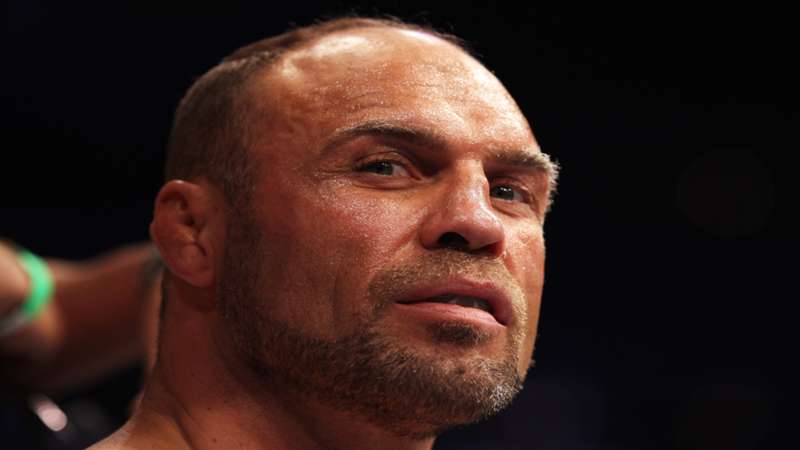 The MMA legend discusses a litany of topics with DAZN News.

Randy Couture had one of the greatest careers in mixed martial arts history.

Couture is a former UFC heavyweight and light heavyweight champion. He's faced some of MMA's biggest names like Chuck Liddell, Tito Ortiz, Vitor Belfort, Brock Lesnar and Lyoto Machida. "The Natural" retired in 2011 and has gone on into acting, appearing in movies such as The Expendables franchise.

Currently, Couture is a commentator for the PFL. The company returns for their upcoming season on Friday with Anthony Pettis taking on Clay Collard in the main event.

Before the season kicks off, Couture previews the PFL season with DAZN News, the potential for Claressa Shields, the controversy surrounding Gina Carrano and his documentary that was recently released.

DAZN: I recently received a press release about your documentary, "The Randy Couture Story". I'm thinking, 'Why in the heck is this not penciled in sooner just considering what you've done for the sport?' Why do you feel like it's taken so long for your story to be told?

Randy Couture: I have no idea. I wrote an autobiography, which had been 15 years ago. That told some of my journey, some of my life experiences that ultimately led me into MMA and all of that. I think maybe some of it has been subdued or suppressed by the powers that be at Zuffa (then parent company of the UFC) or whoever was in charge. I was one of those guys that went against the grain in some ways, which is why I'm persona non-grata with those guys now. I was following my heart, doing my best to protect my interests and my passion, and my family. I think the PFL because they took 2020 off, which I agree with their decision to do that, and they spent a lot of time and energy building a very specific format. So to halfway do it, (and) do shows to stay in the marketplace didn't make a lot of sense, and I agree with their decision to do what they did. Now obviously, excited to be coming back online here on the 23rd of April.

DAZN: When you're not acting, you're commentating for the PFL. Many people liked the route they chose in terms of free agents in 2021 and here in 2021, signing people like Anthony Pettis, Fabricio Werdum, and Rory MacDonald. What do you make of some of the bigger acquisitions that PFL made in the last 12 months?

RC: I think it's a natural progression. You start giving guys a chance to win a million dollars, fight five times, know exactly when they're going to fight, and a crack at a million dollars. That's going to attract a lot of people in this sport that many of them would take years and years and years to get into the six-figure type contracts with some of the other promotions. I'm not surprised that we're attracting some of the top names in the sport. Clarissa Shields is going to be very exciting and see how she accommodates and becomes a mixed martial artist and not just a boxer. And I'm not saying just a boxer, we're talking about a two-time gold medalist. I mean, for crying out loud, it's amazing. But (she's) headed towards that classic matchup (with) that judoka that's a two-time gold medalist and a boxer that's a two-time gold medalist. It's going to be a pretty cool matchup when that eventually happens. I'm not surprised. We signed a lot of the best free agents in the sport and upped our game. I think there's a regularity about knowing exactly when you're going to fight again and not have to sit out and wait. There's so many fighters in so many fights. There's probably two shows almost every weekend. So it's a different animal.

DAZN: You talked about Clarissa Shields, and you brought up her possible matchup with her and Kayla Harrison. Everyone seems to forget you started this little train of facing boxers and that memorable performance in Boston against James Toney. What advice would you give Clarissa Shields right now?

RC: Spend all of her time grappling, all of her time on the mat, figuring out these grappling situations, and grappling and wrestling scenarios. If she can develop some strong skills there and skillsets there, especially in the defensive realm of grappling, then she can keep fighters where she wants them, which is on their feet standing in front of her. That's going to be the task. She's coming at it from the opposite side of the spectrum I came from. I wanted to make everybody wrestle me. That meant I had to strike with them long enough and be proficient enough striker to number one, protect myself and number two, be able to close the distance to get my hands on them. She's the exact opposite of that side of that coin. She needs to learn to grapple proficiently, keep people from taking her down, be able to scramble back up to her feet, and be hard to hold on the ground so that she can make people stand toe to toe with her stand right out in front of her where her background suits her best.

DAZN: What do you think her chances are in mixed martial arts?

DAZN: You've been close to her in the past and just wanted to ask what do you make of everything surrounding Gina Carano these days as she's getting bombarded from every side of the block with what happened with the Mandalorian and a couple of other things she had been doing?

RC: I think Gina is an amazing person. I was part of her journey and trained with her and helped prepare her for a couple of her big fights in her MMA career (as) she trained at Extreme Couture. I know her very well. I think she's an amazing person. I think what you're seeing is a function of what's going on in our society right now. It's not a function of Gina Carano. She is the sweetest person, the most genuine person you're ever going to meet. I think what's going on is a function of a part of our society right now that is finding ways to be offended, finding ways to cancel things rather than address them and have a rational conversation about them. They just want to cancel them, and people have given it the term canceled culture.I don't want to get into politics. Maybe that's part of the problem with Gina. She's got strong opinions. She's a strong female. She stated some of her strong opinions, and there's part of our culture that didn't agree or didn't like it. Rather than have a rational conversation, and discuss the issues, they just rather cut it off, cancel it.

DAZN: What do you make of MMA right now as a whole in 2021 because it seems like MMA is more popular now than it's ever been. Is that right, wrong, or indifferent?

RC: I definitely think we are as popular as we've ever been globally. It's become a global combative sport for this generation, which I think used to be boxing. We've seen that kind of transition over the years coming. I think in some ways, the markets a little saturated. There's one or two, sometimes three fights almost every weekend. I think something about the era that I was in, the pay-per-views, and there were six, maybe eight a year. There was something special about those matchups, special about those guys. It's become a little more commonplace. We just expect it now. Some of the shine maybe has worn off a little bit. I think that's opened the door for promotions like the PFL with a unique format and a unique approach to the sport that has attracted a lot of fans. I think that's going to continue to be the case. I think we're going through some growing pains because of the saturation in the market, the number of promotions out there and, and all of that on a global scale. It's a great time to be a fighter. You can't get it one way; get it in one place. You can go somewhere else and do a great job and make a great living.

DAZN: What can fans expect from the new season of the PFL starting on April 23?

RC: Aside from some pretty stellar names that we were able to sign in the free agency, I just think that they're going to see guys, go out there, compete, let it hang out, try and score those criteria points to make it to the postseason. This format is a meritocracy. It's not about running your head, talking smack. It's about going out and winning fights. I think that the no-nonsense kind of business aspect of the sport and the PFL is what people really like. That's what I like.