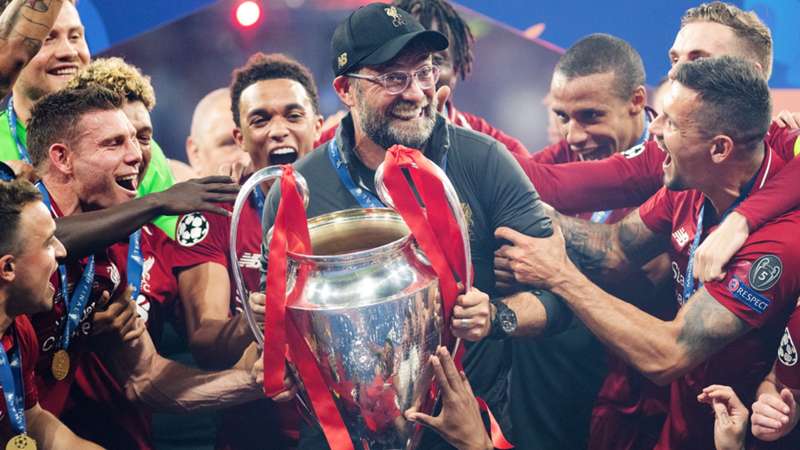 Liverpool manager Jurgen Klopp will be on the side-lines for his fifth European final on Saturday.

Jurgen Klopp is one of football's great managers, and while his Liverpool team missed out on the Premier League last weekend, he will be looking to end the season on a high on Saturday.

The Reds take on Real Madrid for European club football's biggest prize in a rematch of 2018's UEFA Champions League final, and if Liverpool come out on top, that will be the third trophy the team have won this season.

Ahead of Saturday's showpiece event in Paris, DAZN takes a look at the German coach's record in European finals.

After transforming a Dortmund side which had enjoyed plenty of success at domestic level, it was time for Klopp to try and guide his team to a first European trophy since the 1996-97 season.

However, the team which stood in his way was Bayern Munich which fuelled the rivalry between the two German giants.

Bayern took the lead through Mario Mandzukic in the 60th minute amongst the backdrop of an electric atmosphere at Wembley Stadium, but Dortmund found themselves on level terms just eight minutes later after Ilkay Gundogan scored from the penalty spot.

With the game heading towards extra time, Dortmund fans hearts were broken when Arjen Robben scored an 89th winner for Bayern and secured a fifth European Cup for the Bavarian outfit.

When Klopp arrived at Anfield in October 2015, it was clear that the German would be overseeing a rebuild during his first few seasons, but that didn't stop his team from reaching the final of the UEFA Europa League where they came up against serial winners Sevilla.

Despite taking the lead in the first half through Daniel Sturridge, Sevilla found themselves on level terms one minute into the second half through Kevin Gameiro, before two goals from Coke saw the Spanish side win a third straight Europa League title.

It was a dissapointing result and performance from Liverpool, but this cup run gave the fans a preview of what Klopp could achieve with Liverpool as long as he had the right personnel and tactics.

This European final loss for Klopp's Liverpool was probably the hardest to take.

First came the forced substitution of Mohamed Salah who injured his shoulder as a result of a dangerous challenger from Sergio Ramos in the first half. The Egyptian was forced off the pitch and it's an incident which fans still feel bitter about to this day.

Substitute goalkeeper Loris Karious played a huge role in the result for all the wrong reasons in Kyiv. His lapse in concentration was seized upon by Karim Benzema who put Los Blancos into the lead in the 51st minute, but the Reds were back on level terms four minutes later thanks to Sadio Mane.

Then came a moment of magic from Gareth Bale who scored the goal of the competition with an overhead kick to put Madrid 2-1 up. The Welshman wasn't finished and scored brace to make sure the game ended 3-1, but once again it was a chance Karius could have easily saved.

After an injury to a star player and a poor goalkeeping performance, some would be right to think that Liverpool would struggle to bounce back and continue striving for success, but luckily redemption came in the same game the following season.

Klopp guided Liverpool to a second consecutive final and this time he was not going to have his players once again experience heartbreak on the European stage.

Luckily the game against English rivals Tottenham Hotspur was a routine performance from the Reds.

An early penalty was slotted away by Mohamed Salah who completed the perfect redemption arc after failing to make an impact in the previous season's final. This settled the nerves of many fans inside Madrid's Wanda Metropolitano stadium and Liverpool remained in control for the rest of the game.

Super-sub Divock Origi decided to get in on the act with a second goal for Liverpool in the 87th which cued delirium in the stands and secured a sixth European Cup for Liverpool.

As well as being the perfect redemption after dissapointing game in Kiev, this first piece of silverware under Klopp was a spark for Liverpool who the following season won their first ever Premier League title by a huge 18-point margin.