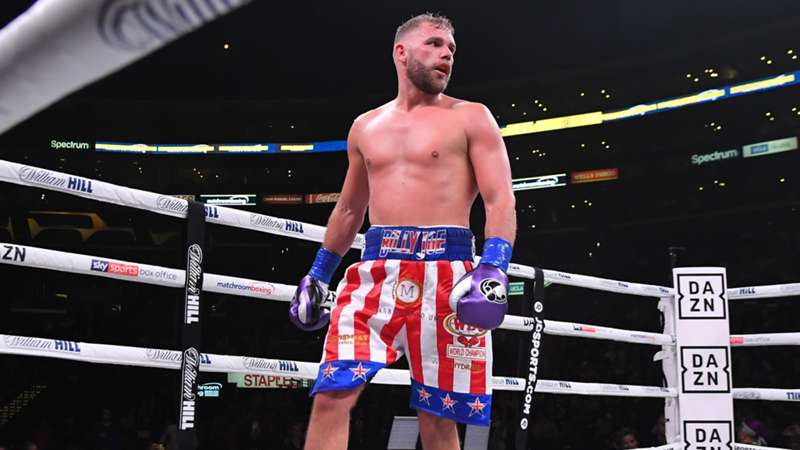 The former world champion is looking for a fight in 2022.

Billy Joe Saunders claimed he would beat Chris Eubank Jr. even if he was ‘half-dead’ at 168lbs.

Saunders is a super middleweight fighter and lost his WBO belt to Saul ‘Canelo’ Alvarez in his last fight, back in May 2021.

It had been suggested he would choose to retire after the defeat but after a stretch away from the limelight, during which he had to recover from a fractured eye socket administered by the Mexican undisputed champion.

Eubank is looking for another high-profile fight after beating Liam Williams at the weekend in Cardiff, and while it was a clear victory for the judges to decide, Saunders was less than impressed.

“He didn’t have a good night,”  said Saunders to IFL TV about Williams. “When Eubank Jr. can outbox something, that’s when you know you’ve had a bad night.

“His [Eubank Jr] boxing ability is like a baby giraffe that just came out. It was terrible. To try and imitate the type of the great Roy Jones Jr, it’s not even boxing. I’ve seen Liam spar better than that. I’m not making excuses.

“You can’t say it was a good performance because if you listen to the commentary, without the knockdowns, they had it close. It wasn’t a Muhammad Ali or Roy Jones Jr. type of fight.”

Saunders wondered if Eubank had left it too late to step up to be a world champion.

“A 32-year-old, who ain’t been a world champion, still not a world champion at 32, does he plan on boxing until he’s 42?” he asked. “I can’t give him much credit because I haven’t seen him in there with anybody to give him credit.

“Let him fight somebody that’s a good credible opponent and let’s see what happens. I’ve seen him at this level for many years.  I boxed for British, Commonwealth, and European.

One potential opponent is Conor Benn, who posted to social media that he believed he would win at a catchweight.

“If they had a catchweight and Eubank had to come down, then I fancy Conor Benn in the fight,” agreed Saunders, who also thinks he could get back in shape to defeat Eubank.

“So that wouldn’t be the issue. He hasn’t got what it takes to beat me. He’ll box when I’m ready. He hasn’t really done anything in the game apart from his dad’s name where you can let someone call the shots.

“Anybody with any brain knows it’ll be Saunders-Eubank.”