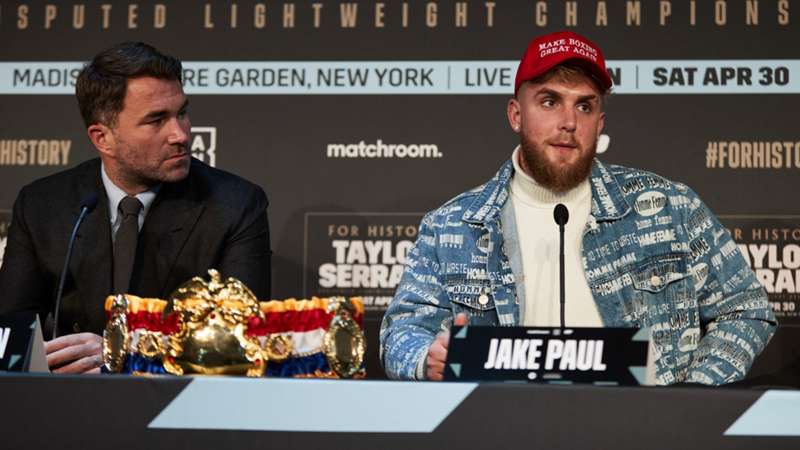 The Matchroom promoter was speaking to The DAZN Boxing Show.

Eddie Hearn is not worried about whether he and Jake Paul like each other, and prefers to focus on their ‘iconic event’ when Katie Taylor meets Amanda Serrano.

The Irish champion and Puerto Rican fighter are due to meet at the end of April at New York’s Madison Square Garden in what is credibly labelled as the biggest fight in women’s boxing history, and it can be seen exclusively live across the world on DAZN.

Speaking on the DAZN Boxing Show, Hearn was happy to talk up the event and said he and Paul were simply focused on putting on a spectacular event.

“I did promote his professional debut, so a lot of this mess is my fault,” he joked.

“Seriously, his intentions whether they’re personal, whether they’re on behalf of Amanda, or on behalf of boxing, are to make this fight as big as possible. So I think whether I like him or he likes me, we don’t really care. We’re both driven to create an iconic event.

“That can only be great for the fighters, for the event itself. When you look at his platform and his following, and ours, and the Garden’s, it’s a huge event. He’s a huge asset.”

Hearn explained that he hoped to make the fight a success after paying tribute to Taylor’s determination, recalling how he came to meet the champion.

“This is a bit more personal for me because in  2013 Katie Taylor DM’d me and asked if she could change the face of professional female boxing, and I didn’t feel as if female boxing had as much of a future back then. I didn’t feel there was the demand from the broadcasters, or the fans were calling for it.

"Taylor, I just witnessed her win gold at the Olympics, so she’s a hero.

"I took the meeting out of respect and what I was greeted by was someone so driven, who canvassed for the IOC to prove to them [women’s boxing] was worthy.

“Her passion for the sport lit a flame inside me and so I wanted to do it. When we started, everyone was against it. As they watched her, they realised she was more entertaining than male fighters and others emerged.

"We always dreamed this moment would come. This is the culmination of hard work of Katie, and all the other female fighters out there chasing their dreams.

"We hope this one day becomes the norm.”