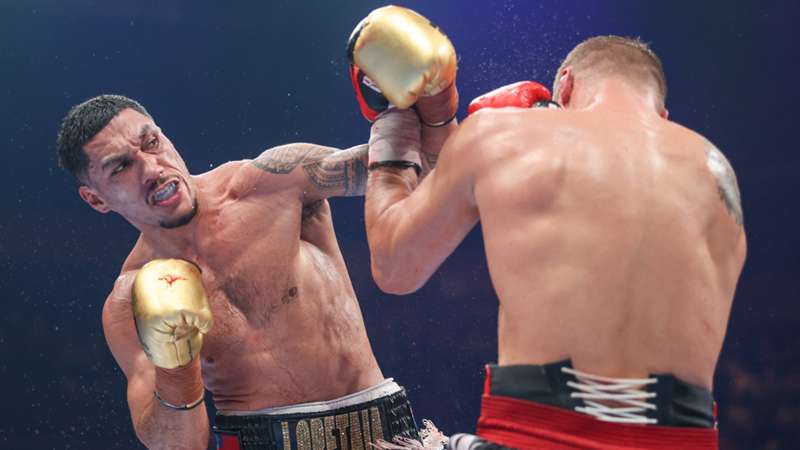 Peter Wallis/Getty Images
Check for Canelo vs. GGG 3 on DAZN in your country

Jai Opetaia is now a world champion after producing the best performance of his career so far.

Jai Opetaia is the new IBF cruiserweight champion after beating Mairis Briedis on points at the Gold Coast Convention Centre in Australia.

There was no doubt that this fight was the biggest of Opetaia's career, but there were no signs of the occasion affecting the 27-year-old.

Briedis managed to land his right hand often in the first round but was dealt an early blow when a cut developed over his right eye. The Latvian continued to utilise the right hand in the second forcing Opetaia to clinch, but the Australian gained confidence in the latter stages before being hit with an uppercut which broke his jaw.

Despite suffering an injury which could cause fighters to be cautious, Opetaia instead went toe-for-toe with Briedis and landed the more clinical, damaging punches.

Those blows were taken their toll on Breidis who had blood pouring from his nose at the end of the fourth and was on the wrong end of brutal body shot in the sixth.

During the second half of the fight, it was clear Opetaia was beginning to slow down, but while Briedis looked to increase the pressure, the Australian challenger used his movement to lessen the impact from Briedis' shots. However, Opetaia still had to be wary of the danger Briedis possessed after being rocked by another right hand in the ninth.

It was clear in the final two rounds Briedis had to empty his reserves, but Opetaia had managed to find the movement which kept in him control of the fight and keep the Latvian at bay who had the Opertaia pinned against the ropes in the closing stages of round 12, but there was not enough time for Briedis to force a late stoppage.

Following the final bell, the judges' scorecards confirmed Opetaia's victory with two scoring the fight 116-112 in the Australian's favour while the third judge scored the fight 115-113.

Now he's IBF cruiserweight champion Opetaia will have a target on his back with the likes of WBO champion Lawrence Okolie looking to secure a unfication fight or two before his inevitable move up to heavyweight.