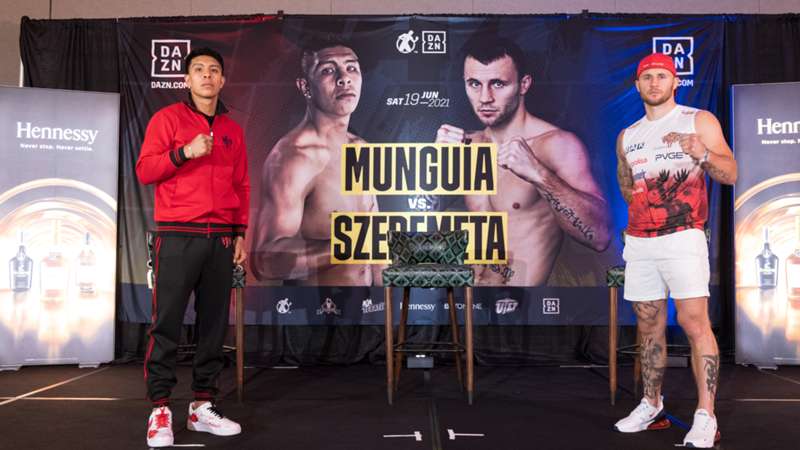 Munguia heads into this one the overwhelming favourite.

(All odds via Betfair)

Betfair (as of Friday, June 18) has Munguia installed as the massive favourite — his three-way odds to win (Munguia win/Szeremeta win/draw) are at 1/40, meaning you'd need to bet £400 to win £10 plus get that large stake back. Meanwhile, Szeremeta is offered at 12/1, meaning if you pluck down £100, you will win £1200 plus stake return.

Munguia (36-0, 29 KOs) returns to the ring after a number of reschedules for the first time since Oct. 30 when he forced Tureano Johnson to retire after six rounds.

Szeremeta (21-1, 5 KOs) was last in action back in December when he suffered his maiden professional defeat to all-time middleweight great Gennadiy Golovkin with 'Triple G' putting his IBF and IBO titles at stake.

Despite only losing the once in his last outing, Szeremeta has been widely touted by experts as having a 'ceiling' between himself and the elite talents at 160lbs. Munguia is highly rated, and many hope to see him face off with Golovkin himself before the Kazakhstani legend hangs up the gloves some time down the road, hence the odds showing a consensus anticipation of one-way traffic.

With that in mind, the true value in this fight comes from trying to predict when Munguia finishes off Szeremeta, not if. You could give yourself decent odds on a Munguia KO if you put money on three or four different rounds with rounds three through seven, all offering between 9/1 and 10/1.

Szeremeta lasted seven against the powerful Golovkin, and Munguia's own finishes have ticked up a little later inside the scheduled distance in recent bouts as he moved from light-middle (where he has been world champion) to middle (where he is now moving up the rankings). It isn't inconceivable that the Mexican will need a similar amount of time to break down the Pole, who will be game even if outmatched as predicted.

Munguia via KO outright offers better value than Munguia in the three-way betting, of course, but at 3/10, you may find more of a challenge (and a much better yield) in picking a round or hedging with two or three different round picks.

Check out Betfair for more details on round betting and all the other markets on offer.