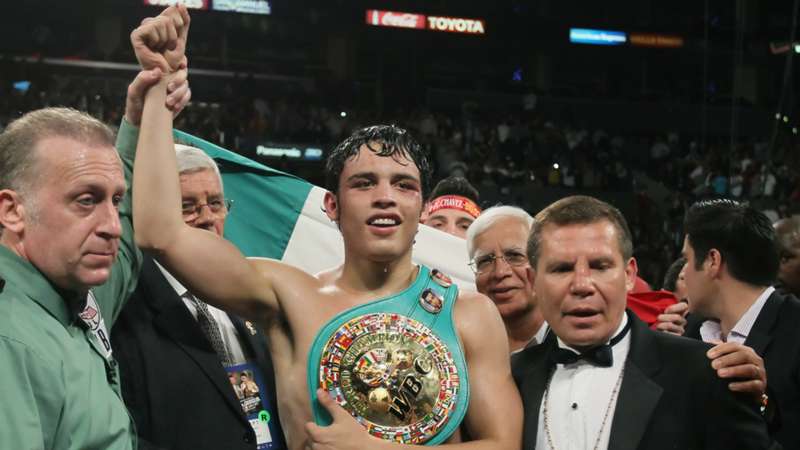 Julio César Chávez Jr. returns to the ring on Friday night. But if it was up to his father, it would have been against somebody else.

Julio César Chávez Jr. returns to the ring for the first time since his controversial loss to Daniel Jacobs in December on Friday night when he takes on Mario Cázares in the main event from the Grand Hotel in Tijuana, Mexico, live on DAZN USA. He'll compete in his native home country due to the fact that he's currently serving a suspension from the Nevada State Athletic Commission for refusing to take a drug test before the bout with Jacobs.

Cázares is undefeated in 11 fights but has fought no one the caliber of Chávez. But his father, who competes in an exhibition bout against Jorge Arce, feels his son should have taken a softer touch to ensure victory.

"Julio was going to do an exhibition," Julio César Chávez Sr. said to DAZN. "I didn't want him to fight. But you know, kids grow up, and they're difficult. They're complicated. I told him, 'Julio don't take on this fighter. This fighter is tough. This fighter is undefeated. Pick a fighter that can't hit, and that has no chin'. I'm joking, but I did tell him to pick a much easier opponent. But he picked a fighter who is undefeated, who's training harder than ever."

Chávez Jr. started fast against Jacobs, but Jacobs took control in the middle rounds. Chávez lost by TKO when he didn't come out for the sixth round after suffering a broken nose. From what he's seen of his son in training camp, Chávez passionately thinks fans will see a better version of what they saw at the end of 2019.

"We'll see what happens, but I believe in his experience," Chávez said. "I think Julio is going to come out much better. He's going to be inspired. He's going to (be better). He's also going to be feeling the pressure of his father, who'll also be in the ring. He's not going to want to look bad."

While the show is centered around Chávez-Arce, Chávez Jr. is in the headlining position. Why would that be the case considering the legendary stature Chávez has in boxing? To the 58-year-old, the answer is quite simple.

"I'm going to go out first; then Julio is going to come out because even though I was the star," Chavez said, "I don't want Julio to go in there and lose, and they (Arce) hit me with a hard f—ing shot. So I'm fighting first, and then Julio is fighting. That's how it's going to be."