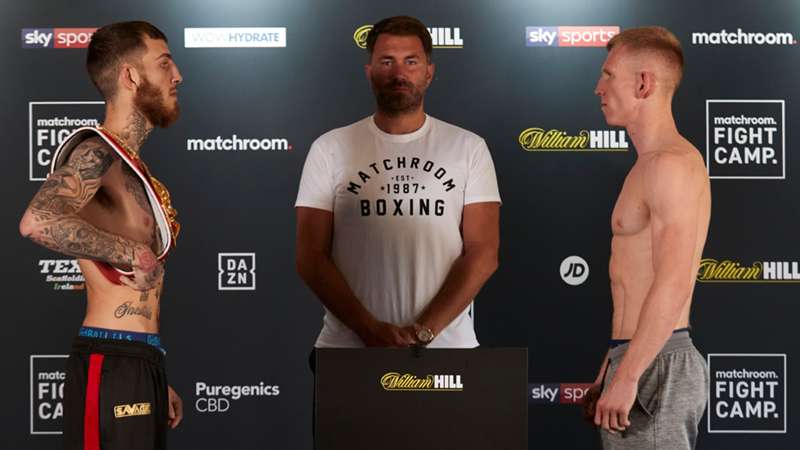 Week 1 of Matchroom Boxing's Fight Camp starts on Saturday from the backyard of company's office in Brentwood, Essex, England. Kicking things off will be a battle of English junior middleweights as Sam Eggington takes on Ted Cheeseman.

This event will be the first for Matchroom Boxing since Feb. 29 because of the COVID-19 global pandemic. No fans will be in attendance, but Matchroom promoter Eddie Hearn promises there will still be quite a show.

"This may be our greatest moment. We talk about (Carl) Froch (vs. George) Groves at Wembley (Stadium), “AJ” (Anthony) Joshua vs. (Wladimir) Klitschko, “AJ” at Madison Square Garden or Saudi Arabia. This may be our defining moment. It is going to be out of this world.

"This is a massive moment for boxing."

Eggington (28-6, 17 KOs) makes his 2020 debut. Since losing to former world champion Liam Smith in March 2019, the 26-year-old has won four consecutive fights with two straight stoppages. His biggest win came in August 2017 when he knocked out Paulie Malignaggi and sent him into retirement.

"You only have to watch Ted fight to know that he doesn't give up when it gets hard," Eggington said. "I have full faith in myself, and if anyone can make him give up, I'll be that guy. It'll be a good fight while it lasts. The way we both fight, it's going to gel for a war, but I genuinely think I've got enough to get the win."

It's a career crossroads bout for Cheeseman as he needs a victory in the worst way. A loss sends him into purgatory while a victory gets him going in the right direction again. For Eggington, emerging victorious puts him in another significant contest his next time out.

Here’s a complete guide to the Eggington vs. Chesseman card.

The Eggington vs. Chesseman fight is available on Sky Sports in the U.K. and DAZN in the U.S., along with many other regions globally.

Eggington vs. Cheeseman on DAZN is available to users in the following markets: United States, Brazil, Germany, Austria, Switzerland, Italy, Spain and Japan. In addition to those countries, select beta testers worldwide are able to watch the fight ahead of the upcoming global roll-out of the service. (Fight Camp bouts will be unavailable on DAZN in Canada.)

Where is the Eggington vs. Cheeseman fight?

The Eggington vs. Cheeseman fight takes place in Eddie Hearn's garden, at the Matchroom Boxing offices in Brentwood, Essex, England. Matchroom set up the venue as a way to hold events during the coronavirus pandemic.