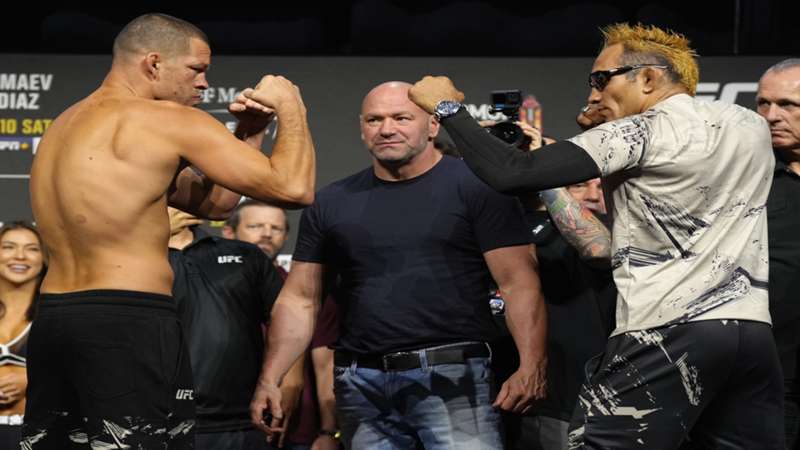 It could be the last time one of MMA's biggest stars competes in the octagon and gets the job done.

The UFC's intention heading into Nate Diaz's final contest at Saturday's UFC 279 was to give him the toughest possible matchup on the way out. That's why the organization made the matchup between him and Khazmat Chimaev.  But those plans came spiraling down when Chimaev missed weight by 7.5 pounds. Immediately, the bout was scrapped because of the weight discrepancy. Scrambling, the UFC made the best fight possible, and it was a great one as Diaz took on former interim lightweight champion Tony Ferguson in the main event from T-Mobile Arena in Las Vegas.

And Diaz didn't disappoint as he fought a Nate Diaz fight which has endeared him to fans worldwide and made him a global superstar. He threw middle fingers, pointed, and laughed at Ferguson when he cracked him with a hard shot. And the native of Stockton, Calif., finished things in style with a submission victory while flexing his muscles at the 2:52 mark of the fourth round. DAZN had it scored 29-28 for Ferguson at the time of the guillotine choke.

Heading into the fourth round, it appeared to be a close fight, but two of the judges had Diaz winning all three rounds while the other judge had the same score as DAZN. Typically, the later rounds are when Diaz shifts things into another gear. The former Ultimate Fighter winner did precisely that.

His combinations were crisper and were taking their effect on Ferguson. Finally, a double left hook sent Ferguson into the cage. Realizing he was in trouble, Ferguson went for a takedown. Diaz saw it coming and closed the show. He quickly snatched Ferguson's neck and locked him in the guillotine choke. He knew the former interim lightweight champion was done as he started flexing muscles, and Ferguson tapped as the arena erupted in jubilation.

What is next for Diaz? Stay in the UFC for a highly anticipated trilogy clash with Conor McGregor? Take a boxing match with Jake Paul if he beats Anderson Silva on Oct. 29?

"I want to get out of the UFC for a minute and show all these UFC fighters to take over and own up another sport," Diaz told Joe Rogan in his post-fight interview. "How you're supposed to do it because Conor McGregor didn't know how to do it."

Here is what happened at UFC 279.
0
NEW BLOG POSTS

Diaz def. Ferguson by submission (guillotine choke) at 2:52 of the fourth round.

Thudding leg kick from Ferguson. A right hand for Diaz. A left sends Ferguson back. A right hand by Diaz forces Ferguson to circle back. A combination from Diaz, which gets the crowd to erupt. A crisp right uppercut by Diaz.

A double left hook sends Ferguson to the cage. Ferguson rushes for a takedown. That was the opening Diaz needed as he locked in the guillotine choke. He flexes while Ferguson taps.

If that's how Diaz goes out, what a way to go out.

facebook twitter whatsapp
Ferguson buckles Diaz's leg with a thudding leg kick, nearly sending Diaz to the canvas. He circles around the cage pretending not to want to fight. Diaz comes with a series of shots. Another right hand by Diaz. Another leg kick buckles Diaz, who is visibly frustrated. A combination by Diaz followed by another combo. A series of leg kicks by Ferguson, which forces Diaz to lay on top of the cage in the final seconds. A weird round. (10-9 Ferguson, 29-28 Ferguson)

facebook twitter whatsapp
Leg kick by Diaz to begin the second. A combination for Ferguson. Another combo by Ferguson. An uppercut by Ferguson. Here comes Diaz with a left hand.

Ferguson with a cut above the right eyelid. Blood going right into Ferguson's eyes. Combination by Diaz, but Ferguson comes back with an elbow. Combination and a big right hand for Diaz. Straight left shakes Ferguson for a moment. Leg kick by Ferguson. A right by Diaz at the horn and then proceeds to talk trash to Ferguson while walking back to his corner. (10-9 Diaz, 19-19)

facebook twitter whatsapp
Diaz and Ferguson come out firing to kick things off. Ferguson, with a push kick, and Diaz falls to the ground. Ferguson doesn't fall for it and lets him back up. Diaz with a kick to the shin. Ferguson's shin is cut open and gushing blood. Left hook by Ferguson. A left by Diaz. Diaz lands a hard left, points, and laughs at Ferguson. Hard right by Diaz, followed by a leg kick. Three-punch combo by Diaz. Stiff leg kick by Ferguson. Another one for "El Cucuy". Another combination by Diaz to end the round.

Diaz came on at the latter half of the round but a slight edge overall to Ferguson. (10-9)

facebook twitter whatsapp
It's time for the main event of UFC 279 as Nate Diaz (21-13) battles Tony Ferguson (26-7) in welterweight action. This has come under the most unique of circumstances.

But we are here. It's showtime.

Chimaev bum-rushed Holland at the jump. He went for takedown after takedown. Holland did his best to fend off the attack, but the pressure was too much for him. Finally, Chimaev locked in the d'arce, but it was only a matter of time and positioning. He found it, and Holland had no choice but to tap out.

A great performance from Chimaev. The fact that Chimaev didn't apologize during his post-fight interview for his massive mistake shows what type of human being he is. I wouldn't be giving him anything of significance until he shows he could be a professional.

facebook twitter whatsapp
It's time for the co-main event of UFC 279 as Khazmat Chimaev (11-0) battles Kevin Holland (23-7, one no-contest) at a catchweight bout of 180 pounds. The hatred is deep between these two.

Daniel Rodrguez gets the surprise decision

A shocking decision. He didn't do much and was more than a standing target, as Jingliang was the aggressor throughout and should have gotten the nod.

A tough loss for Jingliang, as like Rodriguez, took the fight on a little more than 24 hours notice.

facebook twitter whatsapp
Currently, at UFC 279, Lin Jingliang (19-7) faces Daniel Rodriguez (16-2) at a catchweight bout of 180 pounds. Jingliang was set to face Tony Ferguson, and Rodriguez had been set to take on Kevin Holland. With all the switches, now they face one another.

In a back-and-forth match, it came down to the third round as each woman had won a one round apiece. Chiasson was in control and well on her way to a victory. However, Aldana was on her back when she landed a perfect liver, making Chiasson crumble instantly.

A surprising performance from Walker. A big slam from Walker led to him transitioning to Cutelaba's back. He snatched Cutelaba's neck, locked him in the choke, and secured the submission.

Huge win for the Brazilian, who should move into the top ten.

A night of exciting fights is expected, so get the refreshments, find a place to get comfy on the couch, and enjoy our live results, updates, and highlights of UFC 279.