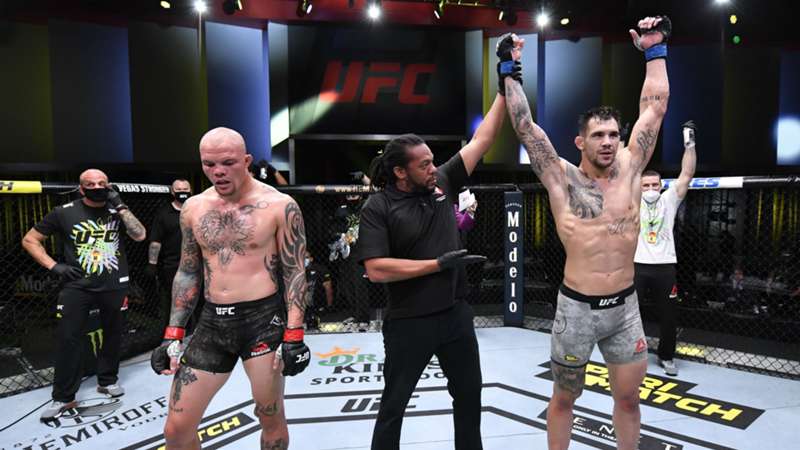 Aleksandr Rakic moves one step to a shot at the light heavyweight championship.

Coming off his first setback in the UFC by a narrow split-decision loss against former title challenger Volkan Oezdemir, Aleksandr Rakic needed a win to keep pace in a wide-open light heavyweight division now that Jon Jones has vacated the 205-pound title

Rakic put the weight class on notice by controlling Anthony Smith from the outset to win a unanimous decision (30-26, 30-27, 30-27) from the UFC Apex in Las Vegas, Nev.

“I’m happy with my performance against a veteran and former title challenger,” Rakic said in his post-fight interview. “Everybody underestimates my wrestling and my grappling. The focus was a lot of pressure, make damage on the ground, (and) control.”

Rakic (13-2) came right out and let Smith know it was going to be a long night at the office by drilling leg kicks. Smith fired back with shots of his own, but around 90 seconds into the fight, the blows to the leg proved to be too much as Rakic buckled the former light heavyweight title challenger's lead leg and sent him to the canvas. Realizing he was in serious trouble, Smith tried for multiple submissions, but Rakic was able to avoid danger.

Rakic started the second like the opening round and continued to make mincemeat of Smith's leg. Smith fought back with a hard right hand, but Rakic took Smith down to the canvas and controlled the action for the entire stanza.

Not much changed in the final round. Rakic began with another vicious leg kick and took Smith down to the mat to secure the victory and put himself into the conversation at 205 pounds. Rakic is likely going to have to wait to see how things shake out as Dominick Reyes and Jan Blachowicz meet for the vacant belt at UFC 253. And with top contenders Thiago Santos and Glover Teixeira facing off on Sept. 12, it's not certain that Rakic will get a title opportunity next. That didn't stop the 28-year-old from calling his shot.

'You know what's next," Rakic said when asked who he wanted for his next fight. "The belt is next. Reyes-Blachowicz, it's me. It's the next one. This is what's next for Aleksandr Rakic.

The co-main event saw Neil Magny earn the biggest win of his career, beating former welterweight champion Robbie Lawler by unanimous decision (30-27, 30-27, 30-27). Magny dominated the action not only on the ground but also on the feet to run his record to 3-0 in 2020 and likely inserts himself into the top ten.