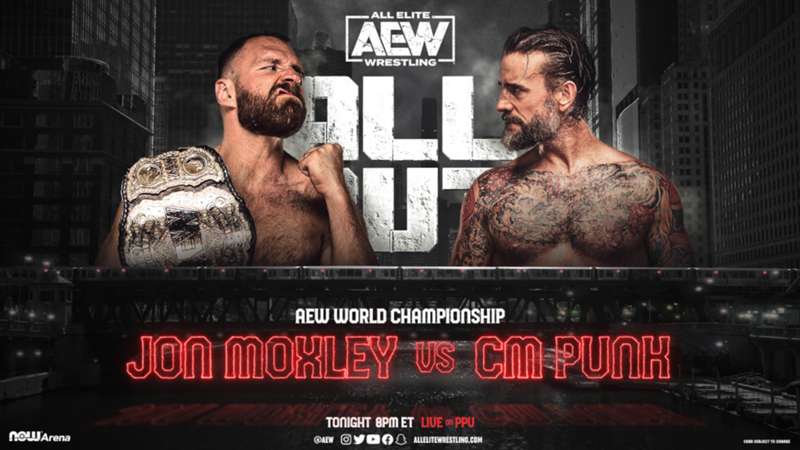 AEW
Check your region for Canelo vs. GGG 3 on DAZN

CM Punk snatches the AEW heavyweight title in his backyard.

HOFFMAN ESTATES, Ill. — AEW All Out 2022 was one of wrestling's most memorable PPVs as it signaled the start of a new era for Tony Khan's thriving promotion. With CM Punk making his long-awaited return to the ring combined with the shocking debuts of Adam Cole and Bryan Danielson, AEW presented the 2022 edition of All Out from the NOW Arena as Jon Moxley defended the heavyweight title against Punk.

Punk, a native of Chicago, didn't let the energetic crowd down as he hit three GTS' with the final two being the nail in the coffin to recapture the AEW Heavyweight title and become a two-time champion to cap off a very good show.

The match ended, and the arena proceeded to go dark. Then, a voice came over the speaker and old footage of Punk in Ring of Honor. The Joker appeared and turned his back on the screen. He took off the mask and put a scarf on, which signaled it could only be one person. MJF came out to a thunderous reaction as it was the first time he's appeared since the June 1 edition of Dynamite and cut a scathing promo on AEW and company founder, president, and CEO, Tony Khan.

Punk was standing in the ring looking at MJF and holding the belt up while MJF, who was The Joker gifted the casino chip after the Casino Ladder match, put his hands on his waist to let Punk know he's coming for the title.

Other highlights on the show included Kenny Omega and The Young Bucks winning the AEW Trios title and Toni Storm capturing the AEW Women's title.

A brilliant matchup with fantastic storytelling, which had the crowd in the palm of their hand.

After nearly getting choked, Punk hit the GTS. Moxley bounced off the ropes and laid on Punk.

Punk struggled to his feet and got up to give Moxley one more GTS for one, two, and three to become a two-time AEW heavyweight champion.

facebook twitter whatsapp
It's time for the main event of AEW All Out as Jon Moxley defends the AEW Heavyweight Championship against CM Punk.

The time for talking is down. We are here.

Sting, Miro and Allin get the win

Solid match that the crowd was into throughout. A creative finish as it came down to Sting and Black. Black was ready to hit the Fade to Black but Sting sprayed mist into his face and Allin came up and scored the pin, much to the delight of the crowd.

facebook twitter whatsapp
It's time for the co-main event of AEW All Out as Miro, Darby Allin and Sting take on The House of Black.

This should be a good one.

A pretty good match but the crowd couldn't get into it, with the last few minutes being a tad clunky.

Danielson rammed Jericho into the corner where referee Aubrey Edwards was. Jericho hit a low blow and the Judas Effect to get the surprising win. Thought Danielson would get the nod.

No Daniel Garcia in the celebration among the members of The Jericho Appreciation Society, which makes one believe we haven't seen the last of this feud.

This has all the makings of being a classic.

Despite the attack from Luchsaurus, Jungle Boy made it into the ring and told the referee he was ok to wrestle. He got up and Cage speared him. He went for the pin but Jungle Boy kicks. Cage picked him up, hit The Unprettier for the shocking pin in under two minutes.

facebook twitter whatsapp
Coming up at AEW All Out, Christian Cage takes on Jungle Boy in a battle of former best friends.

Very solid match. They had a lot to overcome, considering how invested the crowd was in the Tag Team title match. Hayter had the title won but Baker pulled the referee out of the ring. Moments later, Storm hit The Storm Zero to pin Hayter and win the interim title.

The crowd was SO HOT for Anthony Bowens and Max Caster. The crowd was wanting them to win at every turn. On a couple of occasions The Acclaimed had the belts. But the powerbomb and stomp from Strickland was enough to get the pin and retain the titles.

A fantastic match that told a really good story. An audible should have been called and The Acclaimed should have won the gold.

facebook twitter whatsapp
Right now at AEW All Out, Keith Lee and Swerve Strickland defend the AEW Tag Team titles against The Acclaimed.

The Acclaimed got a monster reaction. They are by far the most popular tag team in AEW.

Not only did Hobbs win, but he controlled a bulk of the action. Starks didn't get in too much offense. A powerful clothesline and a spinebuster for the pinfall.

Hobbs is ranked number three and seems to be inching towards a heavyweight title shot.

facebook twitter whatsapp
Now at AEW All Out, Powerhouse Hobbs battles Ricky Starks. Former tag team partners, Hobbs turned on Starks last month. This has the potential to be really good if given some time.

A slower than expected match even though it was fine. A Big Rigg from FTR onto Lethal led to multiple powerbombs from Wardlow to pin Lethal.

After the match, Samoa Joe returned to beat up Satnam Singh.

facebook twitter whatsapp
Up next at AEW All Out, its FTR and Wardlow facing off with Jay Lethal and The Motor City Machine Guns. Big reactions for Wardlow and FTR.

A short but a fun, hard-hitting affair. Cargill hit a stiff big boot followed by Jaded to retain her belt and run her undefeated record to an impressive 37-0.

facebook twitter whatsapp
Right now at AEW All Out, Jade Cargill puts the TBS title on the line against Athena.

Just a breathtaking match that told a fantastic story that featured nonstop action and a multitude of near falls for both teams. Came to Page accidentally hitting Silver with The Buckshot Lariat instead of Omega.

Nick Jackson went to Silver for the pin and we have the first Trios champions.

facebook twitter whatsapp
Now at AEW All Out, The Young Bucks and Kenny Omega take on Adam Page and The Dark Order to crown the inaugural AEW Trios champions.

Surprised this is on so early. Has all the makings of a classic.