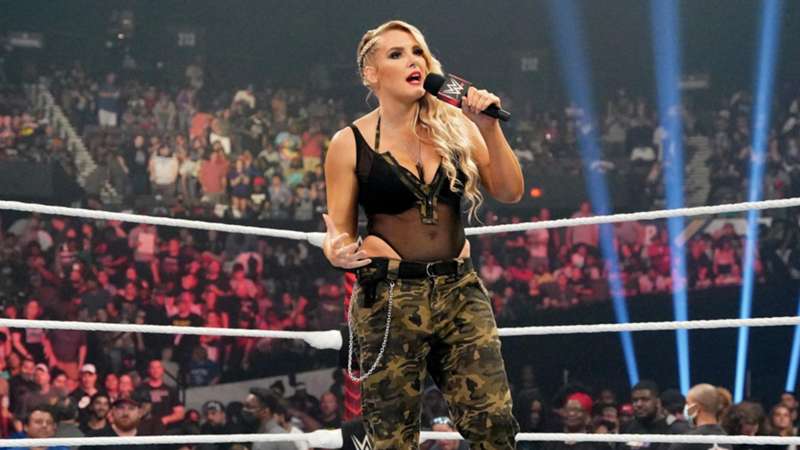 Lacey Evans has big ambitions on what she plans to do if she wins the Money in the Bank briefcase.

At the beginning of 2021, Lacey Evans was on the verge of accomplishing her dream of becoming a WWE Women's champion. She was aligned with the legendary Ric Flair and involved in a major storyline with Flair's daughter, Charlotte. She'd been set to challenge Asuka for the Raw Women's title at the Elimination Chamber pay-per-view event.

But life threw a monkey wrench into those plans when Evans revealed she was pregnant with her second child. So Evans took a leave of absence and returned to WWE in the first week of April as a babyface character playing off her life in the military and a mother of two girls. The 32-year-old has parlayed her momentum into a major opportunity on Saturday as she's one of seven women in the Women's Money in the Bank ladder match at the annual Money in the Bank premium live event from the MGM Grand Garden Arena in Las Vegas.

Looking back at how everything played out, Evans admits on the professional side that it was hard but gratifying on the personal side.

"It's difficult because you know how hard people work," Evans told DAZN. "I work hard too, and it's difficult because I was a wife at 19. I've been with my husband since I was 15, and there were two things me and my husband always knew. We wanted to get the hell out of the situations that we were raised in, and we wanted to have a big family. We wanted to be parents more than anything, and then this opportunity (with WWE) came. Of course, I'm gonna take it and do the best that I can. We still have those dreams. So it wasn't a shock to the powers that be that Lacey Evans was having a baby. That was part of the plan. But it hurt for the other people.

"It hurt for the other ones who, like you said, we're getting all this steam. We're telling the story, and then it comes to an end. There's a lot of unfinished business there that I'm excited (about and) hopefully, we could touch on (it). But I'm a mom. I've always wanted to be a mom. I think that it's exciting and career fulfilling to show the women out there that you could do both and if you work hard and put your mind to it, that you could do both. It sucked. But it's an amazing thing to be able to bring life into the world and also come back, get back in the game and start working just as hard as I was working before."

In the history of the Money in the Bank ladder match, 85 percent of the winners have cashed in their briefcases to become a world champion. Evans understands what a win in the physical affair could do for her career.

"I'm gonna do everything that I have to do to get that briefcase," Evans said. "What's in it is life-changing. I should have been a champion before. I have everything that it takes to be a champion for WWE. I want it so bad. So they can expect Lacey to go in and do what she has to do to become the champion. And that's the first step. this one opportunity."

Money in the Bank features two women's title matches. Bianca Belair defends the Raw Women's Championship against Carmella, and Ronda Rousey puts her SmackDown belt on the line against Natalya.

There have been instances at previous Money in the Bank events where the winner of the ladder match has cashed in their briefcase the same evening. But, if she does what she expects to do, Evans makes it abundantly clear who she would cash it on.

"I'm going after Ronda Rousey," Evans boldly said. "You cannot have the title as “The Baddest Woman on the Planet” with Lacey Evans anywhere near you. I disagree with that. I think she's a bad son of a gun. She's an awesome mom. She's rough. She's tough, but she's not Lacey Evans. That title just doesn't sit well with me when I'm still on this planet."