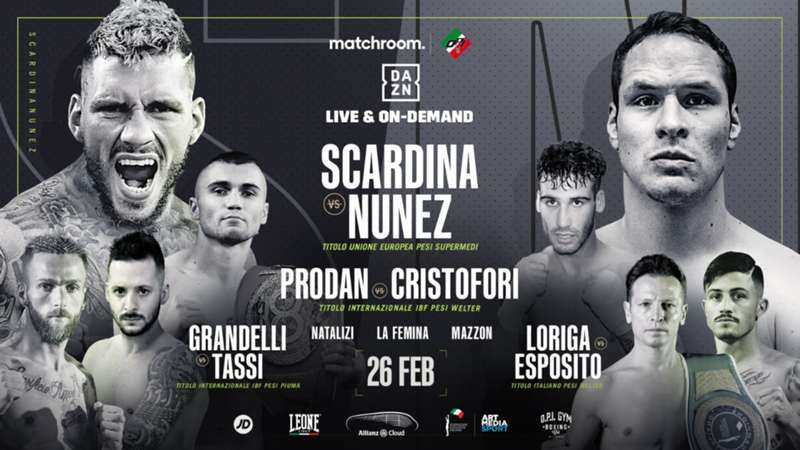 The EBU super middleweight title is on the line in Italy.

The main event and card will be shown around the world on the DAZN streaming service, on a card with two more title fights.

As well as the all-Italian lightweight clash between Francesco Grandelli and Davide Tassi, Maxim Prodan will defend his IBF welterweight belt against Nicola Cristofori.

Nicholas Esposito will also be fighting, to challenge Tobia Loriga for his Italian welterweight championship.

Here's how you can watch Scardina vs. Nunez.

The fight card commences from 6.30 p.m. local time (CET), which means 2.30 p.m on America's East coast and 7.30 p.m. in the UK. The exact time of main event ringwalks will depend largely on the undercard run-time.

DAZN will carry the card in the United States, the UK and globally. In most countries, you can sign up for a subscription here.

If you are in Argentina, Chile and Colombia you must download from the Apple App Store or Android Google Play store.

DAZN is available on web browsers at DAZN.com (except Argentina, Chile and Colombia - app only) and also has apps available for all of the following TV and streaming devices:

Where is the Scardina vs. Nunez fight?

The event takes place at the Allianz Cloud venue in Milan, Italy, the site for most major fights hosted in Italy.

Scardina vs. Nunez card in full