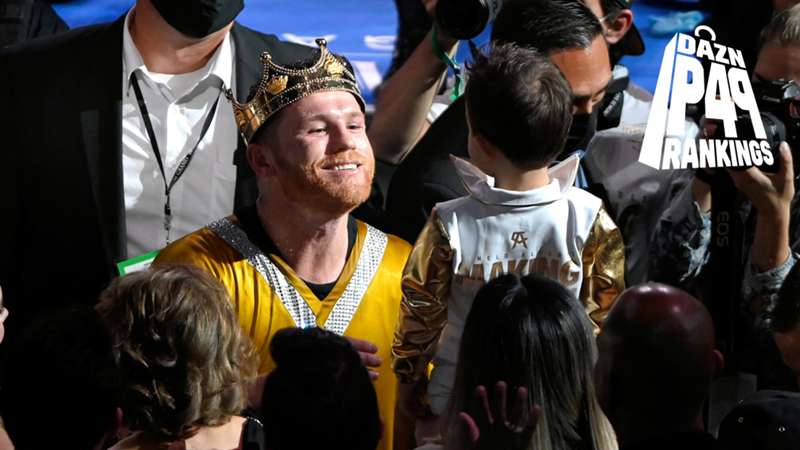 After a long period of inactivity due to the outbreak of the COVID-19 pandemic, boxing is regaining its momentum in a big way with quality fight after quality fight across various weight classes. But who exactly are the very best in the sport, regardless of division?

Here, we will track what, in our view, is the top 10 of men's fighters today. Who is on the rise and who is at risk of dropping down the charts? Find out below!

There is currently no denying Canelo's position right now, hot on the heels of his tremendous undisputed achievement. How well he can hold off other elite fighters in 2022 is set to hinge on exactly which opponents he selects now that his primary 168lbs mission is complete. And it appears that a tilt at cruiserweight could be next in his crosshairs.

The former undisputed cruiserweight king's heavyweight credentials were up for debate due to the nature of wins over Chazz Witherspoon and Derek Chisora. However his performance to dethrone three-belt champ and former P4P-ranked Anthony Joshua has proven his greatness once and for all.

Deciding who should occupy the second spot for, presumably, the remainder of 2021 was the source of a heated debate at DAZN Towers. Some believed Crawford had shown enough in the Porter fight to rise above Usyk, but ultimately Crawford sits in third place only via the slimmest of margins on the team vote. If both Terence and Oleksandr get the big fights they crave in 2022, this will remain one hell of a side contest — and even Alvarez's position will be up for grabs.

The undefeated three-weight world champ and reigning unified bantamweight king halted Aran Dipaen in December and remains a top-5 lock. However it will likely take bigger fights, such as a potential rematch/unification vs. Nonito Donaire, or perhaps clashes with a Johnriel Casimero or Guillermo Rigondeaux, for 'The Monster' to be able to challenge for the top three once more.

Another welterweight king who looked set to climb the rankings with an August win over the legendary Manny Pacquiao, until fate intervened. If he finally agrees a clash of the titans with Crawford next year, one of the two could rise all the way to the top, while the other could take a huge tumble.

The undisputed 140lbs champion has had his mandatory defence vs. Jack Catterall pushed back to February 2022, but it's a dream fight against Terence Crawford - the other man to unify the belts the Scot has collected - that likely offers his best chance of breaking into the top 5 in the future.

His trilogy fight against Deontay Wilder seemed like needless deja vu heading into the bout, but the thrilling nature of the slugfest served as decent compensation for a 20-month hiatus. Fury could even attack the top 3 in 2022, if he is able to secure a unification bout against the winner of Usyk-Joshua 2 (or if he proceeds directly to Usyk and wins). For now, the Brit moves up one slot in the wake of Lopez's big setback.

Kambosos had put together an impressive undefeated resume prior to challenging Teofimo Lopez in New York live on DAZN, but was never up for consideration for a pound-for-pound top 10 because that record did not include any big names. However, his fantastic showing in one of the fights of 2021 was enough for the new unified lightweight champion to prove himself the real deal in a late-2021 rankings update. 2022 could tell us exactly where the Aussie belongs, if he takes on even more big lightweight names.

'Cool Boy Steph' enjoyed a superb 2021, earning his first world title in January by beating Angelo Leo for the WBO super-bantamweight title before unifying that with Brandon Figueroa's WBC title on the same night as Lopez vs. Kambosos. There were some who expected the Philadelphia fighter to lose on both occasions, but instead he handed both Leo and Figueroa their first pro defeats and announced his arrival as one of the current elite.

The Ukrainian returns to the top-10 after completing a solid bounce-back 2021 with a consummate and commanding win over contender Richard Commey, after bouncing back from the disappoiting Teofimo Lopez loss by stopping Masayoshi Nakatani in June. Many fans view Lomachenko as a P4P top-10 stalwart, and he'll certainly be looking to return to higher standing via additional lightweight title reigns at the expense of the likes of Kambosos, Devin Haney and Gervonta Davis.