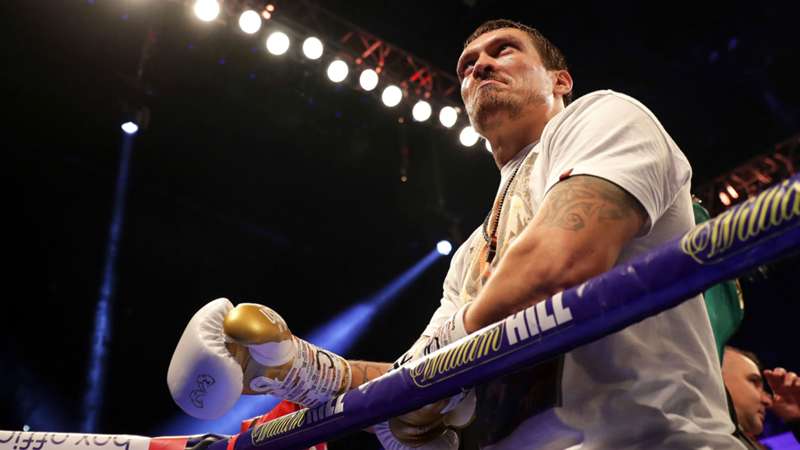 Alexander Krassyuk says everybody on Oleksandr Usyk's management team expects Anthony Joshua to sidestep his mandatory challenge for the WBO title in order to make a fight with Tyson Fury happen first.

Oleksandr Usyk (17-0, 13 KOs) will be in line for heavyweight gold if he gets past Dereck Chisora (32-9, 23 KOs) on Oct. 31, but his co-promoter Alexander Krassyuk has admitted that they do not believe that world title fight will be against Anthony Joshua (23-1, 21 KOs).

Joshua holds the WBA (Super), IBF and WBO titles at present, and Usyk will be the mandatory challenger for the latter with victory over Chisora.

But if Joshua gets past Kubrat Pulev in December, he's expected to prioritise a unification showdown with WBC titleholder Tyson Fury, assuming he emerges from the final instalment of his trilogy with Deontay Wilder with his unbeaten record intact.

In an interview with MyBettingSites.co.uk, Krassyuk explained that they would love to make a fight as big as Joshua vs. Usyk, but that the Ukrainian — who unified the world cruiserweight championship in 2018 — has no intention of prolonging his wait to become a two-weight world champ.

"Many people from a boxing audience would love to see Usyk and AJ, especially here in the Ukraine but also throughout the world.

“[But] Fury-AJ is much more anticipated because they are two British guys, two heavyweights. If there is a chance for AJ to fight Fury, I think he will vacate, that’s my personal feeling."

Earlier this week Eddie Hearn told Boxing Social that he would love if Usyk's team would at least consider the possibility of waiting until the day after Joshua and Fury have the first of what was tentatively agreed would be a two-fight contract before formally requesting their mandatory WBO championship fight, which would in turn cause the governing body to take the belt from the champion due to his obligations elsewhere.

Of course, plans can change in boxing with just one punch, as Alexander Povetkin proved at Fight Camp against Dillian Whyte. And because all parties in the heavyweight championship situation will likely have one more fight to win before a roadmap for 2021 can be finalised, Krassyuk refused to close the door on such a scenario as the one suggested by Hearn.

He explained: “We agreed that as soon as AJ fights Pulev and wins, he will have to face Usyk. This is our agreement but never on paper. This is what we agreed with Eddie when we gave the road for Pulev and AJ for the IBF.

"But there was also a term in the case the Fury fight turns out — then AJ may choose Fury as the principal fight. But one remark: it [AJ-Fury] cannot happen for the WBO belt, AJ would have to vacate.

“Anything could happen, things like Fury Wilder III may end up in favour of Wilder and if it goes that way Fury-AJ is not actual anymore. It’s so uncertain that making plans now is stupid."