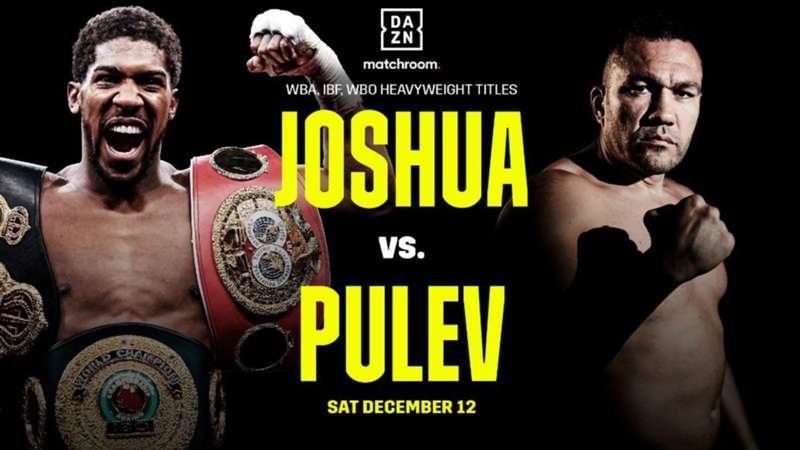 The biggest global attraction in boxing looks to close out 2020 in style and move toward an undisputed heavyweight title fight with Tyson Fury.

Anthony Joshua has been itching to get his mandatory title defense versus Kubrat Pulev out of the way to move to a possible undisputed heavyweight title clash with fellow Englishman and WBC titleholder Tyson Fury in 2021.

Joshua will finally get his chance to inch closer to boxing history as he’ll defend the IBF, WBA (super) and WBO heavyweight titles against Pulev on Saturday, Dec. 12 from The O2 in London. The fight will be shown on Sky Sports Box Office in the U.K. and streamed live on DAZN in all nine of its markets, including the United States.

Initially, Joshua and Pulev were set to square off on June 20 from Tottenham Hotspur Stadium in London. But due to the COVID-19 global pandemic, the fight ended up being postponed. With the uncertainty surrounding the virus and how to find a way to stage an event of this magnitude, no date could be locked in until now.

Joshua (23-1, 20 KOs) comes back to make the first defense of his belts since regaining them in December when he won a lopsided decision over Andy Ruiz Jr. to become a two-time unified heavyweight champion. The three-belt titleholder is excited to return to not only the ring but also to be doing it in his home country for the first time since his seventh-round TKO win over Alexander Povetkin in September 2018.

"December 12 is the date and once again the heavyweight belts go up in the air and it is my sole focus to make sure that come December 13 they are in their rightful place in the UK,” Joshua said in a press release.

“The O2 is the original lion’s den. I have a lot of history with the arena, but without the fans something huge is missing. I am really hoping that, safety permitting, we might be able to bring some boxing fans in, but we will have to see. I respect every opponent and I respect Pulev. I wish him well during his preparation.”

Pulev (28-1, 14 KOs) earned the title shot, ranked the No. 1 contender by the IBF. The 38-year-old gets another opportunity to become a heavyweight champion. He came up short in November 2014, losing via fifth-round knockout to Wladimir Klitschko. Since suffering the only loss of his career, Pulev worked his way back up the ladder to title contention by winning eight consecutive fights. The Bulgarian looks to right the wrong of the Klitschko fight and bring the gold home to his native country and spoil the plans of Joshua vs. Fury.

"For a small country of Bulgaria to stand up for the heavyweight titles is a great accomplishment," Pulev said. "This fight is for my late father and all Bulgarians around the world! I’m coming to London to seize the heavyweight championship of the world.”