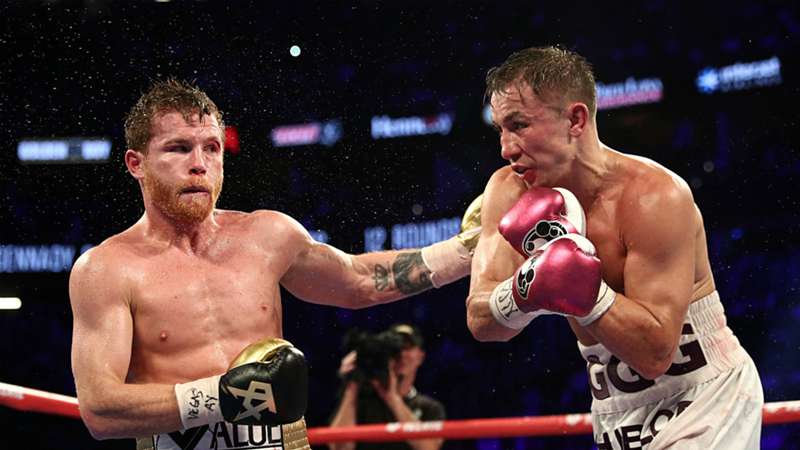 (Getty Images)
Check for this fight on DAZN in your country

The Matchroom boss struggled to contain his excitement on The DAZN Boxing Show.

Four years on from their rematch, Saul 'Canelo' Alvarez and Gennadiy Golovkin are set to meet in an eagerly anticipated trilogy fight on September 17 live on DAZN.

After losing to WBA (super) light-heavyweight champion Dmitry Bivol on May 7, promoter Eddie Hearn believes the stakes couldn't be higher for Canelo ahead of this career-defining fight.

"The first two fights were two of the greatest fights we’ve ever seen firstly," Hearn told The DAZN Boxing Show.

"Secondly, the mirage of Canelo being this unbeatable fighter doesn’t exist, the reality is coming off two losses almost puts your career in the balance.

"We know that Canelo went up to 175, it was a big ask, but he was expected to win that fight."

The first fight between the pair in 2017 ended in a controversial draw, while Canelo triumphed in the second contest a year later on points and now the Mexican needs to replicate another winning performance to get his career back on track according to Hearn.

"He has to win this fight, if he loses to GGG on September 17th, where do you go from there?

"Back-to-back defeats against two different fighters, this time with almost no excuse.

"The toughest thing for Canelo in this fight is to bounce back from that defeat, he was devastated to lose to Bivol."

There's no surprise that Canelo is being labelled the favourite for this fight, but Hearn claims the move from middleweight to super middleweight will be huge benefit to for Golovkin.

"Gennadiy Golovkin sometimes gets a little bit of criticism from the Murata fight, but the guy hadn’t boxed for over 400 days, went out there, he sometimes starts slow and then he just went into overdrive and brutalised the guy.

"I think the move to 168 is going to really help Gennadiy Golovkin, don’t forget he’s been at 160 for nine, ten years of his career.

"I thought he looked a little bit weight drained out there in Japan, and I think 168 is going to help him.

"I think it will be a brutal fight, this fight won’t go 12 rounds in my opinion.

"I think Canelo Alvarez with the spite he’s going to have coming off the defeat and the dislike he has for Gennadiy Golovkin and vice versa, I think these guys are going to go at it."