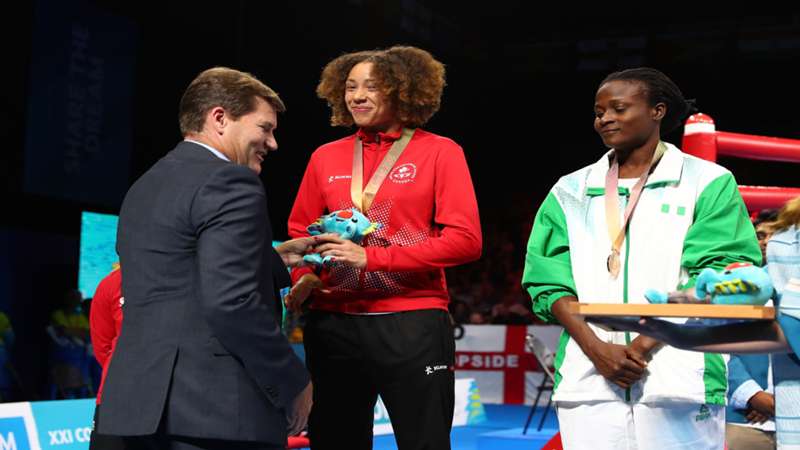 After the 2020 Tokyo Olympics were canceled last year due to COVID-19, there were questions whether the Games would actually take place. Despite growing concerns about the coronavirus in Japan, the IOC says the Olympics will be a go and they will start officially on Friday.

One of the signature events of the Summer Olympics is boxing. Starting on July 28, the women's middleweight weight class begins with the opening round of 32.

Among the favorites to medal is 24-year-old Tammara Thibeault of Canada. Thibeault won gold at the 2017 Canadian Championships and went on to win gold in her first senior international tournament, the American Continental Championships. She represented Canada at the 2018 Commonwealth Games and won bronze.

Before she departed for Tokyo, Thibeault sat down with DAZN News to discuss the journey to get to the Olympics, why she wanted to get into boxing, and whether she ever plans to turn professional.

DAZN: How weird has this whole entire process been to get to Tokyo?

Tammara Thibeault: Honestly, it's been ridiculous. Like, our long-term plan. And training is like a five-day plan. It is just constantly like, ‘What's our long-term plan?’ It's constantly switching. It's been a hell of a roller coaster. As soon as they said the Olympics are coming up, American qualifiers are canceled. This is going to be a hell of a roller coaster. I just anticipated that this whole thing was just going to be a full-on adventure. There's twists and turns, ups and downs. It's been a mess, honestly. Canada has been really difficult because we have a lot of restrictions. Our restrictions have been exhausting.

DAZN: What have you been able to do right now in terms of training for Games?

TT: We’ve been lucky because we are at the Olympic Stadium [in Montreal], and people who are going to look at are on the Olympic pathway. We all have that. We have that privilege. The gyms are open, and we're able to train, and we still have our partners. It's pretty much normal. For a little while, they had us working out with our masks. When you breathe, and I do out of my mouth, my mask is full of spit all the time. It's so gross. I would just rip it off between rounds. I'm just so mad. They're like, ‘Well, this is what it’s gonna be like in Tokyo.’ I put that thing back. I was like, 'Shoot, if this is what we have to do, then let's do it.' It's just been so crazy that these Games are going to mean everything. Just the fact that we got there. It's just an accomplishment in itself because a year ago, we didn't know if they were still going to go on.

DAZN: When did you get word that you weren't going to be going to Tokyo last year?

TT: I didn't believe it at first. I was like, ‘No way.’ We had World War II going on, and there was an Olympics. At first, I shut down for two weeks. I'm super, super close with my family. I was like, Alright, two weeks (off). I was like, ‘You know what, our Olympic qualifiers are canceled. I'm going to go home to my family.’ I've been away from my family because I had to move to the city to be in the centralized program. I'm just going to go home, hang out with my family. I just went on pilot mode. I was like, ‘Alright, just like keep working out keep doing your stuff. You never know what's gonna happen.’ I live in a residential area with my parents. So the kids are shooting basketballs. I just drag out my boxing stand, hang up my bag, and [start] hitting the bag.

DAZN: What are the protocols going to be in Tokyo?

TT: I don't really know. From what I understand because my weight class starts on July 28, we can only be there for a certain period of time before we actually start competition. So it's super complicated. It's like once your competition is over, you have 24 or 48 hours, and you got to go out of the village. It's like get out of sight, out of mind. You can't even stay until the closing ceremonies. You come here. You perform, and after it, it's over. It's going to be strange even though I've never been to an Olympic Games before. I'm pretty sure that's not usually how it goes. It's going to feel weird. From what I fear, we're going to be quarantined quite a bit. Honestly, anything that I can get my hands on to do some stuff.

TT: Everyone, I’m six feet tall. Ain’t no way anybody’s butt flipping me into a pretzel. It’s not happening. My brother was a wrestler. I went once with him to practice, and I was like, ‘You know what? No.’ I was a boxer and the baller (basketball). I was on the court, or I was in the gym and a boxing gym. So I started because of my dad. He was a football player. We got a couple of athletes that are in our family. I got in boxing because my dad did this during the offseason. When he was [a] professional back in the early 2000s, it was just different times. He was a very athletic guy. He was a competitive guy, and he was all about boxing. He brought my older brother into boxing as he wanted to toughen him up a little bit. He was a little soft.

I was nine years old. I was deaf. I was still a kid. They would bring the kids to the boxing club on Fridays. And Fridays was the day when Dad said, you come to the Boxing Club, you train right, and we'll go grab something to eat after, and when you're up past your bedtime, one kid would be like, I don't want to go. I was like, ‘You can take me to McDonald’s.’ We did that for a little bit. My mom took us kids — we're four kids — to Swift Current to see my dad compete. It was the first time I saw anybody compete. My dad knocked this guy out cold out. I was like, ‘That seems very empowering.’ It might be a little bit sadistic for a nine-year-old to think that. I want that power. My dad was 6-foot-2 and 200 pounds. I'm 6-foot, but women's boxing is very different. I can see that now being on the circuit, it's just a whole different ballgame. My dad was my hero. I just wanted to be like my dad. I wanted something to relate to because he was an athlete. He was gone a lot. He was around but not around. We'd go to his practices. He would do his best. Any moment that we had with our dad was good. We found our thing, and it still is our thing.

DAZN: Because of that common thing you guys have, is he your biggest source of inspiration through this journey for you, or is it somebody else?

TT: Oh, for sure. It's both my parents. My dad is very present in the actual space of boxing, but my mom is my rock. I call my mom three times a day. It's ridiculous. I call my mom, she don't answer the house. I call her cell phone. Don't answer, I call my little brother. We're very, very close. I think both my parents are a sense of inspiration for me. I don't know what I’d do without them.

DAZN: When you're lying at night, or you're just sitting there, watching TV, playing on your phone, do you give yourself a moment to think about what it would feel to medal or you try to stay just centered on the moment, and when you get to Tokyo then maybe you think about it a little more?

TT: I've been thinking about it my whole life. Sometimes, I'll just picture what it would mean. I just had this image in my head of the Olympic finals, and my hand raised. I want that again. I think about it from time to time. I try not to think about it too much because it's important to trust the process. I'm very young. I'm on a couple of [Olympic] cycles. It's important to trust the process. It's important to stay focused on the sport. I want an Olympic medal. I want that more than anything. But what I want more than that is I want to go to the Games, and I want to perform. I want to leave satisfied with what I left in the ring out there, win or lose. If I gave it my very best and I did everything that I could in my power to bring my game up. I was satisfied no matter what. What would be satisfying is a gold medal around my neck.

DAZN: If you don't win and you don't do what you're expected because you are expected to medal — Is anything less than a medal a failure to you?

DAZN: You said something about the question before about wanting to go through a couple of Olympic cycles. Do you want to go professional, or do you just want to see how each cycle goes for you?

TT: I think I would like to go fresh. It would be really cool. Right now, even women's boxing doesn't get that much exposure, and that kind of sucks. Because if I want to do it, I want to be a  superstar. My thing is, I want to go big or go home. I want to wait and see how it plays out over the next couple of years. Women's boxing has really been kicking it up a notch year after year, cycle after cycle. I want to see where it goes. Then if the opportunity presents itself, I'm all in. My coach would really like that because he's had Olympic medalists. He's lifted gold medals. He's like, ‘I don't have a professional world champion.’ I want to be able to give that to him because I've been on this journey to Tokyo. I just want to make him proud.

DAZN: Who do you enjoy watching in boxing?