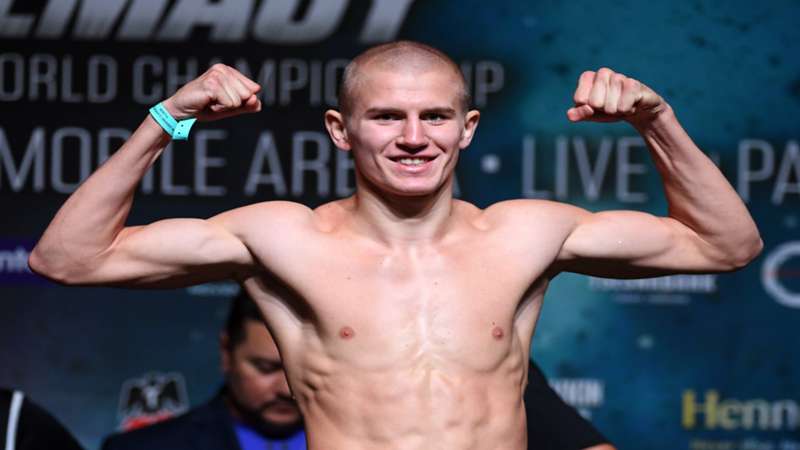 The hard-hitter from Ukraine speaks to DAZN News days before his first main event tilt in the United States.

Junior middleweight contender Serhii Bohachuk looks to take the United States boxing scene by storm on Thursday night when he competes in the main event against fellow contender Brandon Adams from the Municipal Boxing Gym Felix Pagan Pintor in Guaynabo, Puerto Rico. The bout was supposed to happen in December but Bohachuk contracted COVID-19 the week of the fight, so it got rescheduled for this date.

Bohachuk (18-0, 18 KOs) is a hard-hitter from Ukraine who has finished every opponent he's stepped inside the ring with. Like many boxers, the 25-year-old didn't get much ring time in 2020 because of the coronavirus and only ended up fighting once when he stopped Alejandro Davila in September. Now, Bohachuk looks to make a lasting impression in his first main event on American television as he treks towards world title contention.

Ahead of his first headlining spot in America, Bohachuk (through an interpreter) talked to DAZN News about the opportunity of being on the marquee in the U.S., recovering from COVID and when he feels he'll get the opportunity to fight for his first world title.

DAZN News: I know you had COVID, which caused this fight to be moved to Thursday. How are you feeling right now?

Serhii Bohachuk: Okay. For the past month, we got the same question from all the reporters who call. If people wouldn't ask me this question, I will forget about it completely. So I feel great. Much better than before COVID. I'm ready for the fight.

DN: How bad were your symptoms?

SB: I lost taste. For smell, that was number one and number two, and it was mild. I feel like I got the flu, pains in the joints, and had a [high] temperature one time. I got very good health from his promoter. Some 22nd-century doctor attached me to some machine. They figured out everything. They gave me multiple vitamins. In one week, I felt great. Of course, the test showed I was still positive, but maybe another week, I tested negative. I decided to go back to Ukraine to see my family for relaxation.

DN: You're headlining your first event on national TV here in the United States live on NBC Sports Network.  I want to know what does it mean to you to be headlining a big show here in the U.S.?

SB: Extremely honorable for me to fight on national TV. I appreciate everybody, starting from my promoter, and everybody who was involved to make this happen on national TV. I will do my best to show the American people and to the people who will watch overseas because we've got information that the fight will be translated even in Ukraine, my home country. So I'm extremely happy, and I will show the best of me.

DN: When people think of Ukrainian boxing, they think of Vasiliy Lomachenko and the Klitschko brothers. Are those guys that you looked up to?

SB: I got big respect for Ukrainian boxers like Loma, the Klitschkos and [Oleksandr] Usyk. Now is my time to become recognizable in Ukraine. After this fight, I will become not like Loma but very close to a national hero. I appreciate everybody who helped to make this happen.

DN: You're 18-0 with all 18 wins by knockout. What do you attribute the knockouts to as you don't see fighters beating everyone by KO?

SB: It comes naturally. When I started boxing professionally, professional career, I never thought about finishes. When I step into the ring with one thing on my mind, and that's to win the bout. I'm naturally strong. My punches are outstanding, and that's the way it's coming. But it's not a goal for me to finish. I'm ready to go ten rounds and even 20 rounds. It's important for me when I step in the ring, and when the round starts, my goal is to finish and, one way or another, stay in the middle of the ring with the referee raising my hand up.

DN: What do you make of Brandon Adams overall as a fighter?

SB: Very knowledgeable, and a good fighter, good opponent. This fight is crucial to me because it will open up my future. My goal is to fight for the belt. Brandon will be good practice because of his experience because this will be the most crucial and most important fight in my boxing career. I'm preparing for this fight hard because this is the fight that will bring me closer to the title.

DN: With that said, how many fights do you think you are away from getting a title shot at 154 if you win on Thursday night?

SB: It's not in my hands because I'm ready right now to fight for the belt. It's a lot of work. Like  I said, I'm ready. Whatever it will take. It doesn't matter how many bouts I need to go to the final one. I'm ready. Maybe it's one, two, or three fights. It doesn't make a difference with me. But of course, I'd like it as soon as possible.

DN: How do you imagine that you're going to beat Brandon Adams?