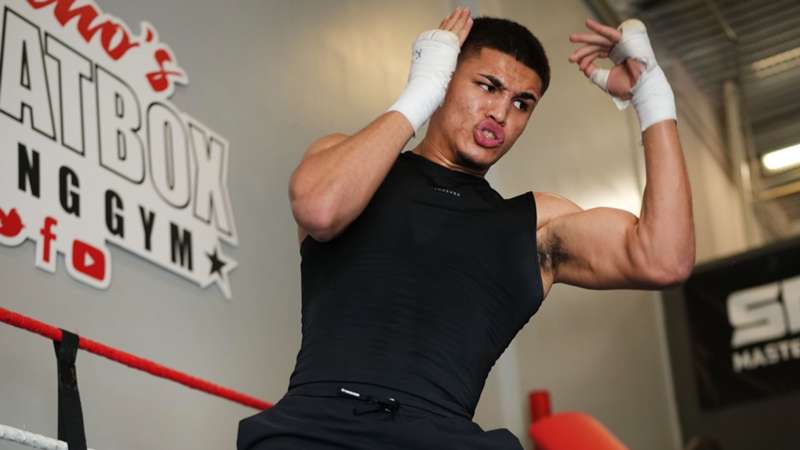 (Top Rank)
Watch Wood vs. Conlan on DAZN (except Aus and NZ)

The 19-year-old is hungry to transform his top prospect status of 2021 into a dangerous contender this year, beginning with a fight against Quincy LaVallais next weekend.

Xander Zayas’ diligent grind has him on a tracked trajectory up the boxing ranks.

After fighting six times in less than 10 months last year, the star prospect is planning to use 2022 as a springboard platform to land a world title shot in 2023. And the Puerto Rican sensation can begin making inroads toward that target next Saturday night at Madison Square Garden where he’ll face Quincy LaVallais in a junior middleweight co-main event tilt set for eight rounds.

The 19-year-old has his blueprint all unfurled and plotted out.

“The goal for this year is four fights at least, keep improving the opposition, wind up fighting 10-rounders and finishing off the year top 15 in the division,” Zayas tells DAZN News matter of factly over a recent phone call. “The goals are set and I’m working toward all of those. I’m working toward accomplishing all of them, and man, it’s just up for me.”

Zayas (12-0, 9 KOs) lands and wins those four fights this year, just as he did the six bouts in 2021, and the young, confident boxer believes that a world championship opportunity would present itself soon thereafter.

“I think 2023 should be the year that I’m fighting for a world title,” Zayas says. “Maybe mid or end of 2023. I just got to stay the course, keep winning, keep getting better, keep improving and keep showing everyone that I’m coming for everybody in the division.”

The 154-pound division currently touts Jermell Charlo as its IBF, WBA and WBC champion with Brian Castano owning the WBO hardware. Charlo and Castano are set for a unification rematch May 14. Zayas, who has etched a fan-pleasing fight game early into his pro career, is impressed with both.

“They are great champions,” he offers. “They are the top of the division for a reason. They’ve shown it, they will keep showing it.”

The praise upfront, though, is accompanied by a pointed caveat on the back end.

“They’re great champions,” he continues, “but when my time comes, I’m sure I’ll be ready to take on that opportunity.”

Another solid body of work could have Zayas knocking on that door, whether it be 2023 as planned or beyond.

Until then, Zayas will look to continue to shine just as he did in December, when he certified his Prospect of the Year credentials with a highlight first-round TKO of Alessio Mastronunzio.

The bout saw Zayas unload a big right hand across the jaw to put the Italian on his backside just 11 seconds into the fight. The fighter out of San Juan then unleashed a left uppercut that landed flush under Mastronunzio’s chin and swiveled his head from right to left with a punishing right hook. The combination staggered and backed Mastronunzio up before a few more punches brought the fight to an end. Electric end.

That performance came at Madison Square Garden. Let’s see what he’ll do at “The Mecca of Boxing” this time around to further his cause.