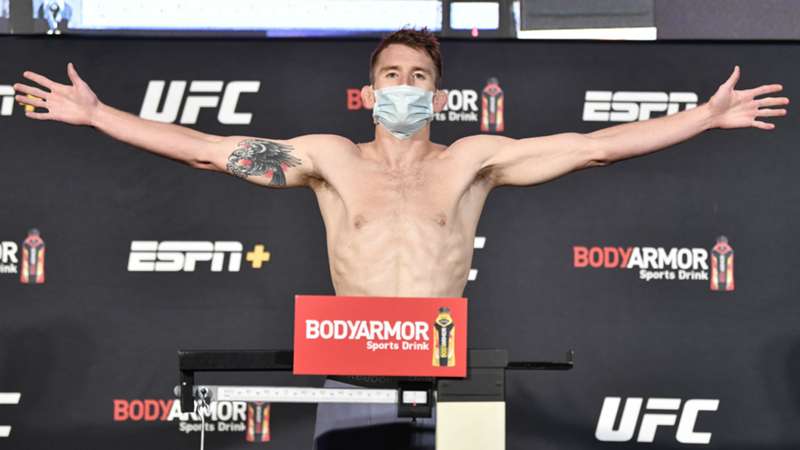 Cory Sandhagen appeared to have firmly secured a crack at the UFC bantamweight title when he delivered a "Knockout of the Year" candidate via a 28-second KO of former lightweight champion Frankie Edgar.

THE SANDMAN HAS PUT EDGAR TO SLEEP. #UFCVegas18 pic.twitter.com/z4flxeDG05

All he had to do was wait to see who'd come out the winner of the title clash between Petr Yan and Aljamain Sterling at UFC 259. But the fight ended in controversy when Yan threw an illegal knee and was disqualified, and Sterling became the new 135-pound champion. When UFC president Dana White said Sterling and Yan would run it back when the former would return from neck surgery, it left Sandhagen in a conundrum. Does he sit and wait for the winner or take another fight in the interim and roll the dice?

Sandhagen chose the latter and will take on former two-time bantamweight champion TJ Dillashaw in the main event of Saturday's UFC Fight Night from the UFC Apex in Las Vegas. On paper, the fight makes sense because of Dillashaw's resume. But when taking a deeper dive, it's hard to understand why Sandhagen would risk a shot at the belt due to Dillashaw returning from a 30-month layoff after being suspended for two years after testing positive for EPO in his January 2019 first-round TKO loss to then-flyweight champion Henry Cejudo and coming off a highlight-reel KO over Edgar.

"I appreciate the level of rationality that you have," Sandhagen said candidly to DAZN. "But I don't think that same level of rationality is everywhere. I think we're in an entertainment business and I think name value is very important. It was either fight a really big name or wait until these (Sterling and Yan) guys are going to fight. Who knows when they're going to fight and who knows what's going to happen in that fight like an injury, whatever. I didn't want to sit on the bench for a year and a half or two years if I wasn't taking this fight.

"So why not score another really good name, and go in with even more hype around me?"

Sandhagen watched Sterling-Yan so he could start gathering some intel on both fighters. When the foul occurred and the fight was stopped with Sterling being declared the new champion, Sandhagen felt only one way about how everything went down.

"I was quite embarrassed for the both of them," Sandhagen admitted. "I'd say, ‘Yan, don't be an idiot and throw something that flagrant. Have this sense of wits about you in order to not throw the fight away. You were winning. You were probably going to finish him before you did that. So why do that?'

Coming into this weekend's fight, some feel Dillashaw has been on performance-enhancing drugs his entire career. Sandhagen is of the notion that Dillashaw learned his lesson and is clean.

"Hmmm, I think so," Sandhagen said. "Probably. Again, if he isn't (off PEDs), fine. If he is (off PEDs), great, I don't really have an opinion about it. It would be speculation, and I'm not huge on speculating. If he is, he's still going to get his ass put out.

"Honestly, man, I've been fighting in MMA for about 10 years now, so I've pretty much gone through my entire career just assuming that everyone is on steroids. Before USADA (UFC’s anti-doping partner), it was the Wild West. I've kind of always approached every single fight like, ‘If this guy's on stuff, awesome’. Those lower-level fights, they're not testing people there. I've gone my whole career just assuming that dudes are taken stuff, and it doesn't impact me at all."

Before the suspension, Dillashaw was regarded as one of, if not the greatest bantamweight of all time, with two wins over former 135-pound champ Renan Barao and two victories over Cody Garbrandt. However, there are those who feel Dillashaw's legacy will forever be tarnished. Don't count the No. 2-ranked Sandhagen among them, as he feels this is the biggest fight of his career and a win leaves no doubt on who should face the Sterling-Yan 2 winner.

"This one is this one that stamps the passport," Sandhagen said. "I get to fight for the title after this one. This is that fight. Going into the Frankie fight obviously went the way that it went, so I was a little bit more confident in that too. But this to me, is the stamp in the passport. This is beating one of the guys that's considered one of the greatest bantamweights of all time. What this fight is to me is definitely the biggest fight of my career."