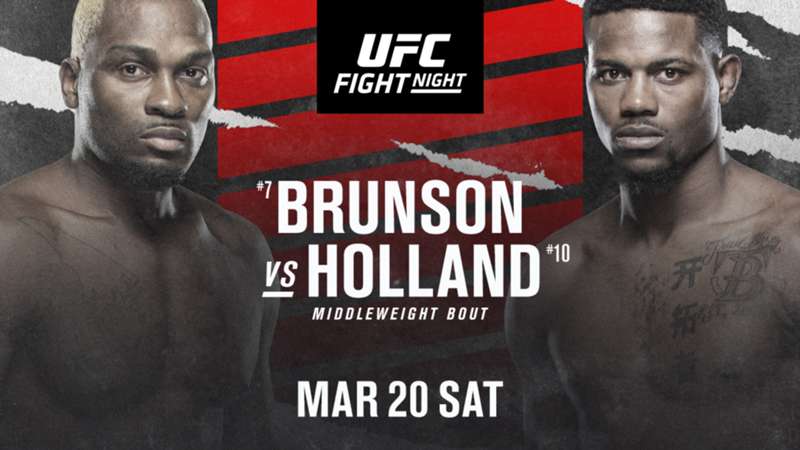 Derek Brunson takes on Kevin Holland in an intriguing main event on the next UFC card.

The next edition of UFC Fight Night is this Saturday, and the main event pits No. 7-ranked Derek Brunson against No. 10-ranked Kevin Holland in the middleweight division.

Veteran contender Brunson will look to stop the hot streak of rising star Holland and move closer to the title picture, and he recently told MMA Junkie that his opponent's attempts to get inside his head are not working.

“It’s funny, he’s doing the exact same thing ‘Izzy’ did. He’s calling me ‘Bumson,’ and I’m like, ‘Bro, ‘Izzy’ said the same thing. You’re trying to do exactly what he did.’ So I haven’t been engaging with him because I’m going to fight the way I fought my previous couple of fights.

“I’m going to look to knock you out regardless, so like I’m not going to be satisfied until I trap your arms and TKO you. That’s how the fight is going to go no matter what is said or how much trash you’re talking. It’s not going to change the way that I fight.”

Here is everything you need to know about UFC Fight Night: Kevin Holland vs. Derek Brunson.

When is UFC Fight Night: Kevin Holland vs. Derek Brunson?

UFC Fight Night: Holland vs. Brunson will take place at the UFC Apex in Las Vegas. Holland competes at the Apex for the fifth time while Brunson steps into the venue for the second time.

How do I stream UFC on DAZN?

Here is a list of the devices where DAZN is available, including  web browsers on DAZN.com :