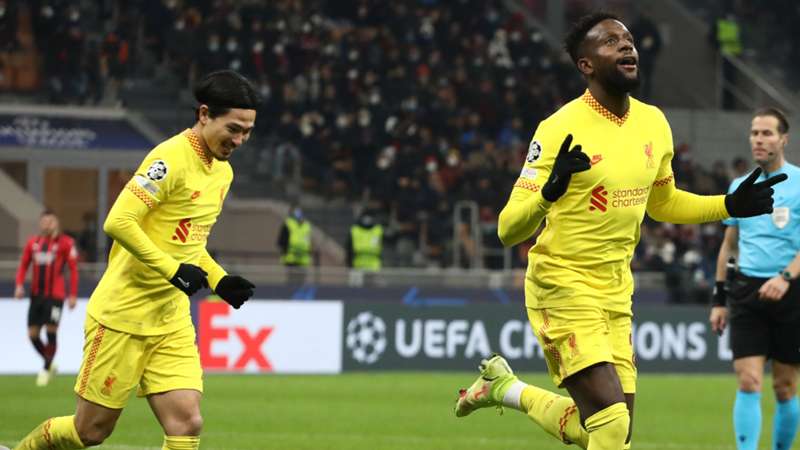 Jurgen Klopp's men became the first English side to win all six group-stage matches of a UCL campaign.

Liverpool completed the group stage of the 2021-22 UEFA Champions League with a perfect record after the Premier League giants defeated AC Milan 2-1 at the San Siro on Tuesday.

The Reds' lineup included several players who aren't usually in Jurgen Klopp's starting lineup, but familiar names like Mohamed Salah and Divock Origi rose to the occasion as they each scored for the visitors in the comeback victory.

The first English club 𝗲𝘃𝗲𝗿 to win all 6️⃣ games of a #UCL group phase!

The teams traded similar-looking first-half goals, with Fikayo Tomori scoring for Milan in the 29th minute and Liverpool ace Salah striking in the 36th. Tomori's opener came off a corner kick, when Alessio Romagnoli's effort from in close was parried away by Liverpool goalkeeper Alisson. Tomori was the quickest to the loose ball and fired into the gaping net from a couple of yards out for his first European goal.

Not to be outdone, Salah also pounced on a juicy rebound after a teammate's shot was saved by the Milan 'keeper, but the Liverpool equalizer came during the run of play rather than off a set-piece.

Needing a result to have a chance at the last-16, Milan saw their hopes fade away in the 55th minute as Tomori miscontrolled a ball right into the path of Sadio Mané near the top of the penalty area. The Liverpool attacker quickly put a left-footed effort on goal that was blocked by Milan goalkeeper Mike Maignan, but the ball deflected directly to Origi for a well-placed header under the crossbar.

That served as a death knell for Milan's European aspirations, as Liverpool thwarted any foray the hosts could put together for the remainder of the match. Franck Kessié did manage to break free with five minutes left on the clock, but Alisson was quick off his line to force a rushed shot by the Rossoneri midfielder that was easily saved by the goalkeeper.