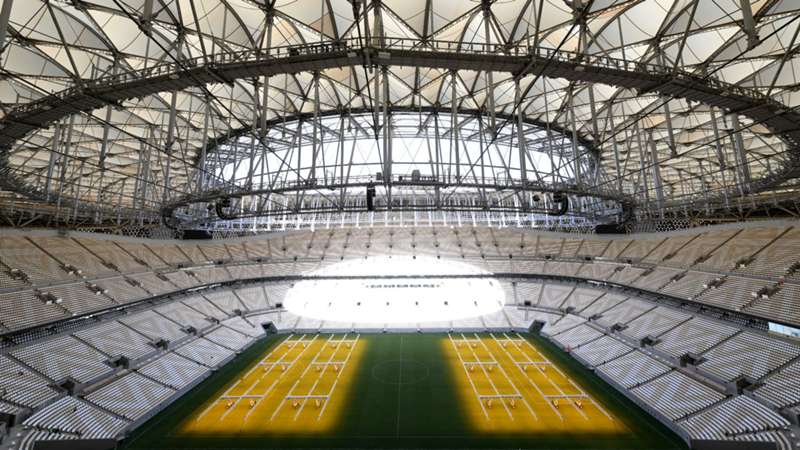 Most of the venues are newly built.

Stadiums can help define how a host country is perceived, and they often are as big a talking point as the stars leading their respective sides on the world's biggest football stage.

Qatar 2022 is no different in that regard, with many of the stadiums newly built specifically for this event. There are eight different grounds scheduled to host matches at the upcoming World Cup, all with unique characteristics.

DAZN runs down the list of all eight below.

What stadiums are being used for the 2022 World Cup?

A 60,000-seat venue in Al Khor, the Al Bayt Stadium features a retractable roof and will be reduced in size by nearly half of its seating capacity after the World Cup.

Completed in November 2021, the stadium was used for the opening ceremony of the FIFA Arab Cup 2021. It also hosted five matches during that tournament, including the final.

At Qatar 2022, the stadium will host six group stage matches and three knockout games, including a semi-final.

Perhaps the most interesting of the Qatar 2022 venues, Stadium 974 is unique not only because of its name.

The number referenced in the venue's moniker is no coincidence — 974 is Qatar's international dialing code and also represents the number of shipping containers used to construct the stadium. Holding 40,000 seats, the modular stadium is the first temporary venue in World Cup history, and will be completely dismantled following the tournament.

Five matches of the 2021 FIFA Arab Cup took place at the venue, and seven World Cup games are scheduled to be played there.

Along with two other venues, the Al Thumama Stadium is the smallest at Qatar 2022 but is probably the most visually unique of them all.

One of two grounds in Al Rayyan, the Education City Stadium gets its name from the university district in which it stands.

At 45,350 seats, it's one of the smaller stadiums in the World Cup, and will be further reduced post-tournament to a 25,000-seat capacity. The stadium held four matches in the 2020 FIFA Club World Cup, including the final between Bayern Munich and Tigres UANL.

During the World Cup, the Education City Stadium will host eight matches in total.

Officially named the Ahmad bin Ali Stadium, the Al-Rayyan Stadium is nicknamed as such due to the city in which it stands.

The 50,000-seat venue is actually the second stadium to be built on the same spot, with its predecessor holding less than half the capacity and standing from 2003-2015.

Home to Al-Rayyan SC and Al Kharaitiyat SC of the Qatar Stars League, the stadium opened in 2020 and has since hosted matches in the 2020 FIFA Club World Cup and the FIFA Arab Cup 2021. More recently, the stadium hosted the two intercontinental play-off matches that determined the final two countries (Australia and Costa Rica) to advance to Qatar 2022.

Home to Al-Wakrah SC of the Qatar Stars League, the Al Janoub Stadium features a retractable roof and 40,000 seats.

The stadium design is meant to invoke the history of the Al Wakrah area, and the seats invoke a wave pattern to emulate the sea. Having opened in 2019, the venue hosted the 2020 AFC Champions League final as well as six matches during the 2021 FIFA Arab Cup.

Seven matches will be held at the Al Janoub Stadium during the World Cup, after which it will be downsized to 20,000 seats.