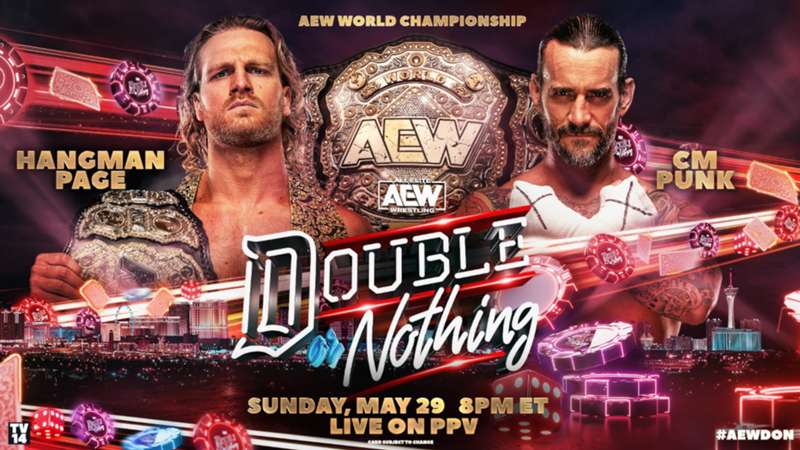 CM Punk challenges for the AEW heavyweight title for the first time.

All Elite Wrestling returns to the city where they held their first-ever event as the organization presents Double or Nothing on Sunday from a sold-out T-Mobile Arena in Las Vegas. The inaugural event was Double or Nothing in May 2019 from the MGM Grand Garden Arena.

At the time, CM Punk wasn't even in the company as he didn't make his return to pro wrestling until August. Fast forward nine months, and now Punk's their biggest star and headlines this weekend's show as he challenges Adam "Hangman" page for the AEW heavyweight championship.

After defeating MJF at March's Revolution event, Punk has made it clear that he was gunning for Page and the belt. Since capturing the title from Kenny Omega at Full Gear in November, Page has successfully defended the belt against Bryan Danielson (twice), Adam Cole (twice) and Lance Archer. Now, he's got his toughest defense to date.

Also on the show will be men's and women's Owen Hart Cup Tournament Final matches, The Young Bucks vs. The Hardys, and the Jericho Appreciation Society (Chris Jericho, Matt Menard, Angelo Parker, Daniel Garcia, and Jake Hager) vs. Eddie Kingston, Santana, Ortiz, and The Blackpool Combat Club (Bryan Danielson and Jon Moxley) in an 'Anarchy in the Arena' match.

Every AEW pay-per-view has delivered, and Double or Nothing 2022 should be no different.

Here is everything you need to know about AEW Double or Nothing 2022.

What time does AEW Double or Nothing 2022 start?

AEW Double or Nothing 2022 begins with the 'Buy-In' preview show starting at 7:00 p.m. ET and the main show underway at 8 p.m. ET. The card is expected to last around four hours.

How to watch AEW Double or Nothing 2022?

AEW Double or Nothing 2022 will be streamed live on Bleacher Report app in the United States and on FITE.TV everywhere else around the world.

If you don't have capable internet speeds, you can order Double or Nothing through your cable or satellite provider for a pay-per-view price of $49.99.

AEW Double or Nothing 2022 match card