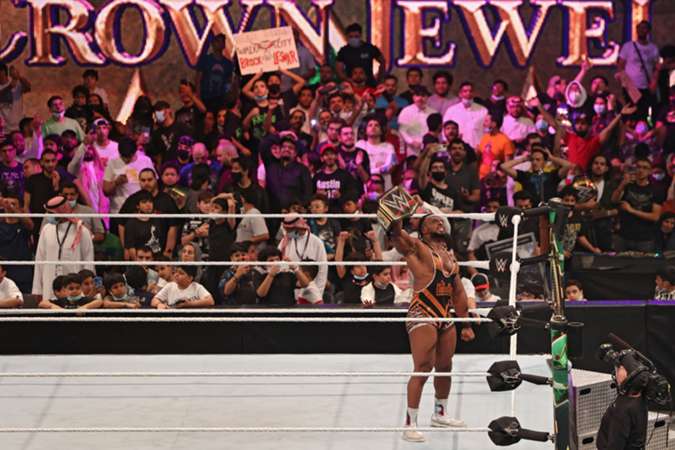 His title reign might have been short but Big E delivered plenty of sticking points according to The New Day fellow member King Woods.

Despite that reign being relatively short-lived, it was memorable. Not to mention, historic.

When Big E successfully cashed in on his Money in the Bank contract on Sept. 13 to shock and swipe the title away from Bobby Lashley on Raw, he became only the fourth Black WWE champion in the company’s history.

And that rousing victory would became the launching pad for electric moments including his successful title defense against Drew McIntyre via a hard-fought match at Crown Jewel in October and enough scintillating run-ins with Universal champion Roman Reigns to pave the way for them to main-event Survivor Series in November. Though Big E fell short in that match, the Champion vs. Champion match thrilled.

The two were supposed to clash again at WWE Day 1 on Jan. 1 but those plans were dashed when Reigns tested positive for COVID-19 and Big E found himself in a Fatal 5-Way match against Lashley, Seth Rollins, Kevin Owens and Brock Lesnar instead with the latter ultimately claiming the title.

All that being said, when fellow The New Day member King Woods looks back on Big E’s WWE championship run, he doesn’t only remember some of the aforementioned moments, but also how the 35-year-old was able to transcend the ring.

“Seeing him get to go on this tear as champion was incredible,” Woods told DAZN News during a recent Zoom call.

As champion, Big E did everything from help introduce Tyson Fury and Deontay Wilder for their epic trilogy fight at the T-Mobile Arena in Las Vegas to rile up his former University of Iowa college football team.

For good measure, he helped introduce Shawn Porter for his welterweight tilt against Terence Crawford in Las Vegas this past November.

The magnitude of impact Big E has had with each of those appearances only helps expound what it means to be WWE champion in King Woods’ eyes.

“Seeing him at college football games, boxing matches, UFC fights ... everyone realizing that the heavyweight champion of WWE is very important. He is the guy. The women's champion is the woman,” Woods explained.

“So, seeing E reaching into that bag,” he continued, “and making sure that people understood that first and foremost was how I’ll remember his run.”