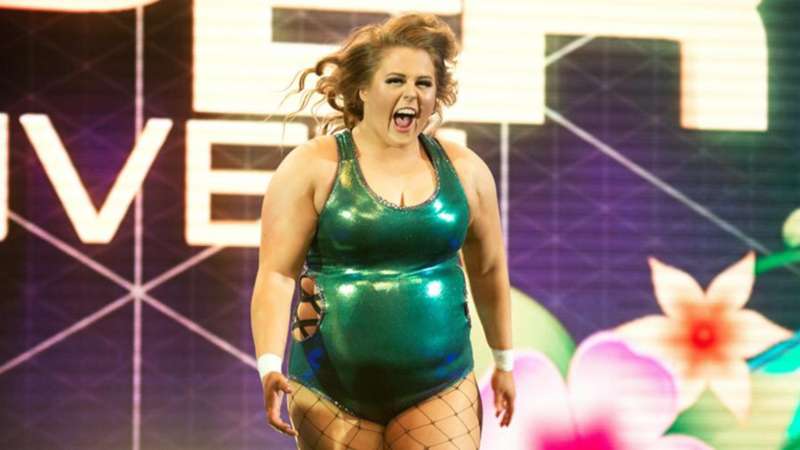 The challenger for the Raw Women's title at Saturday's WWE Royal Rumble talks about the match and more.

ST. LOUIS — Six months ago, the notion of Doudrop taking on Becky Lynch appeared to be far-fetched.

Doudrop was seconding Eva Marie to the ring as her bodyguard with a singles career not being in her future. But as fate would have it, she broke away from Marie and was on her way.

The path she's on has led her to the biggest match of her career taking place on Saturday when challenges the biggest female star, and perhaps the marquee star in the company, Raw Women's champion Becky Lynch from The Dome at America's Center.

It's her moment in the BIG TIME.@DoudropWWE challenges @BeckyLynchWWE for the #WWERaw #WomensTitle this Saturday at #RoyalRumble, streaming exclusively on @peacockTV in the U.S. and @WWENetwork everywhere else! pic.twitter.com/6BROsPYV13

A day before the match of her life, Doudrop talked with DAZN News about facing Lynch, what the match means to me, and being around Eva Marie.

DAZN: How do you characterize these last five months from walking out at SummerSlam with Eva Marie to now wrestling Becky Lynch?

Doudrop: It's been such an accelerated trajectory for me. I honestly still cannot tell you what I'm doing right because I don't know. All I hope is that I keep doing whatever it is that I'm doing right because this is just phenomenal. It can be a little overwhelming. But I'm just so grateful for every experience. I think what a lot of people forget is like I haven't had any sort of actual condition for this. I spent a couple of years in NXT UK, but it's very different. We would only be there for two weeks over the month, and then we would go home. My first TV live event was my first TV live event. I'd never been taught anything about it how to do it. I was just like, ‘Okay, we're going to see how this goes’. So literally, every week is a learning experience for me. I'm literally learning on the job. So stepping into all these big stadiums all the time as the first experience I'm having in the stadiums like there was at WrestleMania and staying and watching WrestleMania, but other than that, I have no experience of such huge amounts of people. Just thinking about standing in that room with all those people around me gives me chills there, but I'm really excited about it. It's overwhelming, and it has a lot to take in, but I'm excited for it. It's such a buzz.

Doudrop: I'm very, very grateful for it. I hope that I am who they seem to think I am. And for me, this is actually funny because I've wanted to wrestle Becky for 15 years, and I'm very new to the main roster, but I'm not new to wrestling. I've actually been wrestling for half my life. I started wrestling training when I was 16 years old. Back when I started, there really wasn't a lot of women and wrestling in the UK. There was me. There was Nikki Storm, Nikki ASH. But there weren't really many more women other than one, Rebecca Knox (Becky Lynch) over in Ireland. And even back then, she was the best of the best. My trainers had reached out and wanted me to try and get her to come over so that we could have a match with her and learn from her experience. But sadly, just at that time, as I was coming up there, she was packing up to move over to the U.S., so I never got that match. I always wanted to include having that close connection, starting from local gems in the middle of nowhere in our tiny little countries. I've always felt like, ‘Oh, she's doing it’.

She's come from a similar situation as me, so she was the inspiration. And lo and behold, 15 years later, we've gone one long circle around it, but here we are. It's so amazing that I've wanted this match for so long, and I'm having it on (the) second biggest pay per view. Not only is she the person I always knew. She’s the best of the best. She's the biggest star of the company. So it's incredible for me and trying not to get caught off about it and not to get freaked out or have an existential crisis about it. But I'm just like this is the moment. This is it. This is what I've wanted for so long, and now I'm finally getting it, and I'm going to take my opportunity with both hands.

DAZN: How have you improved since you broke away from Eva Marie?

We still talk a lot. I had to learn to stand on my two feet. I had to go into the big bad world on my own and prove to myself that I could do it and when I lost her as my safety blanket, I was scared. I was nervous. But as each week went on and got on a little bit on, had bigger and higher profile matches, (I) gained my confidence. I'm so thankful too. I feel like she really set me up for success. She really did. I'll be forever grateful to her for that. But I'm now confident that I can go out there and do it on my own, which I have been doing.

DAZN: What was your reaction when she was released from the company?

Doudrop: Oh, I cried. She plays her part so well. She'll be mad at me for giving her away, but she's just the sweetest person you've ever met in your life. She was so humble. It was cool for me to see that when she came back, every person we walked past knew their name. She said hello, she had a story to tell me about them about (and) a fun time that they had. Just such a sweet, genuine, lovely person and was just such a beautiful aura to be around. I felt like I lost a sister.

DAZN: What would it mean on a personal level not just to have a great match with Becky at the rumble but to win the title?

Doudrop: It would mean that I literally achieved my dreams. That's what every kid dreams of, isn't it when they're in the living room, and they're playing wrestling with their brothers and sisters and jumping off the couch, and the elbow drops to the dog. That's what the kids dream of. They want to be the champion. They want to hold the belt up in front of all the fans and hear them screaming for them. And that would that. Honestly, that was the dream. That was the dream when I started wrestling training. It's crazy to think that my childhood dream is within grasp in only six months. It's been such a crazy half a year. Honestly, who knows where it goes from here, but the thought that could be achieved in all my childhood dreams has my mind blown.

DAZN: There's been a lot of talk about Ronda Rousey returning to WWE at the Royal Rumble. What do you make of that possibility?

Doudrop: It's an exciting prospect because she's super-talented and one of the top girls in the locker room. Can't wait to see her at WrestleMania when I win the title.