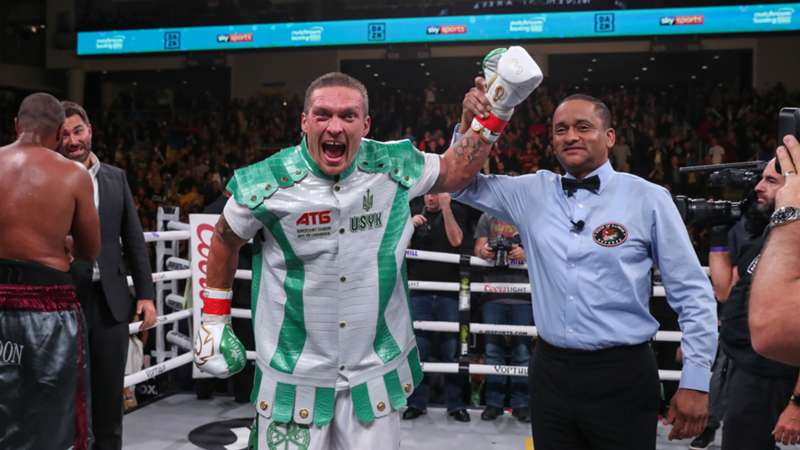 There could be a roadblock to a possible undisputed heavyweight title fight.

Back in June, boxing fans received good news when it was announced that unified heavyweight champion Anthony Joshua and WBC titlist Tyson Fury reached a two-fight agreement to face each other in 2021.

Those plans are pending if Joshua gets by Kubrat Pulev in a fight currently penciled in for December and Fury beats Deontay Wilder in their trilogy bout expected to occur on Dec. 19. But there could a potential roadblock standing in the way, and that's former undisputed cruiserweight champion Oleksandr Usyk.

"'AJ' (Joshua) has got the problem of Oleksandr Usyk," Joshua and Usyk promoter at Matchroom Boxing, Eddie Hearn told DAZN. "I think 'AJ' would prefer Dereck Chisora to stick one on Usyk's chin and take that problem away."

Usyk was supposed to face Chisora in May but the fight was postponed due to COVID-19. It is expected Usyk and Chisora will meet later this year. If Usyk wins, he becomes the mandatory challenger for Joshua by the WBO since he is a former undisputed champion.

"We have to find ways to maintain our belts as well," Hearn said. "That will be difficult for us to do because the WBO wants the winner of Pulev against Joshua to fight Usyk. So there's of different permutations."

Could there be a way for the British stars to battle it out without any belts on the line?

"Maybe Joshua against Fury is for no belts and just for the calling of the best heavyweight in the world. Who knows what's going to happen. We want all the belts to be on the line."

A Joshua-Fury clash for all four titles is the biggest fight in boxing. Hearn understands the significance it brings to the sport. But he also outlines an idea to where Usyk still gets his shot. Hearn says all Joshua wants is an opportunity to compete for all the marbles.

"The focus for the majority of fight fans is to see the undisputed heavyweight world championship (fight)," Hearn said. "That is the focus of Anthony Joshua.

"Maybe you have Joshua fight Usyk if he beats Chisora in spring (or) summer of next year (and) we do the undisputed fight afterwards. It's very important to Anthony for the belts to be on the line."