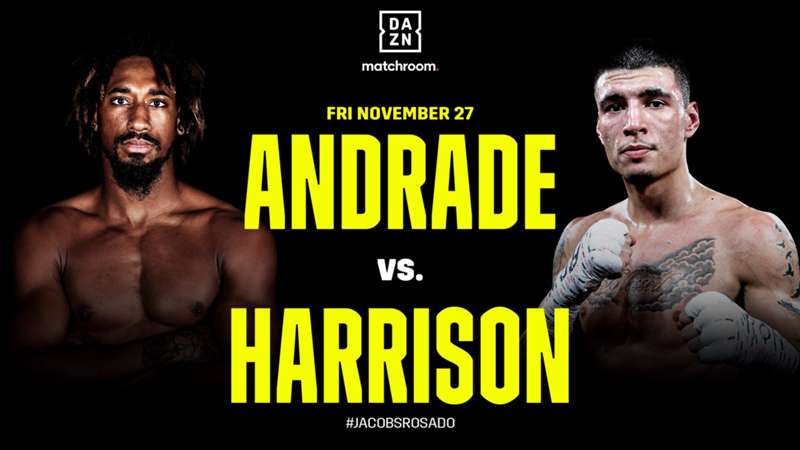 The WBO middleweight champion will squeeze in one more fight in 2020.

Things weren't looking good for Demetrius Andrade in getting another fight to close out 2020.

While it's not the high-profile bout he was looking for, the WBO middleweight champion returns to the ring, moving up to super middleweight in a non-title affair against Dusty Harrison on Friday, Nov. 27, from Hard Rock Live at Seminole Hard Rock Hotel & Casino in Hollywood, Fla., live on DAZN. The fight will serve as the co-main event of the 168-pound battle featuring Daniel Jacobs and Gabriel Rosado.

Andrade (29-0 18 KOs) fought in January, dominating Luke Keeler to win via ninth-round TKO to defend his title for the third time. For the 32-year-old, it is a chance to see how his body handles a possible move to super middleweight in the future and get another fight under his belt. Simultaneously, “Boo Boo” looks ahead to bigger and better things in 2021, whether it's a mandatory title defense against Liam Williams or fights with Canelo Alvarez, Jermall Charlo or Billy Joe Saunders.

"It's me again," Andrade said in a press release. "I thought long and hard about this, and at the end of the day, this is another opportunity for me to go out there, get another win, look spectacular doing it, and testing what my body feels like at 168 pounds. I am fighting a young, undefeated guy who was a good amateur and has been waiting for his moment. This is his moment, fighting me. I need to make sure I'm ready because he's hungry, and beating me changes his life.

"Is this the big fight I wanted, or have been chasing? No. But what am I supposed to do? Sit here and keep waiting for someone to answer the phone or accept one of Eddie's offers? I'm in the prime of my career, and I want to stay busy and fight as much as possible. With everything going on with COVID, you don't know what's going to happen. I have the opportunity to fight now, and I'm taking it. My job is to go out there, take care of business on November 27, and then 2021, it's time for one of these big names to step up to the plate. You can't duck me forever. Let's give the fans what they want and deserve to see."

The unknown Harrison (34-0-1 20 KOs) steps right into the fight of his life on a tear with stoppages in four consecutive contests. The 26-year-old plans on making the most of his opportunity and deliver a career-defining performance.

"This is the opportunity I have been waiting for my entire life," Harrison said. "This is why I started boxing. All of the time I have dedicated to this sport, I finally get my opportunity to show the world who I am and what I am capable of on November 27. Demetrius talks a big game and says he is the boogeyman of the division, but who has he fought? Then he goes out, fights whoever it is, runs around the ring, picks up a win, and goes back to running his mouth. He says that he is one of the best pound-for-pound fighters in the world, then OK, so be it, on November 27, I take his spot. I know that people are going to doubt me going into this fight, and that is fine. That fuels my energy. Keep doubting me. Andrade doesn't know what he got himself into. He better be ready when we step into that ring because I coming for him."