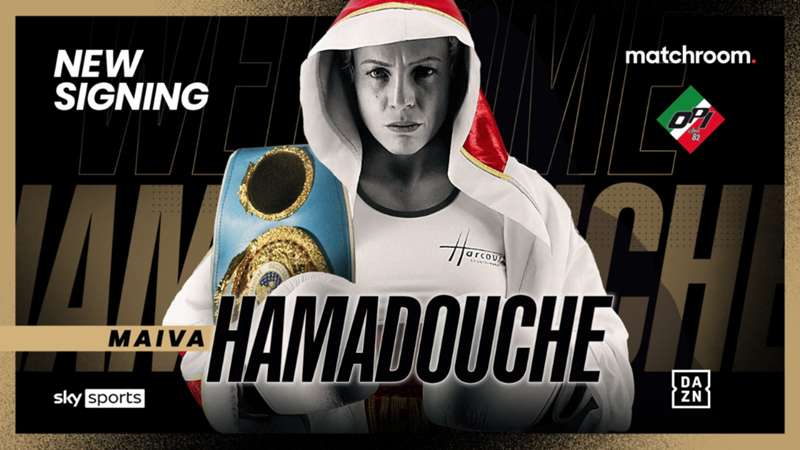 Eddie Hearn and Matchroom Boxing have signed yet another women's world boxing champion, and are set to schedule a series of unification fights in the super-featherweight ranks.

Matchroom Boxing have announced the acquisition of women's IBF super-featherweight champion Maiva Hamadouche on a multi-fight co-promotional deal with OPI Since 82.

Hamadouche (21-1, 17 KOs) is currently on a 12-fight winning streak after suffering the only defeat of her professional career to Delfine Persoon, who pushed current undisputed lightweight champion Katie Taylor to the limit on two occasions, five years ago.

The French fighter found more success after moving to super-feather, where she won the vacant WBC lightweight championship with a unanimous decision over Jennifer Salinas of Bolivia in November 2016.

Since then, she has made five successful defences of the title, but her last in-ring action was victory over Mexico’s Janeth Perez last July.

Hamadouche hopes the deal will help secure big unification fights in a division where the likes of Terri Harper and Ewa Brodnicka — both of whom are also under the Matchroom umbrella — hold other versions of the championship.

“Those are the fights that I want, she said. “I am determined to prove that I am the number one 130lbs fighter on the planet and in order to do that I must beat Harper and Brodnicka."

"It's a stacked division with Matchroom now representing three out of four of the world champions at 130lbs.

“I look forward to making huge unification fights at super-featherweight to find the undisputed ruler."

Salvatore Cherchi, President of OPI Since 82, said: “We are very happy to have signed Maiva to our team alongside our friends at Matchroom Boxing.

“For us, she is the best champion of the division, and we look forward to her proving us right. With the help of Matchroom, there are endless big fights waiting for her.”