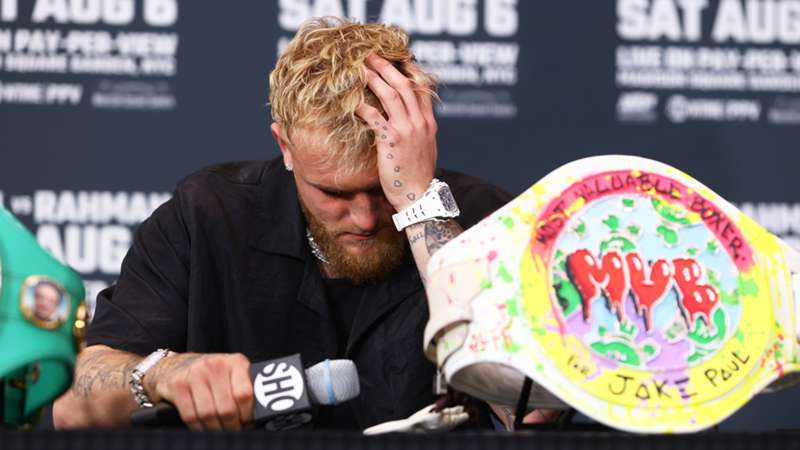 Jake Paul gives his side of why he thinks Hasim Rahman Jr. fight isn't taking place.

In a statement released by his promotional outfit, Most Valuable Promotions, on Saturday night, they claimed Rahman lied about his weight to them, the New York State Athletic Commission, and Paul.

Originally, the fight was set to occur at the cruiserweight limit of 200 pounds. Realizing he wasn't going to make weight, Rahman wanted it switched to a catchweight of 215 pounds. The request was denied and MVP canceled the entire event. Paul took to social media and explained how from his view why the fight ended up being scrapp, apologized to the boxers on the card and vowed to return to the ring for his 2022 debut.

"All righty, folks. Emergency press conference. You may have seen the news. Hasim Rahman Jr. has pulled out of the fight. This is not a joke. I am devastated. I cannot f—ing believe this. We just found out this news. This is just another case of a professional boxer, just like Tommy Fury being scared to fight me. It’s as clear as day that these guys have been so unprofessional to work with, looking for any excuse to suck more money out of this event, to coerce us into doing things. From the jump, I knew in the bottom of my heart that this guy didn’t want to get in there with me. It’s clear as day. Here’s what happened, long story short. So he signed a contract to fight me at 200 pounds and was going to cut the weight down to 200 pounds. This is not a big cut for him. He’s a big guy with a ton of weight to lose.

"He sent a video into the commission the first time he weighed in, at 216 pounds. The commission wanted to track his weight cut to make sure he was doing it in a healthy way. Three weeks later, the commission asked him for an update on his weight. He sends a video, weighing 215 pounds – meaning in three weeks, he only lost one pound. So the commission was like, ‘Hey, man. You’re not cutting the weight properly. We don’t want you to lose it all on the last day. We’re going to have to change this fight to 205 pounds. My team calls me up. They’re like, ‘Hey, man. They want to change the weight to 205 pounds. That’s a big difference. We normally fight at 190 pounds. Do you want to do the fight still?’ I said, ‘No problem. Let’s do it. 205 pounds. He already has a weight advantage, height advantage, reach advantage, all of these things. But whatever. I’ll still beat his ass at 205 pounds.’ And that was that. We move forward.

"Then today, out of nowhere, his team calls and says, ‘Hasim is not going lower than 215 pounds. If the fight is not at 215 pounds, then we’re pulling out.’ My manager goes, ‘F— you guys. You’re not in control of this.’ We already agreed to five more pounds. He is a big guy. Losing 10 pounds, everyone knows in the sport of boxing that is an easy weight cut. UFC champions cut 25 pounds overnight to make weight. A 10-pound weight cut for a heavyweight is nothing. This is clearly an excuse to say, ‘OK, the fight is not at 215? We’re out.’ The biggest payday of his life times 10 and he’s fumbling it. For what? Because he knows he’s going to get knocked out by me. The pressure starts to set in. It’s exactly what happens with all of these guys. Same s— with Tommy Fury. I’m sick of it. I’m devastated. I apologize to everyone on the undercard. Amanda Serrano, I know you were working hard. Ashton Sylve, I know you were working hard. This is absurd. There’s nothing I can do about it. I apologize for the fans. I’ll be back at some point.”

Yet again my opponents has pulled out of the fight… (1/2) pic.twitter.com/7ADOku3glx