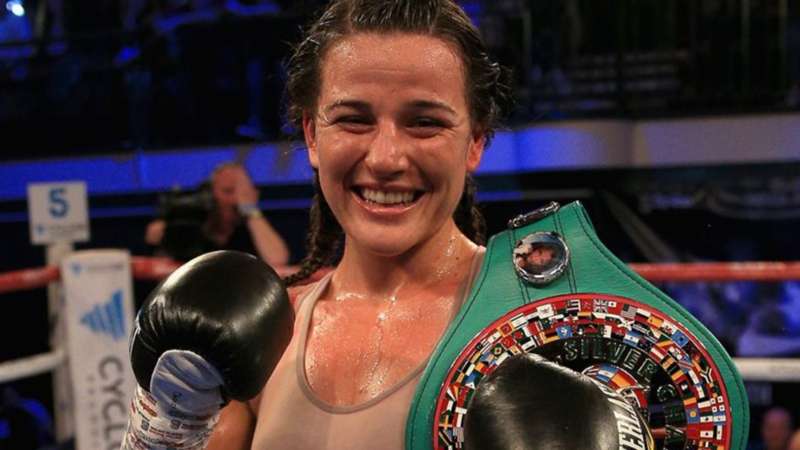 Exclusive interview: Jamie Moore has trained multiple world class fighters and puts Chantelle Cameron right up there with them.

Success for Chantelle Cameron in the imminent super-lightweight tournament will help make the Northampton fighter become a big star. That’s the verdict of Jamie Moore, the ex-fighter come trainer who has enjoyed many a memorable night on both sides of the ropes. Moore, Cameron’s cornerman, has been impressed with what his charge has shown him in their brief partnership.

With Moore’s VIP gym in Greater Manchester a hive for light-hearted banter as well as serious work, the former European champion says that Cameron has settled in well from the moment she arrived. Moore, who had no aspirations to be a trainer once his career ended, admits that he couldn’t resist plotting Cameron’s route to the top.

“Training fighters never ever appealed to me when I was fighting myself,” said Moore when speaking to DAZN ahead of Cameron’s unification fight with Mary McGee this weekend. “It was Tommy Coyle who asked me, and I pretty much just done it to help him. When Oliver [Harrison] was sick, I helped out with Martin Murray and Rocky Fielding, and I think just helping people is what I like most about it.

“Chantelle came to me, and she was really angry and disillusioned with boxing, and she couldn’t really see herself getting anywhere. That was all I needed to hear because I wanted to give her the best of me so she could push on and get the best out of herself because she’s such a talented fighter.”

With Moore now accustomed to operating at the highest level due to numerous world title fights with the likes of Fielding, Murray, and Carl Frampton, the opportunity to assist Cameron to the summit of women’s boxing is a challenge he’s looking forward to.

“There’s some problems with preparing Chantelle for fights like this because women’s boxing is still a growing sport despite how brilliant some of the fighters are. Getting your hands on footage of opponents can be quite difficult due to the lack of depth in the divisions so that’s down to me to get help from people so I can get Chantelle in the best shape possible to execute the gameplan.

“I compare it to when you’ve got a young pro in the gym, and they get matched with a journeyman from abroad. Getting information or a video of that fighter can be quite hard and that’s what it’s like with Chantelle sometimes. What helps is just how good Chantelle is. I have her sparring with lads all the time and I'm confident that if she always performs to her best then she’s going to be a hard fighter to beat.”

With Cameron’s immediate focus fixed firmly on McGee this Saturday night, a fight being shown live on DAZN, victory will see her face the winner of November’s bout featuring Kali Reis against Jessica Camara. With the tournament certain to crown a recognised number one, Moore is hopeful that Cameron will feature in more high-profile fights.

“The plan from Matchroom and Eddie Hearn is for one of these four girls to become undisputed and become a big name in the process. We’ve already seen Katie Taylor take women’s boxing to another level and if Chantelle can win this competition, then I'm hoping she can get close to that level. There’s big fights out there for her but the first priority is Saturday night and defeating Mary McGee.”