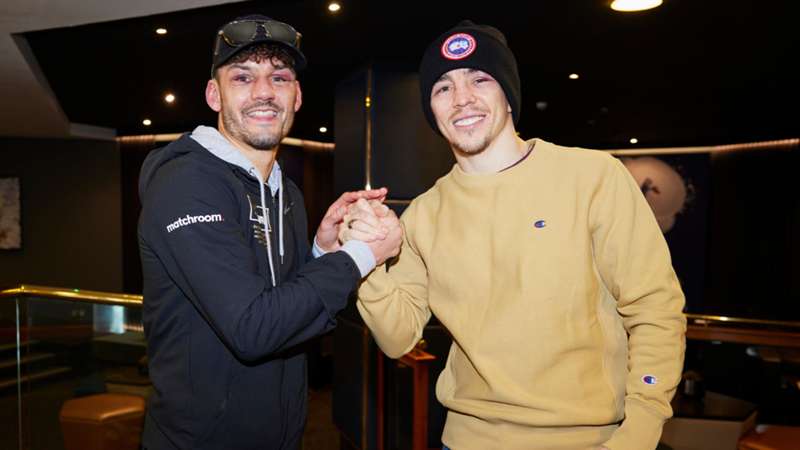 Mark Robinson/Matchroom Boxing
Watch the replay of Wood vs. Conlan on DAZN

Exclusive interview: Less than 48 hours after a superb performance and a scary last-ditch defeat, Conlan opened up to DAZN on an early contender for 2022's fight of the year.

For ten and a bit rounds, Michael Conlan fulfilled exactly what he’d do when previewing his fight with Leigh Wood during an intense build-up.

The Belfast man, arguably Ireland’s greatest ever amateur, was well on his way to replicating his unpaid form as he dominated Wood from the outset with a stunning display that was near perfection.

A vicious left hand right on the bell in the opening session floored Wood heavily, and it wouldn’t be the first time that the Nottingham warrior would be hurt as Conlan landed the same shot frequently. In the 11th round, with Conlan, ahead, Wood returned the favour as he dropped the challenger for his WBA featherweight title.

It was the moment that changed the fight as Wood repeated the trick in the fight’s final round, a punch Conlan wouldn’t recover from.

“What was Steve Gray playing at?” asked Conlan when speaking to DAZN the day after his epic contest that is surely set scoop multiple accolades at the year’s end. “It was so obvious I slipped.

"My whole corner saw it. I was having a great time in that round. Wood looked deflated to me. That moment gave him his second wind. It made me try and get a last round stoppage. But fair play to him for making his moment count.”

The shocking finale to what has been an absorbing rivalry saw Conlan take a right hand he didn’t see whilst aiming to evade punches on the ropes.

Falling from the ring into his concerned family on the front row appeared an unlikely ending as Conlan dominated for substantial portions. His fantastic start was followed by numerous rounds of domination, but looking back, Conlan ponders whether his brutal beginning cost him dearly.

“I think dropping him so soon, the first round, that made me fall in love with my power and I just go left hand crazy," mused the Irishman.

"I knew I was capable of hurting him, but he looked gone in the first round. I thought another left hand would do the job and I wasted so much energy trying to find it. If I could do it all again then I would've gone back to boxing a lot more, because I did feel the pace a little down the stretch because of the effort spent trying to end the fight with a knockout.”

Adorned with adulation due to his herculean performance, Conlan can’t accept the praise due to the to the result of the bout that provided him with his first professional loss. A brief stay in hospital following the fight saw Conlan the recipient of multiple messages as friends, family and fight figures demonstrated their concern, and although appreciative, Conlan, at this stage, can’t take any positives from the weekend’s outcome.

“I’ve lost, and it feels like s—t. This wasn’t supposed to happen for me. The message from well-wishers means a lot, but all I can think about is the loss. I went into that fight feeling so good, and for so long in the fight, I was on my way to becoming world champion. You hear so much about one punch changing a fight, and now it’s happened, I’m sick. I’ve lost and I feel so sick.”

With the fight, shown live on DAZN , earning widespread acclaim in the immediate aftermath and ever since, speculation of a rematch has been a dominant talking point amongst the boxing industry. The see-saw nature of the fight combined with an incredible atmosphere almost guarantees that Conlan and Wood will cross paths again.

“There has to be a rematch. I’ll be ready for it in eight weeks if Leigh wants to run it back. It was an absolute pleasure to share the ring with Leigh and I’m desperate to do it again. I know Matchroom loved the event, DAZN loved the event, and the fans were going crazy for it. I can understand Leigh seeing what options he has, but for me, the best fight out there right now for the two of us is a rematch.”

With Wood likely to take a break following the nastiness he endured on Saturday night, a look at that wider landscape for him will potentially include Conlan. With Kiko Martinez, Josh Warrington and Leo Santa Cruz also potential foes for Wood, Conlan already has his eyes focused on a comeback event if the fight he desires most can’t be agreed.

“We’ll go to Belfast in July or August and get a load of fans in there. I’ve got no idea on opponent or anything like that because I really want is to fight Leigh again, but I get that might not be possible. If that fight can’t happen, then I have to make decisions for my own career.

"This defeat is going to hurt for a while, but the time is gonna come when I’m gonna have to sort myself out.”