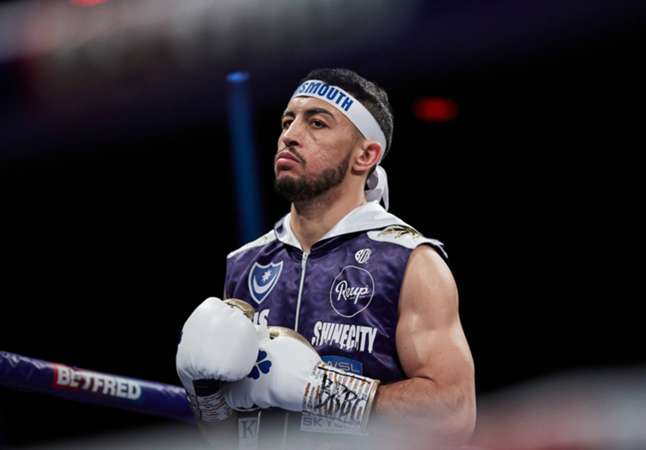 Michael McKinson is experiencing a huge fight week for the first time. Trying to pin the Portsmouth fighter down for a brief chat on the week he fights Vergil Ortiz in California has proven tricky considering the wealth of contractual obligations facing McKinson in the coming days. It’s a million miles away from where McKinson found himself at the backend of 2020.

With boxing fighting back against the COVID-19 pandemic that temporarily froze the sport, McKinson managed to secure an outing in Yorkshire as he outpointed Martin Harkin. Challenging the leading names at 147lbs in Britain such as Conor Benn and Josh Kelly, McKinson meant business. His demand for bigger fights was heard by Eddie Hearn.

“I just took the opportunity to try and get myself a bigger fight,” said McKinson when speaking to DAZN from Los Angeles.

“Basically, 18 months ago, I was still a small hall fighter, and I had to change that. I knew I was capable of fighting and beating big names, but I had to make myself my heard. That’s why I made it clear I was ready to test myself. I knew I had it in me.”

Facing Chris Kongo on the undercard of Dillian Whyte’s rematch with Alexander Povetkin, McKinson had his opportunity to demonstrate his qualities to a big audience. He didn’t disappoint. Dropping Kongo in the fight’s opening session, McKinson stayed on top and ran away a points winner. One year later, he could enhance his profile further.

In Ortiz, McKinson is facing one of boxing’s brightest prospects. Promoted by Oscar De La Hoya, Ortiz has been groomed for superstardom from day one, and McKinson is seen as the latest step on his path to world glory. Outside of his small team, few are backing McKinson’s chances, but hearing the conviction in his voice, it’s obvious he fancies the job.

“He’s not the perfect fighter. That doesn’t exist. He’s got weaknesses, and without going into them, I’ve seen what I can exploit.

"His last fight against [Egidijus] Kavaliauskas didn’t go all his own way. You have seen there that he had to come through some hard moment.

"He can be got at, he’s just human, and now I’ve got to get in there with him and prove it.”

Although he’s expecting to succeed on Saturday night, live on DAZN, victory for McKinson would be one of the shocks of 2022 despite the year being less than three months old. It’s a fight that McKinson has been aware of since November, and he’s spent every moment since getting ready for it. This is an unlikely fight for McKinson, one nobody could’ve predicted a year ago, but it’s a bout that ‘The Problem’ is relishing.

"I backed myself when I was fighting on small hall shows by asking for the big fights and here I am. I've got a hard fight in front of me, but I’ve not come this far to just make up the numbers.”