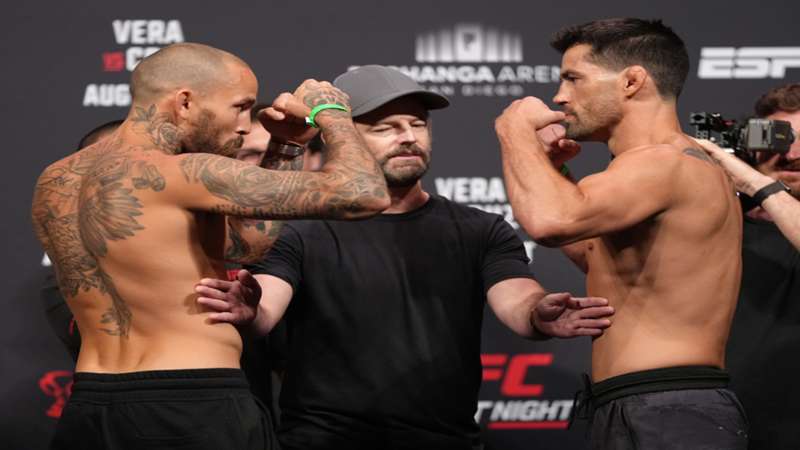 The former two-time bantamweight champion returned to action but a surprise was awaiting him.

Former two-time bantamweight champion Dominick Cruz continued his journey on Saturday towards another title shot as he took on No. 5-ranked Marlon Vera. A win for Cruz would have put him one step closer to getting a fight against the winner of the UFC 280 title bout featuring champion Aljamain Sterling and former titlist TJ Dillashaw.

But Vera's striking had other plans in mind as he kicked Cruz's head against the cage and knocked him out at the point of impact at the 2:17 mark of the fourth round from the Pechanga Arena in San Diego, Calif.

Cruz was in control in the first two rounds. He was using his superb footwork, and excellent boxing to keep Vera at bay and not feel his power. But things changed from the third round until the stoppage.

Knowing he was down on the scorecards heading into the third, Vera started letting his hands go, which paid off in spades. He dropped Cruz on two occasions and saw Cruz's spirit slowly being taken out of him.

Then in the fourth round, Vera was stuffing Cruz's takedown attempts with relative ease, and the former 135-pound was breathing heavily. Cruz almost had his back against the cage when he saw the head kick coming but couldn't move far enough as the foot hit Cruz square in the head and sent him flying to the cage and out of for the count.

Vera (20-7-1) has now won four consecutive fights and is on the verge of a title shot.

“I came to this sport to be a world champion,” Vera said in his post-fight interview. “I’m not tripping. I will keep working, and I will keep kicking ass. I’m gonna be a f—ing
world champion.”

Cruz went for a takedown to begin the stanza, but Vera stuffed it yet again. A left jab drops Cruz yet again. Cruz started to slow down at this point.

Then out of nowhere, Vera lands a flush head kick to bounce Cruz's head against the cage. He landed a couple of lefts to close the show.

He doesn't throw often, but when Vera does, he makes it mean something.

facebook twitter whatsapp
Combination staggers Vera. He's in some trouble. Cruz had a chance there to unload but chose to back off. Vera drops Cruz with a right hand but nothing else after that. Vera stuffs a takedown and lands a right. (10-9 Vera, 29-28 Cruz)

facebook twitter whatsapp
Vera goes right for a head kick but is blocked. Another combination by Cruz. A leg kick followed by a right by Cruz. Front kick by Vera about Cruz nails a right at the same time. Nice body shot by Cruz. A right by Vera. Crisp right cross for Cruz. Head kick lands for Vera right at the horn, and they stare at each other intently. (10-9 Cruz, 20-18 Cruz)

facebook twitter whatsapp
Cruz comes out firing. He blitzes Vera with a combination. A hard low kick from Cruz. Vera gets a leg kick blocked, and Cruz nails a trip. But Vera pops right up. A left drops Cruz, who makes it back to his feet. Cruz comes back with a series of kicks. Cruz is feinting and attacking, with Vera continuously looking for the big shot. A combination from Cruz ending with a body kick. A right by Vera but Cruz with another combination and a takedown with 45 seconds to go. (10-9 Cruz)

The time for talking is over. Vera and Cruz are about to go and put it all on the line.

My goodness, what an amazing fight. Fifteen minutes of rock and sock em robots. So many ebbs and flows. Too bad there had to be a loser, as it easily could have been a draw across the board. The crowd was on their feet the entire time and let both guys know the effort they put forth.

Second round for the ages

facebook twitter whatsapp
Landwehr beat the tar out of Onama for the entire second round. He dominated on the feet and on the ground with the fight nearly being stopped about ten times.

Somehow, someway, Onama found a way to escape. Quite amazing. A ton of heart.

Two women who made their UFC debuts just did the thing. They went to war for 15 minutes and had Dana White giving them standing ovations after each round.

The future is bright for the 23-year-old Jauregui and 20-year-old Lucindo. Without a doubt one of the best fights of the year. So let's see that one again.

A tremendous striking performance from Murzakanov. He dropped Clark on more than one occasion in the first and second rounds. But a straight left to the body sent Clark crumbling to the canvas. Then, Murzakanov poured it on with a barrage of punches to close the show.

Murzakanov continues his undefeated record, as he's now 12-0. Someone to keep your eye on in the light heavyweight division.

It appeared Cachoeira and Lipski were easing into the fight when Lipski connected on a right hand. That woke Cachoeira up.

She and Lipski started slinging leather and throwing their hands. A left, right, and one more left hook dropped Lipski. Cachoeira pounced with a series of hammer fists to notch the sixth-fastest KO in the history of the women's flyweight division.

facebook twitter whatsapp
Up next at UFC San Diego is Ariane Lipski (14-7) facing off with Priscila Cachoeira (11-4) in women's flyweight action in a battle of Brazilians.

In a back-and-forth affair, it came down to the final round. A left hook dropped Silva. Meerschart saw an opening, grabbed the neck, and squeezed Silva's neck as hard as he could. Finally, Silva had no choice but to tap out. It is the 27th submission victory in Meerschart's career. He's now won four of his last five.

WELL THAT ESCALATED QUICKLY!!! 😱@The_Real_GM3 delivers a club and a sub in R3!!!

Stay locked in as our live updates, results, and highlights of San Diego beginning at 7 p.m. ET.