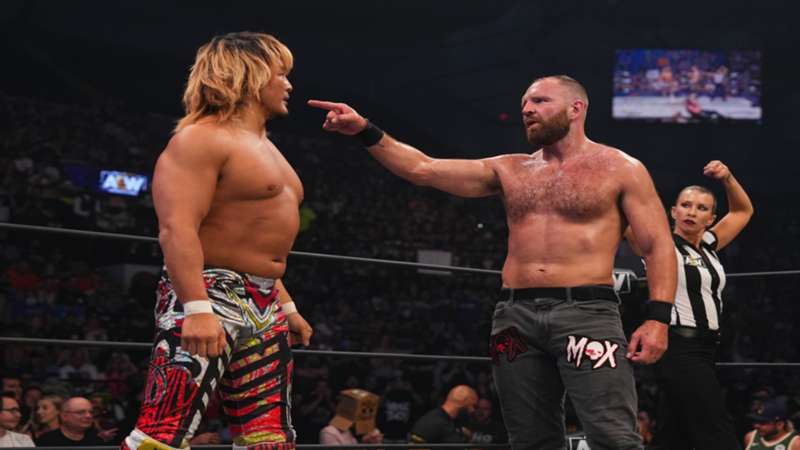 A historic event took place from the United Center in Chicago.

CHICAGO — A historic event occured on Sunday as AEW and New Japan Pro Wrestling joined forces to present Forbidden Door from the United Center in Chicago.

From top-to-bottom, each match delivered on every level. But the card was highlighted by the main event as a bloody Jon Moxley defeated Hiroshi Tanahashi in a back-and-forth physical battle to capture the interim AEW Heavyweight Champion. Moxley is the first two-time heavyweight kingpin in AEW history.

#DeathRider by @JonMoxley! What an absolute battle here in the main event. Order the #ForbiddenDoor PPV right now! #AEWxNJPW pic.twitter.com/8iTyEMNJgH

Also on the show, Jay White retained his IWGP Heavyweight Champion belt over Kazuchika Okada, Hangman Adam Page, and Adam Cole, and Will Ospreay successfully defended his IWGP United States title over Orange Cassidy in the best match of the show.

Moxley, bleeding a crimson mask, tried to finish Tanahashi off every which way. But, whether it was submissions or power moves, Tanahashi wasn't giving up.

It took another choke attempt followed by a massive Paradigm Shift to get the pinfall, and Moxley becomes the first two-time AEW Heavyweight Champion.

This should be a classic. Buckle up and enjoy.

A very good match which saw Okada hit the patented dropkick flush on Cole. White hit the Switchblade on Okada and rolled Cole over for the three count.

An awkward finish as it appeared that Cole got hurt on the Okada dropkick.

All four guys received a thunderous ovation with the slight edge going to Okada.

The fans were on their foot in unison right when the bell sounded. This should be out of this world.

That match lived up to the billing. What a tremendous technical affair. A powerful forearm, a hard clothesline followed by a powerbomb, and Castagnoli wins his inaugural AEW match.

A great way to debut Castagnoli. He got put in a high-profile position, and he delivered.

facebook twitter whatsapp
Castagnoli is the surprise opponent to face Zack Sabre Jr. He gets a monster reaction from the Chicago crowd.

#ZSJ's opponent is none other than Claudio Castagnoli @ClaudioCSRO, the newest member of the #BlackpoolCombatClub, here at #ForbiddenDoor! Order the PPV right now! #AEWxNJPW pic.twitter.com/uZdC9x5eFG

If there's a match then top the last one, it's this.

Will Ospreay retains in phenomenal match

Best match on the show thus far. After a series of near false finishes from both guys that had the crowd on their roaring for more, Ospreay hit the second spinning back elbow to retain the title.

Great storytelling that showed why Ospreay is one of the best wrestlers in the world and why Cassidy needs to get more credit for being a very good wrestler.

If you've never seen Ospreay compete, you are in for a treat.

Solid match for what it was. Wish they would have gotten a bit more time as they were getting into a rhythm.

Rosa hit the Death Valley Driver, but Storm kicked out at a long two. Storm battled back and hit the Storm Zero, but Rosa kicked out at two. Rosa came back on offense and hit the spinning brainbuster for the pin to retain the gold.

The only match on the show between AEW talent. This should be an excellent match.

Dudes With Attitudes get the win

Solid match that kept the fans throughout.

It came down to Takagi and Phantasmo. A hard clothesline and an inverted Death Valley Driver for the pin. Good to have a New Japan guy get the pin, especially with one of their top guys.

To begin things, Sting didn't come to the ring with his teammates. Instead, it appeared he was at the top of the United Center. However, he was on top of the entrance ramp and hit a splash on his foes. A cool visual.

Good match that really picked up in the last five minutes.

It began with Miro hitting a powerbomb with the other three on the top rope. He threw the others out of the ring and locked him in the camel clutch. PAC was fighting for his life but somehow made the ropes. Miro lifted him to the middle of the ring and locked it in one more time. Black slid under the ring and proceeded to spray the mist into Miro's eyes. Connors tried a rollup, but Black reversed it into an armbar.

Sliding through the ropes, PAC went to the top rope and hit the 450 to pin Black and win the belt to a massive reaction.

facebook twitter whatsapp
Right now at Forbidden Door, Malakai Black faces PAC, Miro and Clark Connors for the inaugural AEW All-Atlantic Championship. Hard to determine who gets the belt here between the four. Could go either way.

FTR has all the gold

A very good match. It came down to FTR and Romero. Harwood and Wheeler hit the Shatter Machine to pin Romero to win the belts and now hold three belts in three major promotions (ROH, New Japan and AAA).

All they need is the AEW straps. Could we be seeing FTR vs. The Young Bucks in the not so distant future?

One-half of FTR out of the match

facebook twitter whatsapp
For reasons unknown, Dax Harwood has been taken to the back. Hopefully, he's ok and returns to the match.

facebook twitter whatsapp
Up next at Forbidden Door, it's FTR (Dax Harwood and Cash Wheeler) (c) vs. United Empire (Great-O-Khan and Jeff Cobb) (c) vs. Roppongi Vice (Trent Beretta and Rocky Romero) for the Ring of Honor World and IWGP Tag Team Titles.

Huge reaction for the ROH champs. They went from heels to the most over duo in a short amount of time.

JAS gets the win

It was exactly what we said it would be. It was hard-hitting with no technical prowess. The match came down to Umino against the heels. Umino fought them off as long as he could until Jericho hit him with The Judas Effect for the pin.

The star of the match was Umino. He got a lot of near falls on Jericho and came off very well. That's how you get someone over in one night.

.@shooter_us showing so much heart but the Judas Effect by @IAmJericho knocks him out here at #ForbiddenDoor! Order it now on major providers, @BleacherReport, intl @FiteTV / @ppv_com!#AEWxNJPW pic.twitter.com/FPIL5r2pg8