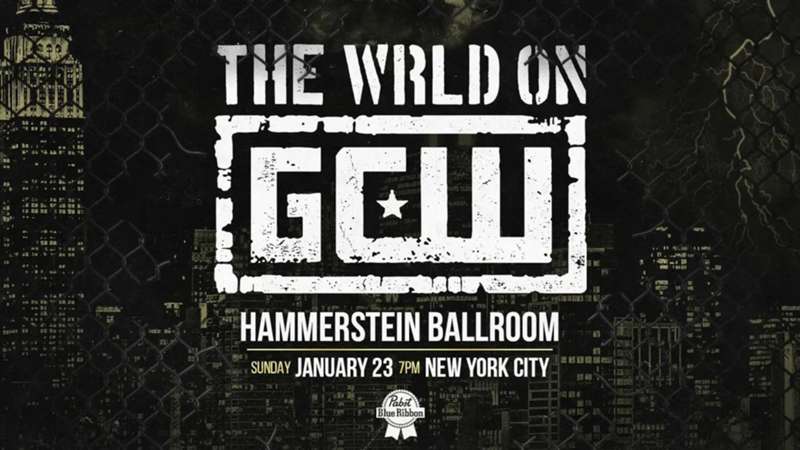 There's a new player in the pro wrestling landscape.

But there's an alternative making plenty of noise in the wrestling landscape, Game Changer Wrestling. The promotion brings a mixture of traditional wrestling for the purist, but you'll also see high-flying and hardcore wrestling.

GCW puts on their most significant event to date on Sunday when they present The Wrld on GCW from the sold-out Hammerstein Ballroom in New York City (8 p.m. ET, FITE.TV, cable/satellite PPV).

LIVE FROM THE HAMMERSTEIN BALLROOM!#TheWrldOnGCW

Before the historical event, GCW owner Brett Lauderdale sat down with DAZN News to preview the show, whether he thought the company would be where it's at, the breakthrough moment of GCW, and the decision to announce Moxley before he returned to AEW on Wednesday.

DAZN: When you started Game Changer Wrestling, did you think something like this would eventually happen to where you’d sell out the Hammerstein Ballroom in New York City?

Brett Lauderdale: I have a two-part answer for that. The realist in me says, ‘I don't know. Probably not. It seems pretty far-fetched’. There's no other way to put it than that. This is a big deal this weekend. But also, the other part of me says, ‘Yes, I did think this was possible. I've always been confident and who GCW is and what we stand for, (the) kind of the vision, the spirit, and the attitude of GCW. I've always thought this was possible. But it doesn't make it any less significant or make us any less nervous or excited as this weekend approaches.

DAZN: When did it feel for you that you thought nationally that you guys were on the map? Was it the second spring break in New Orleans, or when Nick Gage had a special on Dark Side of the Ring, or when Nick was on AEW Dynamite?

BL: There’s been several times where I've felt like this is a breakthrough. Like going back to Spring Break Two, even the first Bloodsport with Matt Riddle. Those were moments where we broke through another layer that expanded outside our bubble.

A year later, Jersey City was big. Yes, Dark Side of the Ring was huge. That was another bubble that was burst. Matt Cardona and Nick Gage, that match alone brought a lot of new eyes on us. So there's been so many times where it's multiple breakthroughs, where it was like, we may have thought, like, ‘Alright, we've reached just about everybody we can reach in this world. And then it's like, oh, wait, here we go again’.

Every time something new pops up, we get these opportunities. I think the key for GCW is that we take advantage of every opportunity we get.

DAZN: How did you become, more or less, the Vince McMahon, the Tony Khan of GCW?

BL: The simplest answer to this is, I've been good friends with Nick Gage for 15 years now. When Nick was locked in prison, I maintained our relationship. I used to visit him on a weekly or monthly basis. We always talked about wrestling and the things that he wanted to do when he got out of prison. And one of the things that we had always talked about for years when I would visit him was (that) we should do our own deathmatch tournament when you come out. The Nick Gage Invitational, that was our idea that we came up with while sitting in the visitation rooms in Trenton State Prison. So when the time finally came that he got out, I was like, ‘So we're going to do this? All right, who can help us? Who can help us do this?’

Because at the time, I didn't have a company, and Nick had nothing. We just looked into the Rolodex of some people we know that have a wrestling ring or an infrastructure already in place. That was the people who at the time were involved with

DAZN: Did it surprise you that the show sold out in less than two days?

BL: Absolutely. Joey Janella told me this thing's going to sell out quick. Other people on our team are like, ‘Dude, this is gonna sell out’. I'm an optimist, but it's a lot of tickets to sell, a lot of these tickets are expensive, and it's in the middle of New York City. I got to be honest with you; I wasn't so sure. I obviously thought we had a chance and that we could do it. But, I felt like it was going to take a lot. We were going to have to go hard on this to the day of the show, and hopefully we'll sell it out. But to see that it happened so quickly, I mean, 24 hours in, we were pretty much down to the last 100 or 200 tickets. We pulled up the ticket map, and we were literally watching them disappear and counting. I'm like, ‘Alright, we're down to like, 60. Now we're down to 50. We're down to 40. We're down to 30 ‘. Then it gets to eight, six, four, and then they all disappear. It's like, ‘Are they gone? Is it going to pop back up?’

Then 20 minutes elapsed, and it's like, ‘I'm pretty sure that the last ticket is gone. ‘We're sold out’. Once it was clear that it was sold out, it was crazy. Like, wow, we really did it, and that took like 36 hours. I was pleasantly surprised, proud, and excited for all of us, everybody.

DAZN: I think it's a testament to your company in the fact that you sold this out without announcing Jon Moxley, Jarrett-Effy, Allie-Ruby, Janela, and Cardona. You sold it out without even announcing those four matches.

BL: A lot of people keep bringing that up. That is a testament to the work that our company has put in for years now and to the level of credibility that we've built with our fans.

People at this point trust GCW. They know that they're going to get their money's worth no matter what. They trust that they're going to get something that's exciting, unpredictable, chaotic, fun, and entertaining. They know that they're going to get everything we have with every show. We don't have B shows. We don't have B towns. We don’t have house shows. Every show we do, we put everything on the line. It's not just a saying or something we promise. We've built this credibility over the last four or five years. People don't necessarily need to see a lineup in advance. They know that this Hammerstein Ballroom show is going to be a good deal. I don't think there's anybody that could possibly think that we would come to Hammerstein Ballroom with anything less than our best. That's something we're proud of.

DAZN: I want to talk about your headliner, Jon Moxley, who faces Homicide. There was a lot of talk surrounding Jon since you guys announced that he would be headlining the show. Many people were shocked because Jon hadn’t appeared yet on Dynamite. What was the decision to promote him before he even reappeared for AEW?

BL: Obviously, a lot that went into that, and probably parts of it that I probably can't talk about, or I shouldn't talk about, just out of respect to all parties. But I think the bottom line here is that Mox wants to be here. He wanted and wants to be a part of this show. He is the GCW champion, and he cares about GCW. So, you know, I think he's in a position where he's earned the ability to do a lot of the things that he wants to do, obviously. AEW most definitely respects that, and they respect Mox. It was unusual circumstances that put it all in this position. It's just one of those things. You got to call it on the fly. Of course, we defer to Mox, and we defer to AEW. He's contracted to AEW. He's not contracted to GCW, so certain things have to happen for it to happen. Mox wanted to be here, and here he is.