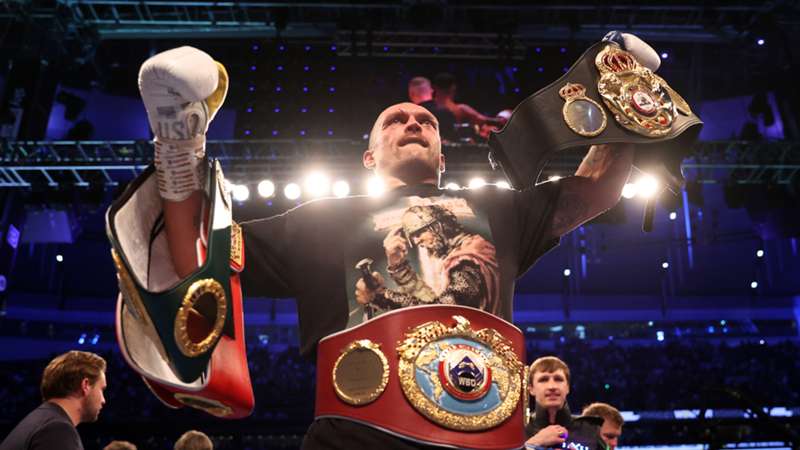 The undefeated Ukrainian neutralised the bigger fighter to make history.

LONDON — Oleksandr Usyk did exactly what he said he would do: follow an undisputed cruiserweight title success by becoming the unified heavyweight champion of the world.

Both men felt the effects of their grueling 12-round duel with damaged right eyes apiece, but the timing of Usyk — both in his punches and when he switched from patience to aggression — were second-to-none and forced most of Joshua's key fighting strengths out of the situation entirely.

Joshua had done enough in isolation to keep it close and competitive but never really left first gear before Usyk's excellent conclusion in the last two rounds sealed it beyond debate.

The result likely scuppers the previous plan of a four-belt unification between Joshua and Tyson Fury — which was the plan for the summer until Deontay Wilder legally forced a trilogy bout with the current WBC champ.

There was a rematch clause in the contract. Joshua promoter Eddie Hearn told DAZN during the post-fight show that Joshua would invoke it. On this evidence, however, 'AJ' will need an entirely new approach to do what he did after his first pro loss to Andy Ruiz Jr. and regain the belts.

In the chief support, Lawrence Okolie made a comfortable first defense of his WBO cruiserweight title when he overwhelmed mandatory challenger Dilan Prasovic, scoring a knockdown in the second round before a body shot in the third prompted the official to wave it off.

Callum Smith marked his light-heavyweight bow with a brutal second-round knockout of Lenin Castillo, which caused a scare as the defeated boxer went limp in the ring. He did, however, show signs of recuperation as he was taken away by the medical team. It was Smith's first fight since losing his super-middleweight title to Canelo Alvarez in December.

Campbell Hatton appeared extremely fortunate to get the referee's decision against Sonny Martinez, 58-57, in what was a very rough outing in the young career of 'Hitman' Ricky Hatton's son. And Florian Marku won an enjoyable main card opener against Maxim Prodan via split decision with extremely contrasting scorecards from the judges: 99-91 to Prodan and 97-93 and 96-94 to Marku.

Re-live all of the action in the live blog below.

facebook twitter whatsapp
A very good final round with both men landing hard on one another, but it's Usyk in the driver's seat once more, finishing with a flourish in the dying seconds. I've got him winning this one by seven rounds to four, with a 10-10 round as well. But there are only three opinions that matter tonight.

Penultimate round, and it's the challenger finding that extra gear rather than the champion. The fight's far from one-sided, but unless AJ can have a decent final round here, a judges' decision in his favor will look extremely out of place.

facebook twitter whatsapp
Both fighters' right eyes are roughed up pretty bad. Another tense round starts with Usyk picking off single shots at a time but ends with AJ dictating the tempo and connecting more than once. It's a round for the champ... just. This fight is gonna be a tough one for the judges. I've got the challenger one up with two remaining.

facebook twitter whatsapp
Perhaps the tightest round yet with each man getting an isolated bit of joy here and there. A 12-round fight looks increasingly inevitable. 10-10 this one, Usyk still two up with three left.

facebook twitter whatsapp
The advantage is see-sawing at the moment. Joshua wins this round with some great shots to the head and body of Usyk, but he needs to keep upping the intensity from here. 5-3 Usyk.

facebook twitter whatsapp
Great round for Usyk, who connects with plenty of great shots including one that staggers the champ back. There's a lot of chatter about the fight being even after the first six and I can see that argument, but so far my card's got Usyk up 5-2 after seven rounds.

facebook twitter whatsapp
The crowd are getting louder as they want Joshua to do more. It isn't a round for the champ to capitalise on the momentum of the fifth, however, and though the stanza comes to life a little at the end it's a relatively quiet one, edged by Usyk for a 4-2 advantage in 10-9 rounds.

facebook twitter whatsapp
AJ needed that round badly. His most assured offense yet, outlanding Usyk in the round and looking much more comfortable out there. It's still 3-2 in rounds to Usyk on the DAZN News card, though.

facebook twitter whatsapp
Usyk's timing continues to absolutely stump AJ, who is making connections but isn't getting the time or the range to show his power - and he's going to need to soon, at this rate. 3-1 in rounds to the challenger.

facebook twitter whatsapp
The fight goes up a gear in the closing minute as Usyk lands a couple of flush shots to the face of the champ and thinks he can move in, only to take a counter strike of his own. Nonetheless, that's an Usyk round. He was just that little bit quicker, that extra bit of precision per punch.

facebook twitter whatsapp
Joshua starts putting the jab to work in the second and gets in a few moderate-power shots of his own. That three-minute spell should have settled him in a bit more. 1-1 in rounds so far.

facebook twitter whatsapp
Usyk starting off well here, with fluid movement and a few really good lands. It's all tentative stuff as with a lot of opening rounds but that's a 10-9 for the challenger to get things going.

facebook twitter whatsapp
...yeah, you know the rest. Buffer finishes his big intro and the extras are clearing the ring.

facebook twitter whatsapp
And out walks Joshua. We are on the verge of a very, very, very intriguing match-up. And we'll be going round-by-round for this one!

facebook twitter whatsapp
Anthems have been sung, and here comes the challenger to a chorus of boos from this partisan crowd.

Michael Buffer is in the ring

One last 'good luck' before bell-time